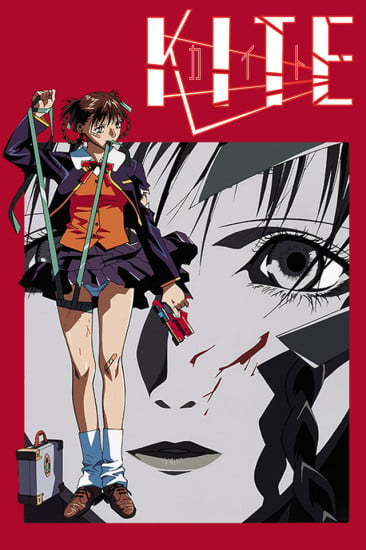 Story 4/10 Kite is the story of an orphan who was 'adopted' by a 'caring' detective who raised her to be an assasin and take out the people he deemed bad. The story was kind of bland and confusing. To be honest I'm still not quite sure what happened at some points, to me it seemed to skip around a lot. I feel the story could have gone a lot better if they didnt feel the need to have every other scene be a sex scene just to be sure they would attract customers. I mean half the time the sex scenes felt like random cut scenes/fillers you get from some cheap anime you found after accidently ending up on THAT side of youtube again.

Animation 10/10 The animation left me wanting more. Even if the story was really poor, the animation was astounding, and the detail they put into each character was impresive. The style is very unique as it's almost realistic mixed with anime (reminded me of Kill Bill Chapter 3: The Origin of O-Ren). However, the realistic style disturbingly almost forces you to remember that the story could hold some truth to it. Also, the way in which they did the blood was (again) Kill Bill style with the spurting and the impossible-amount-of-blood-from-one-person display.

Sound 8/10 Sound was nothing special in my opinion. The quality was good (didn't waver in and out) and it did what it needed to do, but if you had subtitles on I honestly don't think it would make much of a difference if you muted the movie and listened to some tunes.

Characters 4/10 One of the worst group of charcters I've ever encountered. An assasin with no spine, a hyprocritical perverted detective, a hyprocritical perverted detective's friend, and an underdeveloped male companion character that is suposed to support the protaganist but fails miserably. It was one of those situations where you think it will get better, you think it will get better, and then it either ends or they all die. Either way it left me feeling unsatisfied with the characters' development, and annoyed at the unfulfilled forshadowing.

Overal 6/10 One of the best assasin animes I've seen in a while. Definatly not a chick flick, never seen so much blood, sex, and guns in such a short amount of time before.*laughs* So overall, if your need a testosterone fest then this is the right movie for you.

P.S. You should watched this on a stream via internet. Netflix supposedly sensors the sex senes which are key in charactor/story development (even if they overdid it a tad).

Sawa is a rather interesting character as she seems to only have two emotions, mysterious and shouting out. Seriously, out of all the characters, she being a main character should have more then those two emotions. It also seemed that there were more scenes of Oburi or Akai instead of Sawa.

The English Voices were hard to hear as I had to keep turning it up to listen to the voices, then turn it down at the sex scenes and fight scenes because of all the screaming and yelling in it. The music didn’t stand out at all and really needed to be turned up a hair. Sawa was actually done pretty well for what it was worth though she was reading most of the lines it seemed.

This review contains spoilers and will tell you exactly what youre confused about.

Sawa is given the blood of her murdered parents in a pair of beautiful red earrings, which are used to blackmail her into becoming an assassin. You see her go on a few missions and she uses exploding bullets. The animation for the exploding bullets influenced a lot of anime since 1998, as this was the first.

The art style is completely unique. I'm obsessed with it. I love his other works.

Sawa meets a boy Oburi, who she likes and they decide to run away together because she's really tired of being sexually abused by Akai, who is her caretaker and a dirty cop. He tries to do a few missions before they leave, but they're out to have him killed now.

Sawa and Oburi fail to get away and it gets Sawa assaulted again. Akai also set up her parents' murder. Sawa finally kills the dirty cop duo, but on the way home Oburi is murdered by a child assassin. The one whose basketball he shot earlier on. The cycle never stops. It ends with Sawa waiting for him with their cats, not knowing he's dead yet.

Before I start I want to say that this will be an upset response rather than a review as you can see by my rating.  I have only watched about 20 minutes but it was long enough to leave its impression. This will contain minor spoilers but there's not a lot to miss out on in my opinion.

I'm a fan of Gekia and approve people's right to takle dark subjects about society and the human condition in the hopes of raising awareness, yet any power can be corrupted.  The anime all in all is about an assassin android roughly 12-15 who is being asked to kill dregs of the earth such as murderers and pedophiles yet her master is in a sexual relationship with her as suttely shown in a scene. Besides that condradiction what made me turn it off was the fact that in a long scene there were pictures making up the background were pictures of real life murder victims.  I wanted to let it pass since I remember seeing a large photo of the famouse Vietnam shooting picture in Stardust Memories but then I put the pieces togeather. In Stardust Memories the photo was put there to reflect on the gritty side of man when all about in the first world seems to be ok, in Kite they were just there to show just how much you can get away with in making an OVA.

On the "good" point about this anime I have to say mid that it can show just how smutty the otaku culture can get when you make an OVA compared to tv.  If your watching it for something retro to watch or for cultural purposes then go ahead but take my advise, "may contain some scenes that some viewers may find disturbing".

It's not a movie. Update someone and specify a studio pls.