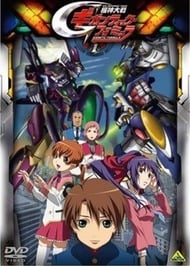 StoryBlah... blah... blah. This is the language with which Gigantic Formula tells its story, the language of tedium. In fact, it’s so insanely boring that snatched glances at my wristwatch became a satisfying distraction. Luckily, my optimism recovered somewhat after downing copious amounts of wine somewhere around the middle episodes. If I didn’t slash my wrists afterwards, I reasoned, I’d at least be packing enough emotional pain to whine about it in a review. So here we are. Leading the spring 2007 line-up, Bokurano tells a tale of brats trapped in a malicious game while Tengen Toppa Gurren-Lagann decorates its brawny content with explosive personalities and a funky animation style. Both offer fresh twists on their well-trodden mecha genre to catch the attention of new generations of fans. But what of Gigantic Formula’s contribution that season? Well, it’s certainly more miserable than all the others – think a po-faced Gundam SEED or a straight-laced Neon Genesis Evangelion - but other than that, it comprises the exact same trash that every other mecha show tries hard to overcome. Through a bizarre set of circumstances, whose exact progression is unimportant drivel, a child called Shingo ends up piloting Japan’s champion mecha against the mechs of other countries. From this lacklustre springboard the story somersaults through a series of staged duels, dull pilot training scenes, and irritating flashbacks. At some point someone describes the mecha using the line: ‘Their power has deep connections with the Translator’s and Pilot’s emotions and strength of will.’ Oh wait. Do I smell a psychologically damaging relationship between robot and pilot? Hell, yes I do, and it stinks! Follow scenes of all the pilots (apart from mindlessly happy Shingo) trying to stop their brains melting through repeated use of their machines. All the while, Shingo’s partner Mana walks around like the token bug-eyed, eternally-depressed psychic that every mecha series tosses off – sorry, tosses in – for occasional fanservice. She knows something about the mecha nobody else knows, see, and she’ll do her damndest to express it in unhelpful riddles. All this bull comes complete with a self-evident ‘war hurts’ theme designed to patronise rather than amuse its core audience. But the real tragedy of the show is this: despite its transparent plot, Gigantic Formula  could have been salvageable. To recap, there are gods in the freakin’ mecha. Mechs are cool, but mechs with the power of gods are even better! Not only that, Shingo’s Susanoo is no less than the god of war and bloodlust! Nothing should go wrong – nothing! But alas, Gigantic Formula brings VERY LITTLE ACTION to the table. And when action happens it comes in the form of CLUNKY CGI. And when the action is finished EVERYONE SURVIVES. The government goons spend more time poring over Shingo’s compatibility stats than actually letting him fight. Slavering adherence to well-worn ideas is one thing - in retrospect, the terrible title provides too stark a warning to even feign surprise - but after watching this show limply fellate one cliché after another in a gigantic orgy of formulae and not even have the wit to compensate with sparkly battles, my judgement can be summarised thus: Gigantic Formula? Gigantic shit.AnimationWhen I was a fledgling anime fan, two giants could stand opposite each other and grunt for hours on end – as long as Sunrise or Bones were animating the scene, I’d consider it the most earth-shattering battle since David and Goliath! Nowadays, I need a little more convincing. Ten years ago Gigantic Formula would have rocked the animation universe; today, its CGI looks awful – Voices of a Distant Star awful. It delivers fights as dazzling and kinetic as a rolling turd, where bog standard robots stagger into battle wielding blunt instruments yet miraculously causing no exciting damage. Moreover, stylistically gloomy, Gigantic Formula brings sombreness to a genre famed as much for its clash of primary colours as its clash of titans. Where Gundam SEED is an ADHD-inducing happy meal Gigantic Formula is gruel. Gruel with extra helpings of cardboard. In fact, the series merely strips away everything that makes mecha fun to look at, like taking all the rides out of a theme park and replacing them with libraries. And the cast walk around like its bookish staff - sad, and weird, and strangely similar-looking. Its single redeeming feature is the cell animation, which is clean and delivers on fluid motion.SoundWhat a terrible opening theme. However, the rest of the orchestral score sounds serviceable, often even enjoyable.CharactersOnce a week I like to refresh my fridge and kitchen cupboards with staple foods: milk, bread, canned tuna, apples. Gigantic Formula likes to stock up on stereotypes. The cast is a shopping list of characters rather than a coming together of genuinely involving people with a substantial stake in the plot. At most the show trudges episodically through the backgrounds of the pilots of each country, often manipulative tearjerkers whose only impact upon my emotions was to kill them off bit by agonising bit.OverallIn a market where fossilised mecha clichés have endured since the seventies and any fan of moderate experience would have seen them time and time (and time and time) again, Gigantic Formula takes a foolhardy stab at giving the teen-inherits-giant-robot narrative a facelift. Earlier works such as Neon Genesis Evangelion grossed millions, so it’s not the show’s fault that its copy-paste optimism was utterly misguided. I can’t blame it for trying. There my generosity ends, however. I’ve seen the mediocre and survived the downright terrible but rarely have I suffered mimicry of such unparalleled craptitude. To the ‘Brains’-Base team behind this crass derivative I say: try again. Or, on second thought, do your fans a favour and give up your day job. If there is a formula in this day and age for making an entertaining mecha series, you just proved you don’t know it.