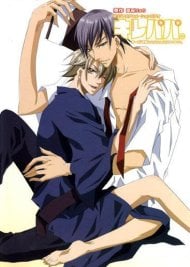 Even if it was only a two episode OVA, this is probably the worst anime I have ever watched. Everything about it is awful. I doubt anyone really cares about getting spoiled about Kirepapa, but I am just going to warn you that this review does have spoilers. I usually try to avoid spoilers in my reviews, but a lot of the GARBAGE that I want to talk about surrouding this show involves spoilers. The story is very creepy. It is about a dad named Chisato, who is for some reason convinced that every single male in the entire universe wants to sexually assault his son, Riju. For some reason he just assumes that everyone really wants to molest his son, which makes absolutely no sense and he has no reason to think that. Riju has a best friend named Shunsuke, who Chisato hates because he assumes that Shunsuke wants to molest Riju. In the end, it turns out he was wrong and that Shunsuke is actually into him (Chisato). Even though Chisato was straight beforehand and even though Shunsuke is only 15, they end up dating. It is incredibly disturbing and creepy. To make things even creepier, in episode 2, Riju, who is only 15, starts dating an adult man. It's all very gross, but the show treats it like there isn't anything wrong with it. In episode 2, Riju's grandfather (Chisato's dad) is introduced, and he is obviously disturbed by the fact that his 30-something year old son is dating a 15 year old and that his 15 year old grandson is dating an adult, but the show treats it as if the grandfather is the bad guy for being against their relationships, when he is the only sane one! It's all really disgusting. The animation is awful. We are told that in-universe, Chisato, Riju, and Shunsuke are all supposed to be considered really beautiful, but they all look really, really ugly. The characters oftentimes make really disgusting faces. The sound design is bad. There's no opening or ending theme and the music they use throughout the show really doesn't fit the situations most of the time. When the music starts in a scene, it oftentimes sounds really jarring. Also, the voice acting isn't the best. I mean, it's not completely terrible, and there are some well-known voice actors in it, but it's just not very good. I don't know if it's because it would have been some of the actors' earlier roles, so maybe they weren't that good at it yet, or if they just weren't taking it too seriously. Kouki Miyata as Riju sounded particularly bad. The characters were stupid and awful. They were pretty much all disgusting people, and none of them were even slightly well-written. Overall, I hated everything about this. It is pretty funny, I guess, if you like so-bad-it's-good stuff, but even then I think there are better options out there in that category.

The world of BL is filled with manga/anime like this one: a shallow story with flat characters, numerous-and therefore difficult-to-accept-as-realistic coincidences, low-quality animation, and drama for the sake of drama, otherwise known as one of the lowest forms of entertainment: melodrama. Story: Barely existant, the first episode consists of Riju's father, Chisato, trying to scare away his friends because he's paranoid that they're out to have sex with Riju and then Riju's friend Shunsuke confessing his undying rabu for Chisato. In the second, Riju is revealed to have  a boyfriend, then everyone ends up at Chisato's family's inn and no one wants to recognize anyone else's relationship. Yawn. Animation: Again, average, boring, fairly low-quality. Understandable, because who gives budget to things that appeal to a very limited audience and won't make any money anyway? Characters: I have a big problem with a character's personality being defined solely by their status as seme or uke. It makes every single seme the same and every single uke the same, and therefore everything else becomes formulaic--and why would I want to watch the same thing over and over? Furthermore, when the only aspect of a character is their reaction to someone else (Chisato's character IS that he's overprotective of Riju), the characters come off as shallow, flat, and uninteresting. Overall: A BL fan can choose to steadfastly ignore the fact that the majority of BL is crap, a behavioral pattern usually followed by batshit uguu~ fangirling over it. Definition: most BL fangirls. If you fall into this category, I'm sure you will enjoy Kirepapa. Then, once you're done enjoying it, please grow up and become a member of reality. The alternative is to recognize the immaturity of the BL industry and expect better out of it. As a fan, I watch the few things that get animated, because I keep hoping for better. I usually end up regretting wasting my time. There is a core canon of decent webcomics, light novels, manga, and so so few anime: things that don't fall into mediocre obscurity. If this sounds like you, stick to that stuff and skip Kirepapa.

Great for a good laugh if you want an overly dramatic comedy filled with misunderstandings, misconceptions, and guaranteed conflict of interests between various main characters. However, if you're searching for something that has a meaningful message, don't watch this one. There are better ones out there. 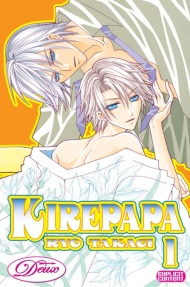