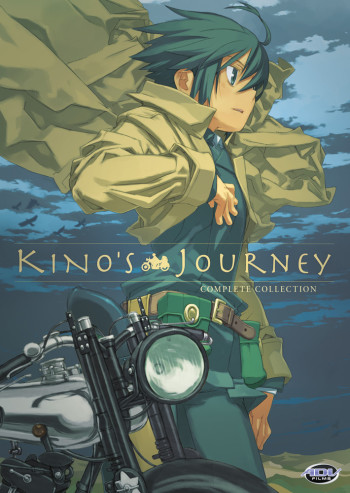 Earth has become a dried-up wasteland, and thanks to dwindling supplies and no more potable water, mankind will soon become extinct. In this desolate place, two travellers wander the landscape, documenting what’s left of humanity to leave a record for a future generation...

When I read Noru I first thought of Kino's Journey. Both follow a protagonist who wanders the land, encountering remnants of humanity and promising to not interfere. Both are melancholy, wistful and lonely, and will certainly appeal to the same audience.

Both stories feature travellers discovering new things and places (although in “Girls' Last Tour” it’s more of a post-apocalyptic survivalistic wandering, while Kino travels to many different countries in order to get to know them). Both can also be seen as philosophical parables, where human nature and culture are examined. There is an appreciation of simple, yet elemental things in life as well in them.

So far “Kino’s Journey” is more disturbing and developed, while “Girls’ Last Tour” is quite simple and more lively, but both stories give me a similar reflective feeling and both are definitely worth checking out. Despite featuring bleak conditions, there is an appreciation of life in them.

Years after the end of the world, two girls tour the ruins of Japan.

Utsuo's grandfather died on the boy's sixteenth birthday, at the old age of 140 years. He left behind a love of motorcycles – a trait that Utsuo shares, much to the dismay of his family. Living day to day underneath a dome that protects the city from the toxic outside air, the boy has become complacent with his life, and soon finds himself on a thrilling adventure...

In a dangerous land where fantastical creatures exist, humans must live beside dragons and other supernatural monsters. That’s where Mythical Beast Investigators like Ferry come in. Ferry might look like a young girl, but she has extensive knowledge of magical creatures and dreams of creating peace between humankind and monsters. With her otherworldly bodyguard Kushuna by her side, Ferry will work to calm any conflict, no matter where that takes her!

Koguma, a high school girl in Yamanashi. She has no parents, friends, or hobbies, and her daily life is empty. One day, Koguma gets a used Honda Super Cub motorcycle. This is her first time going to school on a motorcycle. Running out of gas and hitting detours become a small source of adventure in Koguma's life. She is satisfied with this strange transformation, but her classmate Reiko ends up talking to her about how she also goes to school by motorcycle. One Super Cub begins to open up a lonely girl's world, introducing her to a new everyday life and friendship.

A lonely boy wandering the Arctic regions of North America meets a wolf, and the two become fast friends, depending on each other to survive the harsh environment. But the boy has a history, and the wolf is more than meets the eye as well …

A strange young girl lives in the old, forgotten Kisaragi rail station. She sees humans go by on the train, and she wishes she could speak with them. When one man accidentally stops and talks with her, the conclusion of his story becomes the trigger that sends her off on a journey of her own. She becomes a train conductor and heads off in search of her home, but she meets others with their own troubles along the way.