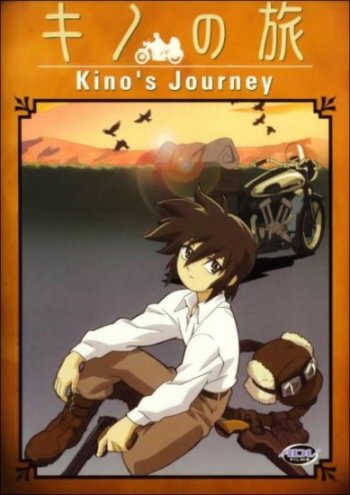 Based on the 2003 Kino's Journey anime, this is an "episode 0" for the series, although really its just another story, just done after the anime itself was finished.

Story: Kino is a traveler who visits various countries with her sentient motorcycle Hermes. In this special, they arrive in a country where everyone spends their whole lives working on building a huge tower. Its so tall, it goes off into the sky. While here, Kino meets someone rom that country who questions what they do. The story is ok. The movie doesn't really answer the "why" of anything, but it presents an interesting scenario and I liked seeing what would happen.

Animation: This looks ok. Not amazing, but more then acceptable. Like the 2003 Kino's Journey anime this has artifical scanlines put over it. This is a bit weird, and probably unnessesary, but it isn't a huge deal in my opinion.

Sound: The Japanese VA's are good, and there is nothing particularly bad. The sound design is decent, and helps the atmosphere of the story.

Characters: There isn't much of this. Kino and Hermes are just kind of there, and the questioning person isn't that interesting. This special, like the show from what I know, is more about experiencing the country then about character stuff.

Overall: While it may seem like I'm describing something that isn't really notable, I enjoyed it. There isn't much to it, but as something to just sit back and experience for 12ish minutes, I enjoyed it.