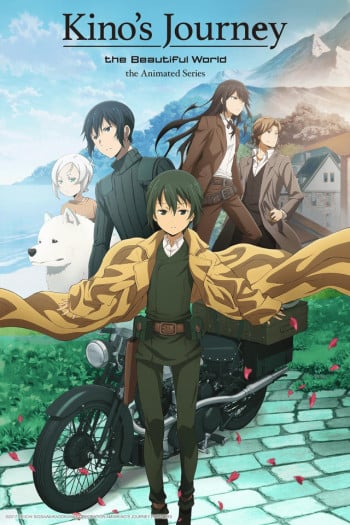 A Country Where People Can Kill Others

Two young girls travel through a desolate landscape in search of food, water, and fuel for their precious Kettenkrad motorbike. Although the world they wander through is a lonely one, Chito and Yuuri find happiness in the little things they encounter on their journey: a forgotten supply of military rations, a hot bath thanks to a leaky pipe in an abandoned...

Both contain philosophical elements and two traveling companions journeying through a beautiful but dangerous world, observing and talking about it.

both shows are about lighthearted journeys, while they cover heavier themes like the everyone's individual purpose for living or the darker side of humankind. Whether it's the beutiful world, or the philosophy the show brings to question, both are sure to captivate and draw you in.

Why do I think Mononoke and Kino's Journey are complimentary? Although these two anime seem very distant in the topics they represent they are actually quite similar.

One, they both deal with a traveling hero who is searching for adventure. Kino is more passive than the Medicine Seller (who actually does interfere and actively solves problems) but at the heart of Kino's Journey there is an element of how her presence affected the people in the towns she vistis and how the visit affects her.

Two, they both delve into the human psyche.  Mononoke tends to be darker in that it is dealing with the manifestation of actual monsters, but they are really conceived from some form of human emotion and failing.  Kino's Journey tends to deal with this darkness with a more realistic portrayal of human nature although the settings are still fantastical.

Three, both are told in a very unique episodic way.  The new Kino's Journey (there is an old one go check it out!) is told so that each episode is completely stand-alone. Mononoke has short arcs that are also stand-alone.

If you have watched one and liked it, watch the other!

Welcome to a world in which memories can be transferred from body to body; old painful memories can be removed and replaced with new ones, and the poor sell their bodies to the rich to survive. Waking up one day, Kaiba finds himself in a strange place with no memories of his past and a mysterious hole in his chest; the only clue as to his identity is a locket...

Both animes explore different cities that serve as an allegory for the viewer to explore philosophical questions, values & morals.