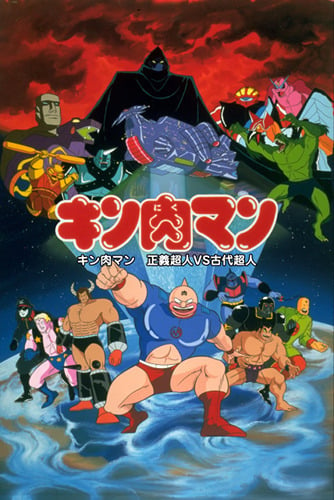 If you're looking for anime similar to Kinnikuman Movie 3: Seigi Choujin vs. Kodai Choujin, you might like these titles.

The episode covers the Planet Rakka story arc. A young boy from Planet Rakka named Beansman asks Kinnikuman and the others to help save his planet from the Space Samurai's led by Black King.

While the New Generation Choujins are taking part in Fan Appreciation Day, The Cyborg arrives, takes Meat hostage, and challenges Mantarou to a fight inside Tokyo Tower.

Enter the semi-futuristic world of Neo Pro Wrestling -- wrestling that uses specially powered armored suits to boost a fighter's capabilities. Miku is an average teenage girl with the intent on becoming the best ever, even surpassing her idol, Aquamarine. Along with her teammates: Ginko, Sayaka, and Nana, the Pretty Four, can they go from rookies/pop idols to the champions of Neo Pro Wrestling?