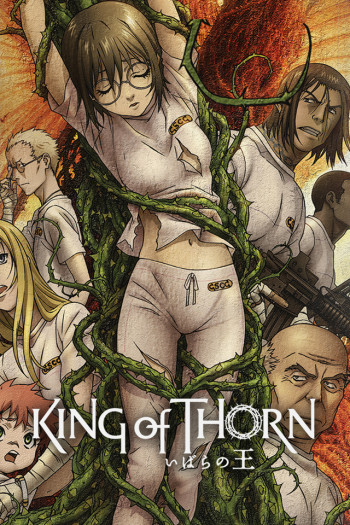 In the beginning, King of Thorn was excellent. The animation is fantastic (even the occasional lapses into animating the characters in CG are forgivable), I really enjoyed how the premise was explained (widespread panic caused by the 'Medusa' virus with a 100% fatality rate), and where it looked like the story was headed (post-apocalyptic survival/horror). However, somewhere along the line it fell apart.

At one point during the movie I thought to myself "That was much better than I expected, I wonder how they're going to tie this up" (i.e.- I thought it must be almost done), and then noticed that the movie was just shy of being merely 3/5ths of the way through. At about this point is where things started devolving. King of Thorn throws plot twist after plot twist, each more ridiculous/stupid than the last until the film's original purpose and storyline is all but forgotten. It struck me as a very soulless work- like something a computer could have made. Everything is cold, calculated, and very genre. The only thing that will ellicit any emotional response is the gore (either shock or, in my case, squeals of delight). Having said this, the characters are pretty adequately fleshed out for the format (film characters are generally subpar to their series counterparts who have far more time to develop naturally), despite the movie's own admission that they are stereotypes.

King of Thorn would have been worthwhile for me, were it to stick to the survival/horror genre instead of venturing into hokey and poorly-realized sci-fi. The ridiculous Sleeping Beauty references didn't help things either (I'm a big fan of fairy tales so I was less than impressed by their being used for nonsense).

King of Thorn is a movie that doesn't know what it wants to be.  It starts off as a sci fi horror story, but then morphs into a psychological fantasy.  The path between those two roads is, (pun intended) a thorny one and the transition between the two is not smooth nor do I feel the journey is successful. I'll explain.

This movie starts out with this premise: There is a new virus killing off the world's population. The Medusa virus is 100% lethal and there is no known cure.  An offer is extended to 160 infected candidates: to enter a cryogenic chamber to be frozen and cared for until such time as a cure is found. The lucky participants enter their sanctuary only to find things have gone horribly wrong when they awaken. The machine entrusted to provide for them has seemingly been deactivated, there are no living people anywhere in sight, their resting place has been covered with painful thorny vines, and vicious monsters attack them as soon as they have been released from their chambers.  With no cure for their ongoing and progressive Medusa infection in sight, the survivors must begin a terrifying journey of survival out of their resting place to find out what has happened to the world outside their haven.  A truly suspenseful horror setup.

But midway through the movie, there is a change. This simple and effective story progression suddenly gets confusing, as the story focuses more and more on the personal relationship between one of the survivors and her non-participating sister. Character development for the other characters is nearly nonexistant, and the story's clear presentation evaporates. It would be a spoiler to tell the new plot direction, but it is safe to say that the horror/survival aspect of the movie is no longer the raison d'etre of the movie nor the focal point of the plot.

The new plot is full of twists and convolutions in an attempt to make it more interesting, but this only serves instead to muddle the direction and clarity of the story. And since the new focus of the story is dependent on the relationship of the two sisters, one character, the girl survivor with the twin sister outside, receives a lot of characterization and background. The other characters involved are cast aside and are very scantily developed with a tiny bit of backstory added for a few of them, and nothing at all given to us for others. There is little to none for character development, not even for the main character. She is essentially the same person at the end of the movie as she was in the beginning. Perhaps some slight character development was given her, but essentially she does remain the same.

Animation is generally good quality, although there are some jarring attempts to insert CGI graphics that are not well integrated. Sound quality is also more than adequate to the task, with obvious but effective musical background relating well to the story, and sound effects that match well with the onscreen action. No complaints about the voice acting, either.  There are no real stand out performances; this means that while there are no superlative character interpretations, there are no glaringly problematic presentations either.

This movie could have been much better than it ended up being, if it had stuck to its original story and not tried to change everything midstory. It had the potential to be a thrilling horror vehicle instead of the mixed up and disorganized fantasy it became at the end. Not a bad movie, but definitely a skip if you are wanting to watch a horror film.

ART: Well..... Appearently this won an award for Asia Pacific screen award for best animated feature film. I wonder why since the CGI sucks ass. For the most part it looks fine but some of the CGI stuff looks just horrendous. When this happens it just rips you out of the story.

SOUND: No complaints here. Overall the sound is better with movies than series and this anime is no exception.

CHARACTERS: Main character is Kazumi. I apologise for making this so short but there is not much that I can say here. It would either tell you everything about the story or the plot.

STORY: Humanity is living in fear of the Medusa virus. This mysterious desease slowly changes its victims to stone and there is no cure. Kazumi and Shizuku are twins who are both infected by the virus. Kazumi is lucky enough to be chosen to be cryogenically frozen untill they find a cure but is sad that this would leave Shizuku behind alone. She gets to the lab and things go downhill fast. Instead of waking up cured she wakes up to Hell on Earth. The facility is covered with strange vines and monsters roam around freely. After most of the patients are killed by the monsters only a few escape the cryo chambers alive. They start a desperate treck to the surface while trying to stay alive. Meanwhile they wonder what happened and if their loved ones are still alive.

RANT: I actually have the manga of this and for a long time I hesitated about picking this movie up. The manga contains 5 volumes and it is rather good. I have forgotten why I eventually decided to get this movie but I obviously did.

I can honestly say that, looking at the 2, the manga is far superior. It is very hard to condens 5 volumes into a single movie of 60 minutes but they did it. I have to give it to them that they did a good job of it too. Unfortunately for them I was familiar with the manga so I'm always comparing.

Trying to take a step back and looking at it without thinking about the manga is very hard. Parts of the story was changed for the movie but that is usually the case with adaptations so I'm fine with it.

If you are not familiar with the manga than you may like this movie for the surviver horror feel it has. If you have the manga then don't watch this as it will only disappoint you. If you debating on which to get decide for yourself. The manga is better but the movie is much cheaper to get and with publisher Tokyopop no longer here I don't know how easy it is to even get the manga.

EDIT: let me preface this by saying check my stats to verify that I am a pretty knowledgable critic and this movie deserves everything I give it.

i felt pretty emotionally attached to the girls in the beginning with the whole end of the world scenario, but i slowly came to hate Kazumi more and more as her character was developed.

Literally, she should have (and tried to) kill herself well before this whole movie took place.

The story is interesting and makes sense, BUT IT ALL ARISES BECAUSE KAZUMI IS A LOATHSOME CHARACTER.

I suppose they kind of wrap up with an explaination at the end, but they don't say how the world will be saved, they just imply that there will be survivors....

I found myself glaring at the screen watching this, and dislike multiple characters, while not comprehending their motivations.  NOT WORTH MY TIME.

and thinking back, it is an interesting twist at the end, but goodness i hated everybody, Marco was a thug and did too much for that girl.

Despite technically a well made movie, there are some major issues in the storyline. The film changes tack halfway and decides not to care anymore about the killer disease that threatens humanity. Instead that part is only used to dispose of characters once they are not needed any longer. The second storyline is becoming increasingly far fetched, despite some kind of wrap-up on the end. The movie meanders between overly gory details and its storyline, making the gore rather gratuitous than essential. On the whole King of Thorn is a solid choice if there is nothing else around, but certainly not a feature film.