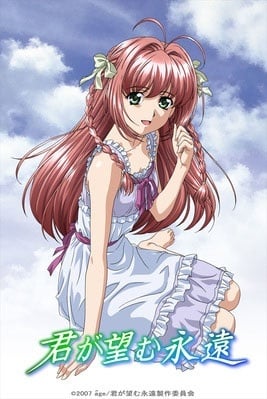 Customary Disclaimer: As can be expected, this OVA is a follow-up to the actual series and spoils much. In context of proper discussion, this review will do so as well - read at your own discretion.

That said and done, Kimi ga Nozomu Eien ~Next Season~ is a rather "interesting" take on the main series, as it touts itself as an alternative ending without actually portraying a different set of events. The opening sequence, at the very least, makes little to no initial sense, as it starts with Mitsuki bidding farewell to a happily-paired Haruka/Takayuki couple - a certain non-sequitur to the main series if I've ever seen one. Much of the first episode is thus devoted to spelling out a happily-ever-after romantic world between the two, fronted by a hyper-gallant Takayuki swooning over Haruka's every whim scene after scene after scene. Come its close, the blatantly sappy atmosphere made me painfully aware that the OVA was, in fact, a spinoff, and I prepped myself for an over-zealous bombardment of typicality and clichés.

Unfortunately, in the midst of dodging to the left, Next Season caught me squarely in the jaw with a right hook. Not any ordinary right hook, mind you, but one full of pseudo-melodrama and - God help me - flashbacks. And not just one or two flashbacks, but somewhere about fifty-percent of the OVA's airtime. While not all trivial, most (such as the entire second episode) never managed to be more than recapped fluff, and bogged down what should have been an hour of OVA into two. Instead of being entertained I found myself rather bored, as most of the revisited content focused on painfully memorable events; eleven episodes of Takayuki sulking in endless depression is rather hard to forget, after all.

And, as if the flashbacks weren't bad enough, the aforementioned take on melodrama puts a stake in the OVA's grave. Next Season attempts to front its events with a dramatic twist much along the lines of Haruka's accident, but ends up providing no substantive backing to make any of the excessive angst believable. By the time the terribly predictable and lame ending slaked around I was impatiently tapping my fingers on my desk, as the OVA seems annoyingly forced and contrived. Simply put, the drama is artificiality at its finest, and exudes an air of uninspired and droll levity.

Alas, I can recall a time when stellar aesthetics made OVA's worthwhile of their own merit, but such days are long gone. While Next Season looks superficially appealing, it holds little sway against its non-OVA peers, as crisp coloration and fluid animation are now industry standards. All in all, it meets a satisfactory quota in quality, but does little more than attempt to dress up mediocrity with a pretty face.

Again, Next Season fronts completely standard audible fare. Decent voice acting and a sufficient soundtrack round out the score, but none of its qualities merit attention aside from a couple catchy title tracks. Such blandness has been done before, will be done again, and that's that.

While Haruka and Mitsuki change little from the main series, Takayuki is reduced to a mindless Haruka-bot. In addition, his emotional instability all but disappears, and he flaunts a blank, empty smile all the way through. Were he simply bland I would not really have cared, but his dialogue ends up trite and trivial, as he repeats the same lines incessantly through all four episodes and shows no stimuli to occurrences around him. In spite of his utter alienation with reality, all the drama around him works itself out without his involvement, which results in him having little purpose other than to be the swooned-over male; had he been replaced by a brick I don't think much would have changed.

Ultimately, Next Season amounts to little more than a poor rehashing of old faces with a new look. The rendition teems with mediocrity and, while fit for dedicated fans of the series, speaks poorly to those who enjoyed Kimi ga Nozomu Eien at face value. While never truly steeping into the realm of bad, were it not branded on an already well-established title it would have no redeeming value of its own, and thus should be approached with careful consideration.

Can the already amazing Kimi Ga Nozomu Eiein get any better? I'll say this now, on its own, this OVA isn't worth it. But in addition, to the main series, it enhances the story and is a must watch. Not necessarily because it's good, but it gives the viewer more to think about. This provides an alternate (true?) ending to Kimi Ga Nozomu Eien, which already had a decent, if somewhat unexpected ending. Takayuki chooses Haruka over Mitsuki. To all who loved the original, I recommend watching this. There will be spoilers in this review, as I will assume everyone has watched the original. Which is a must in the case of this OVA.

The animation is improved vastly, they even have a few interesting shots. They even redo some scenes of the original series in the new improved style. The ecchi, is further reduced from what little there was, a good point in my book. The sound remains the same, the music is great, but not good enough to make me want to get a sound track. This is in Japanese, but I assume there might be an English audio version out there somewhere?

As for the characters, they get improved by this addition. In particular, you find out that Haruka is concerned about worrying Takayuki too much and she is scared of cars for obvious reasons. After getting out of the hospital, she is studying for university entrance exams, alongside her sister Akane. Takayuki himself, makes me conflicted, due to how he takes the event at the end of episode 1, during the following episodes. Any doubts I had about Mitsuki are erased as she explains her actions, thoughts and feelings. I minor improvement over what was already set up in the original series. There seems to be a bit more about Akane and pleasantly less of Ayu Daikuuji. Also, thanks to Haruka's mother for the advice.

Storywise, its all a bit iffy, but essentially episode 14 of the original series never happened. The story is mostly faithful, but there are a few minor contadictions, such as the scene of Takayuki being told by the parents, not to visit and then he visits the hospital by standing outside and staring at the window. The break up between him and Mitsuki is different, more blunt and to the point. They explain the year following the accident a bit more, despite a few details being different. As great as things look, the actual relationship gets a bit tense and vague in its existence. There's references to events in the original series, by similar events that occur. Its a bit emotional, during the first couple of episodes and there's even an unexpected shocking moment, that could make or break this OVA. The ending was somewhat unexpected? But good nonetheless. There's some social commentary/subtext to take away from this, juggling a full-on relationship with life is hard. A quote from this anime: "To gain something, you must sacrifice something else." Possibly the truest words said in this OVA.

Overall, even if this isn't as great as the original, it's worth watching so that, you, the viewer, can make up your own mind about the whole thing. It's like playing though 2 different endings in a game and then choosing to accept the one you like best. I'm not so sure why people don't appreciate the existence of this OVA. Often with great anime, you wish there was more and this is sort of what you get here. Just watch it. I personally, was all over the place with my opinion on this one, but the ending fixed all that.

After watching Kiminozo and finding it INCREDIBLY powerful and moving, i have to say this second season isn't really worth the time. It does a LOT of heavy retconning that is a bit of a slap in the face to the original work.

After the second episode, i was already to quit it entirely, and haven't yet watched the other 2. If those somehow manage to miraculously save this OVA i'll post it, but right now, i'm disappointed i even started it.