Alt titles: Kimiaru, They Are My Noble Masters 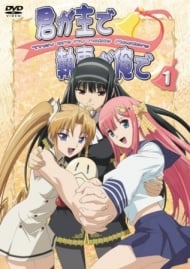 Ren and Mihato Uesugi have moved to Chiharu in order to find work and a place to live, but it has proven difficult to find employment. Through a series of events the duo finds itself in the prestigious Kuonji house - and subsequently accepts live-in maid positions! Famous Shinra, inventive Miyu and youngest Yume are tough customers to wait on, but with the help of the ex-militant head-butler Colonel, head maid Benisu and other wait staff, Ren and Mihato might just learn what it takes to be the best maid or butler you can be. Their jobs are not easy, though, with everything from inappropriate sibling love to household games to handle!

Well kinda dissapointed, it started slowly and then got a little better. But it was boring, not the type of harem in my taste but i like the charachters. sure i would want to see a second season would've probably been better since they developed good. it's kinda old but a remake of the older animes would be nice.

Greetings fellow anime viewers(and people bored enough to read another review by me) its RandomRedneck with a review of another show. This time, i give my thoughts on a show that reeked of average to me. That show is called, "They are my noble masters." And trust me, no one is really all that noble in this show. Let us begin shall we?   STORY The story goes as such. Ren, and his highly annoying sister Mihato have run away to the city to escape an abusive father. As you can guess, two teenagers running away from home are gonna have issues. Money and jobs being the biggest. And, conveniently, a girl just happens to pass out on the street near them. That girl is named Miyo, she's rich, invites them to her home, yadda yadda yadda, they get hired by her older sister Shinra as a butler and a maid. From there you get a typical harem-ish anime plot.   ANIMATION   Its alright actually. Nothing award winning, but it works.  What annoyed me was the background characters. They are just drawn as orange and green paper cut out looking things.   SOUND   Highly unimpressed here. The ending and opening are both like taking a cheese grater to your ear drums, and Shinra's classical nonsense isn't gonna wow you.   CHARACTERS   And here is where Redneck gets annoyed. This show has two passable characters. Ren and Natose, that awesome chick with the eye patch. The others? Your typical assortment of anime characters types. You have the ojou(Shinra) the smart one(Miyu) the "please notice me" youngest sibling(Yume) the tsundere(Benisu) and the "For the love of god, shoot this bitch"(Agahe). A particular annoyance, is during a scene near the end, where these super powered chicks fall prey to that old chestnut, "The standard female grab area".   OVERALL Average, unimpressive, hard to stomach characters, and an ear rape of a opening and ending theme.  If you like those, check out "They are my noble masters". If not, you best steer clear. Thank you.   Yours truly,   RandomRedneck 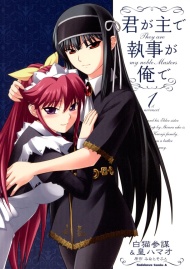