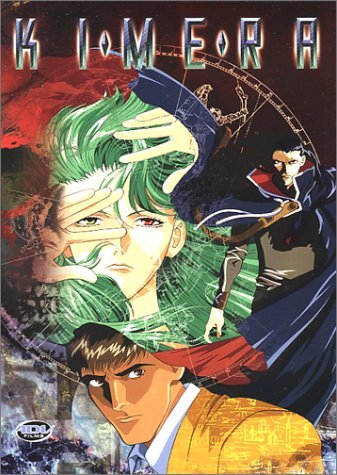 Automatically this starts out with some lovely early 90's gore clearly influenced by the 80's still. yay random tenticals! I can see where this is going already! The best part though is that it seems to be a male cast so far so there's bound to be some smoochin ;) A few minutes later i am rewarded with tube kissing? o.O That's right one of the male leads is in a science place and sees a test tube person and gets the overwhelming need to kiss it. i can only assume the monster inside has some lovely telepathic powers.

The ridiclious dubbing has given me such great sentances so far.

"ohhh grow some hair on your balls"

"this is getting to be a pain in the ass... this is worse than my hemroids"

"if no males are present she can impregnate others"

The animation or music is nothing special either and pretty much unnoticable. Actually scratch that about the music not being noticable.... how can you not notice weird violin, bongo music during a VERY intence battle to save the earth?

So finally Osamu (the male lead) gets his test tube person out and proceeds to make out with it.... AWESOME nothing says hello like kissing. His friend at this point is stuck watching them do this. There is so much awkward "sexual" scenes in this it is quite hilarious. Soon after she escapes and goes for a night out on the town. getting picked up by 2 unsuspecting males. her manish looks doesn't seem to bother them at all. and she's still hot dispite her lack of boobs. XD and this is where her blood thirst vampirism comes out. sucking them dry while humming to herself.... yeahhhhhhh okkkkk.

Meanwhile Osamu is seeing stuff that she had done in her past and is being tormented by it. cause well i mean who wouldn't be a little disturbed seeing someones past that you don't really want to. Oh yeah i forgot to meantion that all the mosters are from SPACE. so they are SPACE VAMPIRES! Space vampires that will eventually destroy the earth because Kimera holds the key to that in her offspring.... OKKKKKKKK

So eventually this boils down to if Osamu can kill Kimera or not to save the earth. Well all i will say is watch and find out. it's highly entertaining expecially if you love old sci-fi horrors like i do.