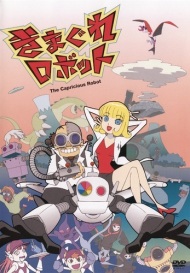 StoryFrom the minds of Studio 4C comes Kimagure Robot, a set of 10 shorts that show us a variety of misadventures involving... robots! There is no plot to be found, for the most part. The only thing that links the episodes is the existence of the Doctor (who creates the robots), and his Hakase Company. Though each episode doesn’t show us the Doctor, they do show us a situation that his robots have been involved in, reminding us that no invention is perfect, to say the least. These short tales involve things like a robot defending the planet (from another robot, of course), a genie robot who grants three wishes (that aren’t always what they seem, in typical genie fashion), and even a robot pretending to be a human, that urinates! Each whimsical story is full of light hearted humor and fun, without being too random and useless. In a way, the storylines reminded me of something like Pet Shop of Horrors, but far less dark and sinister. The Doctor was almost like Count D in a way, inventing creations that are interesting but also potentially dangerous. Again, these are all presented in a light hearted and humorous way, so there really isn’t much to dislike about the series. The only people that might dislike the "plot" of Kimagure Robot are those who either don’t like robots, or need a solid plot. Folks expecting the trademark Studio 4C randomness (to be found in such things as Eternal Family, Digital Juice, or Professor Dan Petory’s Blues) will be somewhat disappointed, since the "random" elements of Kimagure Robot are mild at best. I really enjoyed this set of shorts. The stories were all entertaining and short (if you are stretched on time), and contained a cute moral at the end to wrap things up. A big thumbs up for the "story", in my book. AnimationI’ll admit, I might be a bit biased towards Studio 4C’s animation, since I tend to love their trademark style. As with other shorts from the studio, a variety of styles can be found, ranging from deep, vibrantly colored shots to very faint pastel shots that have barely any outline around the characters. I definitely appreciated the dark and beautiful shots a lot more, but the faint shots still had their place in making the tone whimsical and light. On the other hand, unlike many shorts from the studio, not a lot of 3D animation can be found interspersed between scenes. Then again, I appreciated the cel-shaded 3D effects much better, in this case. For example, in episode 1, we see a very interesting shot of the Doctor (from above) next to a robot, followed by an immediate 180 degree pan to a client, followed immediately by another 180 degree pan back to the Doctor. It’s little details like this that make Studio 4C animation always such a treat to watch. I also really enjoyed the designs of the robots, as there were quite a few and each one looked very different. Though some appear stereotypically robotic, others had more subtle and quirky features that made them likeable in every way. I also was a big fan of the hilarious expressions on the robots’ faces, making them appear jovial and happy, even as simple machines. Even the simplest robot (a flying bird) was given a hilarious addition: bright red eyes when it detected a fire. Combined with a wacky appearance in general, these red eyes gave it a hilarious demonic look at times. In addition to the robots, the Doctor’s design is perfect for a mad scientist. All in all, a brilliant range of colors, wonderful mix of styles, great character designs and a plethora of interesting camera angles and shots. Great animation all around. SoundEach short in this series is lighthearted and thus, the music follows suit. The tunes are mostly light synthesizer bits with lots of quirky noises I’d expect to hear in Katamari Damacy, fitting perfectly with the mood in each episode. For something like this, the music shouldn’t be the focus, it should compliment the visuals... and in this case, it gloriously succeeded. Anyone watching Kimagure Robot should walk away feeling amused, and the music definitely helps. Robots have, well, robotic voices, and the Doctor’s voice actor did a great job. CharactersIt’s hard to rate a characters section if there isn’t a good amount of plot to be found. Thus, if something like Kimagure Robot rolls around, I try to judge this section instead on the variety of characters and if their types amused me or not. In this case, the series succeeded on both accounts. A wide variety of robots is shown to us, each one having their own quirks and random personality traits. The Doctor shines as a mad scientist, making us feel sorry for him in a way, since his creations always seem to malfunction! Even secondary characters like the invading aliens make for a good cast, and help bulk up the "story" with amusement. OverallI really enjoyed Kimagure Robot, more so than other Studio 4C titles (and I’m a Studio 4C junkie, if that says anything). I admit that it won’t be for everyone, but for those who can appreciate lighthearted shorts (or like Studio 4C in general, or like robots), this should make for an amusing and quick watch that shouldn’t be missed. The animation is great, the characters are varied, the music is quirky and the storylines are humorous. What are you waiting for?