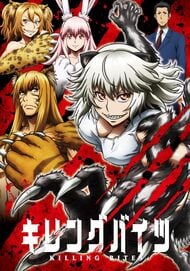 Why would you read a review of Killing Bites? Just look at the cover. Look at the synopsis. You'll know if you're interested or not by these two things. Do you want an anthro fan service show with absurd action? No? Go away then. This show had one goal, to be the anthro action show. It assumes that you want to watch insane fighting with muscly anthro characters and nothing more. Good plot points or characters are irrelevant to its goal to be a high octane action anthro fan service. There’s 3 episodes of establishing the world, most of which are to just establish tensions between some characters thru smaller fights, and then 9 episode of nonstop fighting in a 4 teams of 3 death match. There’s flashbacks in the last couple episodes that never occurred in the first 3 because the inclusion of them would’ve just slowed the action down. There’s a whole character (Oshie) who only exists in an after show segment “Guide them, Oshie!” because again, including her would’ve gotten in the way of the action. There’s an attempt to make the show seem more grandiose and complex thru the use of 4 shady Zaibatsu, but the politics is more just used as an excuse for fighting and is never given enough setup to feel like a complex maneuver. But again if you just want to watch some action it has enough tone to feel accomplished that it is enjoyable. Characters will dip into their tragic backstories occasionally, usually before a defeat or a narrator will sometimes explain how a character’s actions are in line with their fursona to make the fight seem more intense. It’s fine, but a rather lazy way to inject emotion into a scene by not being backed in any sort of larger context. But if you’re just interested in watching an anthro fan service action show, who cares? tl;dr this show is exactly what you think it is, do what you will with that information.

*spoiler-free review* The one with the most useless review wins. Killing Bites is a sports anime. I know, I know, you're thinking, "Wait, whoever you are, there's no sports tag on this anime! This is incredibly misleading!" Well it is so just sh just shut up for a second? This is a sports anime, because it's full of characters who are playing a game, whose goal is to make you like them the least. Whoever is the least liked character wins, and it's like a tournament of bullshit. There are winners and losers. There are teams. There's strategy. Everything is carefully planned out to disgust you. No but in all seriousness this is one anime that makes me wonder if there are people that also want to dig out their own eyes with a rusty spoon but have no rusty spoon so just marshall their talents towards making things that make other people want to dig out their eyes with anything they can get their hands on. That's what killing bites is. It's also anime furry girls. In typical battle royale fasion, killing bites posts a bunch of random things around like pieces on a dyslexic checkerboard, and hits them together like plastic toys with absolutely no finesse or thought put into it until literally the last episode, where it immediately fucks it up again. The story has no real reason for you to care about it. Our "protagonist" is a "therianthrope" who's based on a honey badger, and wants to win the Killing Bites, a competition of therienthropes who have to defeat each other because... Actually it was never clear. It's some kind of dumb tradition. And you instantly recall the honey badger meme. Just watch that, don't watch this. What happens in the story doesn't matter and has no meaning on future events, because it just leaves it more "Open-ended" for a sequel even if you do see it again. Every battle is short and dull until it gets to the one or two that matter in the last 4 episodes, and when those happen, boy do they look like utter garbage. The CGI is awful, the other action is poorly directed, and EVERYTHING that happens is a deus ex machina. The battles end the same, with MC beating the enemy in one or two strikes and saying her super catchy catchphrase. I hate the MC, but that's OK because I hate all the rest of the characters too. They try to put expressions on their faces and emotions and backstories and all to disguise the fact that they're all just garbage people. So many of them are useless and contribute a lot to the anime's feeling of pointlessness, especially Badger's guy who "sponsors" her, who starts the show off driving a gang of rapists' truck. The animation is garbage besides the CGI. The character designs are awful, everything is designed to appeal to the LCD of the anime community, so even though they turn into animals, the girls don't turn their "sexy" parts into animal parts because obvious. It's a huge sacrifice for fanservice. Does it pay off? No. They look stupid. Even stupider are the male character designs, somehow. The top heavy lion, the Gorilla thats literally 70% arm and 30% glasses, and the snake rapist with the extremely detailed two-pronged dick. Yeah you heard me right. The only interesting character is the pangolin guy, Kido, who's so badass he crushes skulls with one hand and brushes off claws, but he ends up with the most retarded backstory and a final fight that would make a 1 year old scratch their head and go "Wait..." It does leave it open for a sequel, too. It's so convinced people will want more, it even shows you the characters for the next one at the end instead of showing you stuff that means anything to the previous plot. It's one big bullshitfest that you should probably try to avoid. The fights aren't even fun, and the fanservice is even less. This isn't a guilty pleasure, it's just guilt.

Trashy fan service show, get used to hearing "The one with sharper fangs wins, that is Killing Bites" All the budget went to the graphic department, the show is without meaningful substance, normal actions of the Brutes are named like special moves. Overall an average show, but ending was pretty dumb. (The following is literally how the show wraps up, every other character and plot point is disgarded) ~ No real conlusion, bunny wins (was obvious) - skip 2 weeks, Hitomi kills Yuuya (also obvious) - skip 2 years, civilians have now started to become beast-people, introduce 2 new fighters and 'gasp' Yuuya is still alive! (also...) What a twist indeed... Story: Plenty of scenes and character developement happen off screen (like how Eruza taught Hitomi how to control her transformation). The gamification of the Destroyal tournament is meaningless and most of the time the Brutes just move how they want and fight who they want. Animation is good, beast-people body proportions are a joke, CG looks... funky? Not bad, but definitely distracting. Sound is good I guess, like there's nothing to complain about. Characters: Considering Hitomis personality, her actions make no sense in the 1st episode, of course she is in love with her father figure. Of coure Yuuya is a useless wimp. Most of the characters are full of them selves, bad people and they often behave differently than what their personality would indicate. As a bonus I will now list the "hooks" this show employs to try to garner an audience: Episode 1 - Uncensored nipple of a woman Episode 2 - Eruza steals Hitomis panties, she might be gay Episode 3 - Hitomi and Eruza cosplay, Akemi has lesbian sex with her sister Episode 4 - A violated woman is shown after the fact Episode 5 - Hitomi gets punch tortured Episode 6 - Forked snake pen*s (gets cut off) Episode 7 - Hitomi and Eruza have some lesbian fun Episode 8 - Ui wets herself Episode 9 - Ui is in heat Episode 10 - Hitomi powers up (she's also a born beast-person, the only one) Episode 11 - Hitomi loses an arm, obvious win by Ui. Episode 12 - Tongue bondage on Ui, Yuugo (lion dude) rap*s Yoko in front of her dead grandfather, whom Yuugo just killed. 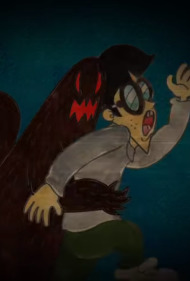 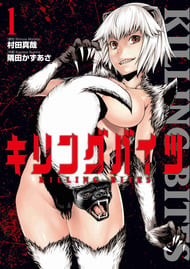