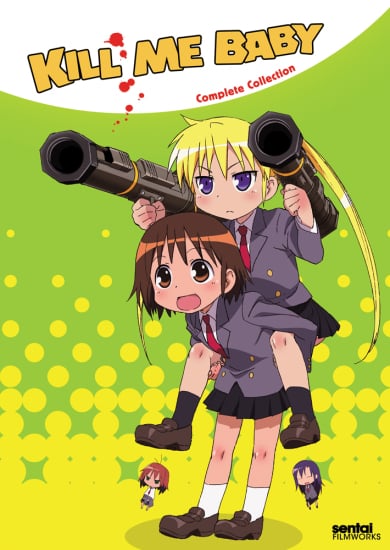 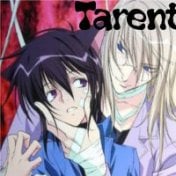 This is tricky with an anime like this.  The main story if you really stretch to find it is a story of a high school assassin and her friend who is trying to make her stop.  But this story doesn't really show up often.  Kill me baby is full of slapstick and random moments, following the likes of Nichijou and Azumanga Daiou.  It can throw off those who who are looking for a cohesive story.

Final verdict on the story.  If you like the slapstick and random slice of life style.  You will love this.  If you think it's just pandering to those with ADD and is stupid.  Then stay away.

The animation here is cheap.  But it's a thirteen episode slapstick comedy about a highschool assassin, so you can't really expect much.  It does it's job in the end. each character that is important has their own distinct design.

Speaking of designs.  The main cast of characters have a very loli design even with being high school students.  And with this choice I think it really sets up the tone of the entire series from the first sight of the girls.  That will push some away, but I'm sure there are alot of people who enjoy that style.

The opening theme is fun, the first two times listening to it.  It is sung by the voice actors themselves and is really hectic.  After the third time you'll find yourself wanting to skip it. The ending is much more tollerable.  It's still a bit annoying, but the funny ending credits dance makes up for it.

The voice acting is solid.  Each characters respective voice actor gives them a nice character.  Tanura Mutsumi does a great job giving the high school assassin Sonya and shounen style voice.  It is odd seeing a loli style character with pigtails, then hearing a shounen voice come from her.

I love the characters.  Sonya the assassin is violent yet a scaredy cat.  Yasuna is dense but lovable.  And Agiri has that odd soft voice, but she's really a con artist.  The characters really keep you watching because they are funny.  Yes it's stupid humor, but you chuckle and you keep watching to see what they will do next.

Overall the story is non existant until the end, the animation is par at best, but the voice acting and characters really carry this anime.  The fact is if you like these type of animes, you are going to enjoy this one.  If you don't, then you should probably stray away from it.

I for one, loved it.  I found it hillarious.  It had be crying with laughter in a few parts, and that is always good in my opinion.

This is one of those series that any comedy fan must watch. It's one that'll be much appreciated and loved. Altough it posesses no overall story plot, it manages to keep up a good face. watching through this series, there was not a moment of it that I didn't enjoy and I found myself laughing to the very end. The only downside is, I couldn't bring myself to watch them one after each other, since.... well... on one side I was really worried about laughing too much, and on the other hand, the lack of a plot could easily be felt. Considering all these things, your time won't be wasted if you even have a small understanding of humor. :)

When I started on this anime I had no idea what I was about to embark on.

At first I accually thought that the drawing style was from a little pre-story event....

But those crazy thoughts quickly got replaced with laughter and lolz.

I have to say: 'What a terrible story!'

But luckely for me I love random Animes wich gave me the edge to get started on this horrid story.

So it's about 2 high school girls, one is an idiot and the other an assasin and the plot every episode is basically that the idiot gets a crazy idea and that the assasin starts to hate, but after a few fists to the face (and palms to my face) she starts to get along with it.

I showed the opening to my friends (Wich is better animated then the series itself) and they proclaimed me for an idiot. Then I showed the ending (with that creepy dance) and they walked away. I still get sighs if I talk about this serie.

Well the opening song is terrible, the people yelling 'Baby, Please Kill Me!' At the commercials gave me nightmares and don't get me started about the ending (Well, that song was awesome, but with a creepy animation)

The rest of the sound effect were not even bothering.

--- Yasuna ORIBE: That idiot I've mentioned before, and yes... She really is an idiot.

Knowing her best friend is an assasin she still repeadetly grabs Sonya from behind and almost get's killed.

it doesn't matter is she is Making Shaved ice at school (forgot the ice); Eating 50 popsicles just to get a free one; Falling out of trees; get's hit in the face (Thank you Sonya and many, many idiotic objects) or just get's silly, acting old, or cries she still........ Forgot my point, she is just an idiot.

--- Sonya (No surname): That awesome assasin

Has a LOT of knives, lives on her own, get's mad at everything, but secretly loves Yasuna and her wierd adventures.

She get's attacked by other assasins throughout the series but always wins easily, if Yasuna just wasn't there.

Her only weak point is a paralizing fear of animals, even lizards or puppies.

I love her for acting like she hates everyone, but secretely enjoying and particepating with everything.

Whenever they explain anyrhing about her tricks they are cheap ones. But if they don't explain it she's epic, hanging on cielings, teleport, body doubbles.

Epic chick that shows up whenever she wants, Love it!

--- Unused Character: Random as can be!

Red haired girl that just wants a role in the show, but never get's her chance

Love her moments of retardness

Love it, Hate it, Too Random, That's so funny... These are all reaction i've experienced with this show.

That's why I can honestly say: This is a real guilty pleasure for everyone older than 6 years and 3 months, but if you like random, and I maen random random, You can love this anime despite all it's flaws.

Have Fun With Your Life, Your Animanga And Your Friends!

I came into this anime really wanting to like it because it gave me a bunch of nostalgia. Yet the animation of this classic was poor and the characters seemed much duller. The sound is alright and the story is still pretty well. Yet it is more of something to keep on in the background than to actually watch because I was excited to see these characters which I had come to enjoy over the years jump to life on the screen. Yet it feels more like a picture slideshow. This anime very well could have been a passion project yet it feels more like a cash grab based on the success of the novels.

Kill me baby, the review.

When I started watching Kill me baby, I didn’t really know what to expect. Sure, I read it featured assassins and ninja’s, fit into some random high school playground, but that was about it. The opening was horrible, so after the first watching, I skipped that altogether. On with the stor--- Oh wait.. It seems everyone forgot to actually hire anyone to write any kind of story? No worries! We’ll just do a lucky star rip-of.  What could go wrong?

Well, other than the fact that I like my stories and that the concept has been done to death (take a few random high-school students with distinct personalities, throw a few random events at them, make their reactions over the top so no-one can relate to them but everyone enjoys them ???? profit).

On the point of distinct personalities: There are only 3 (4 if you count the redhead which shows up in only 2 episodes, 1 minute each). Azumangah dajoh and lucky star both thrive on the different personalities and the interactions between them. If you take away the quantity of personalities (and, to be fair, the quality as well), the series is bound to get less interesting.

So, we have no story, uninteresting characters and a mediocre animation style (whoops, guess that’s another point down the drain). What does this series have going for itself? Well, if you look at the back-to-back comedy style of the series, it’s actually quite good. I guess you could call it one of the  (only) redeeming factors of the series. So if the comedy is good, why am I bashing this series with a broken club filled adorned with needles? I guess because I was expecting a bad lucky star rip-off, I was watching as if the series was a bad lucky star rip-off. But it really tries to do something else completely. The series isn’t top of the notch, but it’s enjoyable to watch.

Oh, the opening is truly horrendous by the way.. Skip it.