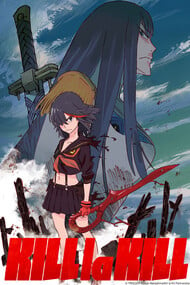 Ill (try to) keep this short... To describe Kill la Kill into 3 words: ''over the top''5 seconds into the show it goes full throttle an it rarely takes it food of the gas. Over the top action, over the top comedy, over the top (stereotype) characters. Unfortunately also over the top (semi) nudity. But still over the top entertainment. PlotGirl (Ryuuko) has recently lost her father and is searching for the killer for revenge and answers. During her search she stumbles upon a town where the school student council president (Satsuki) is the absolute ruler. The performances of the students determines how high the social status of their family is. The higher the status the more privileges and power. (Parody on society)Satsuki seems to know about her father so Ryuuko tries to question her about it but is forced to fight the several school clubs first before Satsuki will reveal what she knows. StoryNot much to add, a girl fighting for her revenge but there are some plot twists which are somewhat cliché but they aren't easily predicted. AnimationThe biggest issue, the animation is not that good. Took me a while to get used to but there were still several moments where the animation seemed to get noticeably worse. Not only the background but the character animations as well. There however were some comic style scenes (line art) which were refreshing and nice to see.Another big issue in the animation was the fan service. The show contains a butt load *bad pun* of (nearly) naked people. This is not a problem for the secondary characters such as the Nudist Beach organization where it is comical but the main characters would be better off with less revealing outfits and surely with a lot less transformation scenes. And do not forget the mother who seems to has an obsession for incest? ''Fan service''   (Comic / line art syle) SoundThe music was very good with a wide range of genres. Usually the background music isnt noticeable or something to remember but the show had many moments where the music jumped out. Especially the characters theme songs are great. CharactersWith one or two exceptions there were no complaints about the characters Ryuuko is a strong main lead character. Satsuki the coldblooded enemy/rival. And several very stereotypical characters such as *hallelujah* Mako who is the main comical relief. Very incomprehensible with 0,0% brain activity but a lot funnier than the regular dimwitted comedic characters which you see in other shows. The devas and Nudist beach were great as well who keep switching from comedy towards serious. OverallMost of the points I deducted from the animation where for the fan service and a few (irregular) quality issues. Else it would of been perfect since this over the top nonstop comedy and action anime is totally my style.

With an impressive creative bloodline to draw from, Kill la Kill is visual feast for the senses. Were it a meal, it'd be shooter sandwich: a ridiculous amount of delicious ingredients crammed into a small space, squashed down to fit and then consumed with zero regrets. But is it a meal you'll want to go back and have again? Against the background of a dystopian world, Ryuuko Matoi arrives at Honnouji Academy, and her intent is made clear from the start: find and avenge her father's killer. The murder weapon is one half of a giant red scissor, and also happens to be Ryuuko's signature blade which she wields with abandon. Wasting little time, she confronts Satsuki Kiryuuin, the student council president who rules the academy with complete domination with the assistance of her devas, four fellow council members who possess considerable power thanks to their life fiber-infused uniforms. It's these mysterious life fibers that is the primary mechanic that drives KLK's storyline. As a scifi story, there's nothing that stands out in regards to how the characters battle and ultimately face off against the threat of the life fibers. It's merely a convenient base to serve the ingredients that we're all here for: over-the-top characters, imaginative visuals and fantastical action sequences. Ryuuko and Satsuki are immediately appealing and it's easy to see why. For both characters, their resolve to achieve victory is unflinching, and while they possess enormous power and fighting skill, ultimately it's their sense of determination, loyalty and sheer will power that fuels their drive to succeed. The visual design of these characters, along with the side characters, effectively matches their personalities. A significant part of their visual package is the life fiber uniforms which transforms the characters into powerhouse entities. In the case of Ryuuko and Satsuki, there's little argument that the skin-exposing transformation is less of a plot device than a simple means of appealing to the target audience of the show, namely teen and young males. Even with the excessive titillation, the uniforms provide a wonderful outlet for the show's creative team to go all out. It wouldn't be unfair to describe the characters as standard archetypes that we've all seen before. Beyond their appealing visual design, there is little that makes them stand out. The characters do develop and grow throughout the course of the series, and with friendship and loyalty a primary theme in the show, the characters play a satisfying, if somewhat straightforward role in driving the story forward. In addition to the visual design, the other stand out of the show is the action sequences. As expected of the show's production team, nothing is held back when it comes to animating the battles. It's hard to avoid using the term 'over the top', but it applies perfectly in when it comes to depicting the fantastical combat that are a hallmark of Kill la Kill. It's also in the battles scenes where the personalities of the characters really shine, their stoic will to win perfectly aligns with the stratospheric energy levels of the fighting. Kill la Kill is a lot to take in, and the pacing of the show is pedal to the metal throughout the course of the series. While almost frantic in its story telling, there is an appropriate level of efficiency in its design. I would've liked to have seen more development in the characters, but really this show is not about delivering a story that examines human complexity. It's a no-holds-barred visual feast with simple but effective characters that tie it all together. The wonderfully creative visuals and the amazingly choreographed action sequences are enough to make this series a classic. Along with copious amounts of fan service, Kill la Kill is easily digested and enjoyed. It's a meal that you'll look back on and desire more of.

Few anime deserve a 10, and I am lucky to have watched a decent number of them.  I want you to watch this anime, but I have some explaining to do so you dont drop it too early.at first you will see silly animations and an overblown opening scene.  You will think that this is a third rate anime.  It is the farthest thing from it.  Then you will see scandelous clothing and you will think that this is just a ecchi anime.  Again, very wrong.  The animation is brilliantly done to capture the humor of the anime, it has some silly moments, but then switches and goes wild when the plot gets serious.  The best comparision I can make is Tegen Toppan Gurren Lagan.  They both share this trait of using animation styles to bring either the epic nature or humorous nature out of the anime. With regard to the scandelous clothing, ITS NOT JUST THE WOMEN, to. . . . if any ladies even watch it.  The scandelous clothing is actually part of the plot. . .  believe it or not, but once you watch it you will believe me.  Furthermore plenty of characters end up getting "nekkid", so get over it.This story did things that you would never expect in an anime.  It made that silly animation style epic as hell, and it turned ecchi style clothing into an epic as hell story plot.  Dont get me wrong though the ecchi is still there. Story:  Glorious, amazing, perfect.  It builds and builds and builds, twists and turns and explodes into awesomeness.  And the ending. .. . . oh the ending.  I was worried it was going to make me super sad panda.  BUT NAY, the ending was perfect.  It was absolutely PPEEEEERRFECT.  All the more reason to love this story and this anime to death. Animation: Like I said before the anime SEEMED silly stupid and bad, but in fact it was brilliant in the way that it captured the humor of the anime.  When it wasnt capturing the humor it was capturing the absolute epicness that was Kill la Kill. Sound:  Astounding, it was beautiful and perfect for the style of the anime.  The op and end themes, the character themes ( the Grand Coturiers themes was creepy) everything was gorgeous. Characters: I loved the characters, so many unique and silly habits that the characters had.  Massively epic personas, and thanks to the story there were some huge changes and tons of character building.  This ultimately added to the awesomeness of the ending. Overall:  YOU MUST WATCH KILL LA KILL.  If you love action, if you love story-rich anime, if you love some feels, if you love epic bad guys, then you will love Kill la Kill 10/10 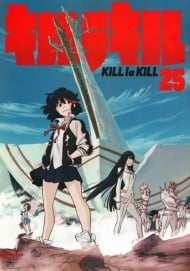 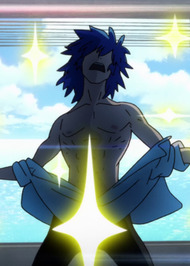 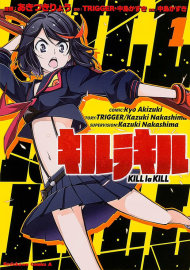