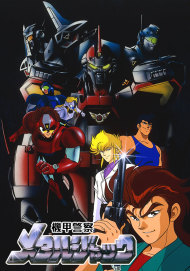 417 users are tracking this. Log in to see stats.

I decided to give this show a watch since this was Nobutoshi Canna's (Or Hayashi as his surname used to have been before changing in 2000) 1st lead role back in 1991.Story: It's a pretty episodic series about a Hotblooded Police Officer named Ken Kanzaki, who he, a Formula Racer named Ryo, and Wrestler named Go all happen to secretly be cyborgs who can JACK ON to their suits when the situation calls for it. Basically they have to look after some rich kid named Jun, who happens to have connections with the Bioroids that be causing trouble in pretty much nearly every episode. It was originally meant to be 50 episodes but was cut down to 37 due to low ratings, probably because it was too episodic for it's own good to keep long term interest. And while the story itself isn't bad by any means, it isn't anything great either.Character: I found the cast to be pretty stock to leave much of an impression, but they are harmless. I did however enjoyed Ken Kanzaki as a lead to watch, and his interactions with his sister are genuinely a sibling relationship that fortunately isn't fetishized like most sibling relationships are depicted nowadays for whatever reason. Though I did found his sister Sayuri to be pretty obnoxious at times, especially with her "ONII-CHAN!!!" spammage, not to mention the moments where she would try to stop Ken from using his gun to fight back and protect civilians I cheered when he backhand slaps her in the face. Though her crush on Jun is rather sweet. Ryo and Go do get their limelight episodes here and there, though they are pretty predictable, and they just feel kinda there in the long run, They eventually introduced a brooding anti-hero with dark backstory named Shadow later in the show and he's an ok addition. And then there is Jun, the standard child genius character with a mysterious background, pretty much the only other character I was genuinely interested in beside Ken and his character arc holds up fine.Animation: It's pretty early 90's, but it holds up pretty well for the most part. There are a few blink and you can miss offmodel moments here and there, but it's pretty serviceable for a 1991 production.Sound: Pretty 90's as you can get, but pretty enjoyable. The Opening and Ending Themes "Just Dream On" and "Hold On" are pretty classic.Voice Acting: Nobutoshi Hayashi/Canna was the reason I even gave this a watch, and his performance as Ken holds up pretty good, Probably helps that he has been acting since the age of 3 and it didn't take long for him to adapt to voiceover when he accidently ended up in Aoni Productions when he wanted to pursue an acting career. Other noteworthy performance was Kae Araki as Sayuri, and that is probably because it's literally her voice for Miaka from Fushigi Yuugi, who Canna would end up voicing Tasuki in that series, where Tasuki and Miaka had a similar but more complicated type of relationship. Other seiyuus to be found include Daiki Nakamura as Ryo, Ken Yamaguchi as Go, Yu Shimaka as Shadow, Mari Maruta as Jun, and Sho Hayami as Toridai. The overall voice acting quality is decent, though can get rather corny here and there.Conclusion:Armored Police Metal Jack is a pretty alright series, even if does falls flat due to it's overall episodicness, even if it concludes itself just alright. I'd say it's only a worth a watch if your a big Canna fan or if your in a mood for some 90's cheese.