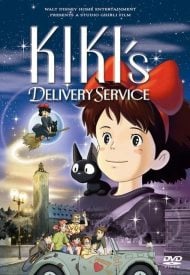 StoryKiki’s Delivery Service is, first and foremost, a children’s film. From the eighties. Also it’s a coming-of-age story, and unless those are done reeeeeeeally well, they can induce a hard-core snooze-fest. But hot damn, it eschewed all these possible pitfalls, and became one of the only Miyazaki films I actively like. The film pulls off its slice-of-life portions stunningly, to the point where it becomes easy to overlook all the happy coincidences that Kiki runs into. Every instance of "no, there aren't any witches living here, so why don't you!" or "well, honey, you can live in my house for FREE!" receive a free pass since the young witch's trials of adjusting to her new life, financial difficulties, and making it (sort of) on her own for the first time are so engaging. I just sat there with this big silly grin on my face because somehow all the boring things this boring girl did felt fresh and deserving of viewers' full attention. Everything moves along spiffily until the contrived conflict arrives out of the blue. It substantially detracts from the film’s value by introducing threads that are completely unnecessary and jarringly incongruent from the established pace. When Kiki’s [SPOILERSPOILERSPOILER], I couldn’t help but lose interest and think that, yeah, I’ve seen that all before, booooooring. Sure, the movie’s a bit aged, but that climax (and it’s resolution, which was similarly handled in the most cliché and over-used way possible) was nothing new in the 80s.AnimationThat town is handsome. For realsies. No wonder Kiki fell in love with it. As for the animation- Kiki’s Delivery Service is a Ghibli film. It looks like a Ghibli film. And for once, I mean that in the most sincere, complimentary way possible. The character designs are adorable, the backgrounds are über-gorgeous, and movement is consistently fluent. Studio Ghibli has this whole thing down to some sort of movie-animating science. Or witchcraft, I’ve yet to decide which. This category doesn't deserve top marks because the animation didn’t have that extra something-something that makes it stand out from everything ever made ever, but nonetheless it was incredibly solid.SoundAnother thing I like about Ghibli is the ace casting- and with that giant budget, of course they’re gonna hire the best. Additionally, in typical Disney fashion, the dub voices are all sorts of super. Only the most hardened anti-dub fanatic could find fault with it. Or one that finds Phil Hartman’s performance as Jiji abrasive. I, however, adored this casting, as it gave him this great smarmy voice that augmented his constant chiding of Kiki and absolutely everything she set her mind to. It’s like he was saying everything I was thinking, albeit in a more irritating and plot-relevant manner!CharactersQuite the mixed bag. Kiki is the standard Studio Ghibli female protagonist- vaguely spunky, eternally optimistic, and sporting youthful attractiveness and a personality virtually indistinguishable from the likes of Sophie from Howl’s Moving Castle, Totoro’s Satsuki, a potato, or any of the oodles of Ghibli leading-lady clones. Hell, even the Disney princesses have more variation (and I’m not just referring to their wardrobes, either). Making over two decades of movies with the exact same heroine is ridiculous. At the very least, please toss in some interesting character flaws (and no, Kiki’s eye roll-inducing conduct towards Tombo doesn’t count). Apart from the mains, the supporting cast included the standard “nice old lady”, “guy who looks big and scary but is actually nice”, “lady who is so nice, you wonder why she hasn’t been robbed blind yet”, and “person who is nice and has no other distinguishing characteristics”. None of them played a huge role in the narrative, so their blandness can largely be overlooked.OverallFree from the environmental themes that usually plague Miyazaki’s work, Kiki’s Delivery Service is an endearing film. Like most of the studio’s work, much of its charm is culled from nostalgia, but even the uninitiated can find plenty to enjoy. Recommended for people who enjoy calm stories and won't get hung up over insipid characterization. Those who enjoy meatier yarns may want to steer clear.

Kiki’s Delivery Service is another one of the lovable Ghibli classics and, if anything, it is a simple story done nicely. Although nothing important happens in this film, it is presented in a dynamic and cute way, so it can work just fine for the kid audience. It is quite unimpressive compared to earlier Ghibli works, such as Nausicaa of the Valley of the Wind and Laputa – Castle in the Sky but at least it is not just a walk in the park, like My Neighbour Totoro. Hayao Miyazaki beefed up a bit the excitement and now there is some actual danger and suspense in the story. It has witches, and flying, and the fear of failing, the willpower to succeed, the chance to mature and set out into the world as you grow up. Everything is presented lightly but the context is there. The basic story is about a little witch sent to live amongst normal people for a period of time, as part of her passage into witchhood. It is meant to be part of a challenge where she must prove she can live on her own and not being depended on her mother anymore. In order to do that, she of course needs to socialize with the residents and make friends to help her in the challenge. An interesting point is that this is a setting where people are living peacefully with witches and they don’t hunt them with torches and pikes as we usually expect them to do. She doesn’t have to hide her powers, which are still far from properly manifested. So the whole setting is a simple coming-of-age tale and 100% character-centered where the heroine needs to learn how to be independent, find the courage and power to tap to the magic hiding inside her. It is flavoured nicely with flying scenes, a funny talking cat, and hints of magic spells, so it will not feel dull for the average viewer. It will still feel boring if you expect action and explosions though. The directing is fine (as in all Hayao’s earlier works) and the production values are great (as in all Ghibli works) but the pacing may feel rushed at parts, especially during the resolution to Kiki’s ineffective magic. It didn’t last long enough for a proper build up and it lacked any complexity in-between to really feel like a problem. They could have done a thousand different things to flesh out the setting instead of leaving it as a fancy backdrop for a simple coming-of-age story. It could definitely need another half hour of moodiness before she finds her way. Other than that, the themes of the film are presented nicely and there are no plot holes or inconsistencies to make it feel stupid. Kiki’s fleshing-out and development, although rushed, is still very strong and memorable; plus her funny talking cat is becoming likable in a few seconds.In all, it is a fine family movie if you want to have a nice quiet evening with the kids. It never becomes exciting or unpredictable but the visuals are great, the characters are likable, and the pints of magic help to keep your interest in watching further. And now for some excused scorings. ART SECTION: 9/10 General Artwork 2/2 (well-made) Character Figures 1/2 (average) Backgrounds 2/2 (well-made) Animation 2/2 (good) Visual Effects 2/2 (magical) SOUND SECTION: 9/10 Voice Acting 3/3 (good) Music Themes 3/4 (not great but fitting with the feeling of the series) Sound Effects 3/3 (good) STORY SECTION: 7/10 Premise 2/2 (interesting) Pacing 2/2 (a bit rushed but otherwise fine) Complexity 1/2 (not much) Plausibility 1/2 (so-so) Conclusion 1/2 (cheesy) CHARACTER SECTION: 8/10 Presence 1/2 (average) Personality 2/2 (simple but well founded) Backdrop 1/2 (simplistic but it’s there) Development 2/2 (only for Kiki but there is a lot for her) Catharsis 2/2 (only for Kiki but there is a lot for her) VALUE SECTION: 7/10 Historical Value 3/3 (all-known) Rewatchability 2/3 (high as it is easy and cute) Memorability 2/4 (too basic in plot but otherwise fine) ENJOYMENT SECTION: 5/10 It barely makes use of its setting and the plot is simple but other than that, it is a cute movie for the kids. VERDICT: 7.5/10

==SPOILER FREE== Story This film follows the story of a 13 year old witch, Kiki, who leaves home to finish her training. The story follows all the typical things you'd expect to see a 13 year old do, but it does it in such a heartwarming way, and truly highlights the fact that even when others around her might not be, Kiki is a genuinely good person. Animation/Art The animation is one of the best parts of the film. It feels very Ghibli in its style, and has held up remarkably well considering at the time of this review, it's over thirty years old. The setting is generically European in influence, and you can see this in the art used very well. It's truly an excellent setting. Sound As in any Ghibli, the music is stellar. It serves to heighten and intensify the emotions felt by the characters, and as always, conveys these to the viewer in a logical and compassionate way. Characters The characters are excellent. Kiki still has her youthful exuberance, and the other characters you meet in the film all showcase aspects of humanity that are easily recognisable. You'll see people you know in the characters, and that will help make the experience all the richer. Summary A great film that's stood the test of time exceptionally well. Highly recommended. 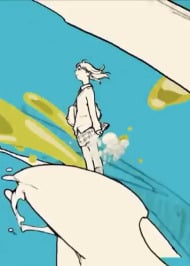 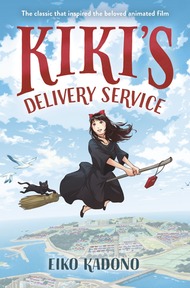 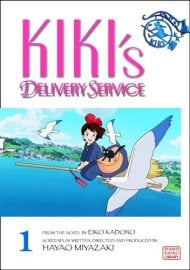