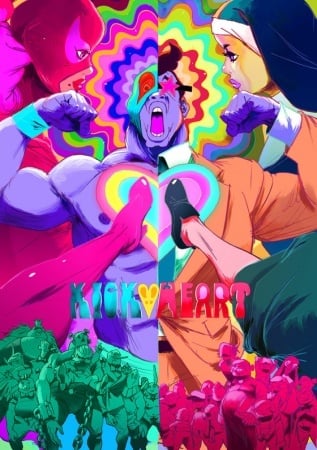 Japan can come up with some weird and wonderful things. This is a country where people can pre-order their Christmas dinner months in advance from KFC, have hotels with rooms that are slightly larger than coffins, and have mascots for literally everything, such as bottled water, train lines, and even prisons. And it's not like the west doesn't have it's fair share of weirdness either, just take a look at wrestling. Throughout the history of wrestling, there have been wrestlers such as Doink the Clown, Xanta Claus, who is an evil Santa Claus, and Perry Saturn, a man who fell in love with a mop that had a face on it. So naturally there would be some crossover. A demonstration of this is Kick-Heart.

Kick-heart came out in 2013 and is a short film produced by Production I.G. It was fully funded on Kickstarter and was the first anime to be fully funded by crowdfunding and open up the doors to many other anime projects. I was screened at several festivals and first aired on television on Toonami.

The short film has some pretty good talent behind it. The director is Masaaki Yuasa, the person who created Mind Game (2005) , Kemonozume (2006), Kaiba (2008), and Tatami Galaxy (2010), and he went on to direct Ping Pong (2014) shortly after this. So there is a reason to be interested in seeing this short.

It's a love story between two people that have a secret to hide, one a pro-wrestler and the other a nun. There isn't much of a story to Kick-Heart beyond it's initial premise since it's about 12 minutes long, and i don't want to spoil much of it so you can see it for yourself. It really doesn't need to be more complicated than it is.

The short brings you in with it's animation style, and thankfully, it has plenty of style. It shows off it's animation talents proudly. It's animation is fast and energetic, and suits the concept very well.

Unsurprisingly, this has a cult following. Surprisingly though, it got an English fandub while the fans were waiting for the official English dub to get released. Whether it's worth listening to is up to you, but i imagine if you like something on the weirder side like Kick-Heart, the fandub might up your alley.

Kick-Heart is worth checking out for those who like the unusual side of anime that comes out of Japan. It definitely has a great weird energy to it and a unique style, but it's not for everyone, so you have been warned.. It's only 12 minutes, so you can watch it on your lunch break or if you're waiting for something and you need to pass the time.