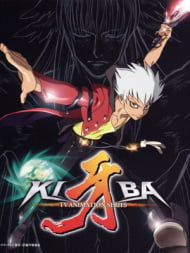 Have you ever been sick and tired of the world we live in? So much, that you've tried any means possible to escape it? Zed shares the same feelings as we all do. In the smog ridden, and sunless world of Calm, people manage to scrape by on the bare minimum. Fed up with living in this hellhole, Zed looks for an outlet to another world. Beating down and smashing every door in his sight, he hopes that if he believes strong enough, his gateway will open -- open to a place beyond his imagination, and where his life will have meaning. After finally being transported to another world full of nature and endless battles, Zed soon comes to realize that his life of purpose has just begun.

StoryIn my earlier anime watching days, a lot of shows that didn’t instantly seduce me were reduced to stalled purely because of my flippant nature and lack of staying power. A few years later, I have decided to revisit some of these mediocre series in the hope of finding a gem. Next to check off the list is Kiba, a fantasy anime that had remained on my stalled for four years. One of the first shows I ever watched (and bought, for that matter) was the deceptively dark Escaflowne. Chock full of violent action, the surface of Kiba exudes the same intriguing aura of a fantasy anime but lacks the balls to show any real brutality. Both start with a kid transported into a strange world and forced to battle against other-worldly humans, but the similarity between the two soon ends; Kiba quickly settles into a more family-friendly rut and a real lack of kick-ass-ness aspires to be nothing more. A potentially more mature aspect of the show is the political intrigue, something that swiftly becomes less like the well thought out Twelve Kingdoms and more akin to a care-free Yu-gi-oh. Sadly, pacing is a real issue in this show; numerous plotlines are crammed into the already sinking story and the writers scrabble desperately to keep the whole thing moving. As the action jumps around the various cities in the new world, life continues for other characters and the viewer is left feeling like they’re missing out on something important. The speed in which Kiba flits from location to location makes the head spin, and it often feels like something is ultimately missing. Probably a cohesive plot. During the midpoint, a large competitive Joust becomes reminiscent of a proxy battle show, such as Pokemon. Part of me expected Zed to cry “Amil Gaoul, I choose you!”, but obviously the show’s writers lack my sense of humour. Instead, the tale gets bogged down as more characters are thrown into the fray, and just as many disposed of as unceremonious second thoughts. Unfortunately, this also leaves numerous plot holes and too many unanswered questions for my liking; surprising, considering how many episodes the show forces me to sit through. Even the conclusion plays out as somewhat of an empty husk; the finale plays out over a lamenting closing track, and every characters story played out in two minutes – something that never ends well...AnimationFor some reason, the clean lines and exotic apparel reminded me of that used in Avatar: The Last Airbender. Even the characters look like they come from far-flung continents with their varied features, however movement is hampered on occasion and instead of free flowing battles the visuals use cut scenes to avoid any tricky art design. The variety of different cities emphasised by striking architecture and other background scenry is beautifully diverse as the characters travel across the land.SoundAlthough the first opening track was a little dull and bland for my tastes, the second OP ups the ante and suits the show down to the ground with a more typical shounen-sound. Even the strange addition of jazz during some battle scenes fits the fantasy element, almost echoes of Cowboy Bebop. My only real audio complaint would be the voice acting. Brilliantly performed throughout the show, the final two episodes mostly consist of various characters screaming in anguish. Forty minutes of this and I am pretty fed up with the sound, especially as it spoils something that is excellent... to a point.CharactersAs much as I want to love Zed, I find he is distant and difficult to comprehend. His actions tend towards completely irrational and this leaves a void where the viewer should feel empathy for his situation. Seemingly having more to do with the scripting, rather than the character them self, the focus jumps between the protagonists whilst forgetting about those not in the main line of the camera, leaving many unresolved issues. The relationship between the two main protagonists is often left hanging and unexplained, and their actions are, for want of a better word, completely bizarre. The growth of the main character, Zed, is the focus of the storyline and this gives an overall feeling of a half-hearted approach to the surrounding cast. Roia is the token female whose fighting abilities are questionable at best. Instead, she is given a crappy healing touch that does the square root of sod all. And of course she has a crush on Zed! What fantasy show would be complete without an utterly pointless romance that goes nowhere and instead completely forgotten about as the real action kicks in? As per usual, the mushy love is flat and predictable. I didn’t particularly like any of the characters, and a lack of development from anyone apart from the main character makes the entire show akin to a grade C – not bad, but could try harder.OverallAs is becoming more and more common these days, anime series try to distill the awesome from other shows, and attempt to serve it up as something completely new. Kiba is no exception and tries to fit in too much, borrowing from many other fantasy epics. It is far from being a bad show, but definitely pales in comparison to the majority of the genre. A more focused approach to the main cast would have definitely made this easily recommendable; instead I would only prod it in the direction of those with nothing better to do.

I dropped this show after 10 episodes or so, but I wanted to like it. WHAT’S GOOD? Main character looks cool and so do other characters and their pets. Fighting scenes are well done. The story is surprisingly for the genre, very unpredictable.  Supposedly dead characters pop up again episodes later and people get captured or visit a different dimension in the middle of a fight or crisis.  You never know what's going to happen.   WHAT’S BAD? The main character looks cool but has a bland personality of a turnip-with-an-attitude.  This is the guy that's supposedly there to be liked and drive the story forward, yet all he seemed to do was annoy me with his I'm-too-cool-and-moody-and-brash-and-everyone-loves-me-for-it.  He's like Naruto but worse.  He is not endearing in any way. There was one part where the main character was supposed to undergo a trial.  One of those trials where it’s not really about your physical skills but your mental or spiritual aptitude. Well, the main character just wins by being stubborn and the old dude in charge of the trials just congratulated him for it.  Like if he had been wise or honest or something worth it of praises, but he just kept on being arrogant and brash.  Great!  The show is trying to shoehorn his character into my liking but showing other people approve of his personality.  Well, I still think he’s a punk!  And this happens several times.  Instead of getting slapped in the back of his head, everybody acts like “he’s just that way and he seems to be on the wrong but let’s support him anyway.” The fights are similar to Pokemon, or at least that’s how they immediately feel like. Everybody’s guardians are giant pets and in every single fight they get called or summoned to do all the fighting. After a while, I could not take the whole concept seriously. Characters act quite unpredictably too. For example, one of the characters gets a moody break and decides to go on their own back to a place (world/dimension/whatever) where they very recently got captured, held down and nearly killed in a ritualistic fashion just because that’s where part of their family was from! Yeah, that's reasonable.  Because nobody can relate to me, I’m just going to go to the place where I will most likely get re-captured and disemboweled. RECOMMEND? If you don't mind giant pets doing the heavy physical work for their masters, (the bulk of all the action scenes in this anime) and can withstand variable degrees of boring or annoying main characters, then I guess you can enjoy this well-animated series. For me, it didn't work though I wanted it too.  Luckily, there's more similar stuff out there.