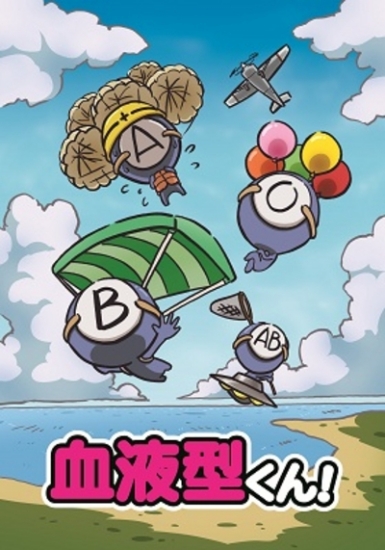 Warning this Review may contain spoilers-

Who knew that I would rate a short series above average (5 being average for me XD) but honestly this series made me laugh at how stupid it was, this was a short show about different blood types being faced with tasks and how each react. Sadly I couldn't relate to any because I couldn't remember my blood type...but to be honest I could be any of them XD

The story was limited, however it was good. People may see this as a series with only 2 minute episodes and would be instantly put off but if you like short comedies then this would be a good one to try. I mean, it is as simple as blood types do things but it has a certain 'charm' about it which drew me into completing this series and then moving onto the second series, plus waiting into anticipation for the 3rd to be subbed. There may not be much of a story but it is still worth it, for what it is.

I won't lie, but the animation is basic and again some people will be put off. I'm kind of glad though, the simplistic design of the characters and the animation style fitted the style of the anime overall. (However not too much to say here either).

Voiceacting was average and the opening theme was pretty average but like I said all this fits in with the charm of the series, how it is simple and easy to watch. The fact the voiceacting wasn't anything major allowed this series to keep to being simple and I really enjoyed that.

They're blood types, what's not to like. There isn't character development but you stll get to know the characters quite well to relate to the situation they're in, the ending (or was it the opening) clearly says what each character is like and then the audience can easily relate this to themselves...to put it simply, this show is relatable and simple but that is good.

In conclusion, I really enjoyed this and I feel people I missing out by judging a book by it's coverand you should check this series out.

PS- This review is for the Monthly Marathon June 2016