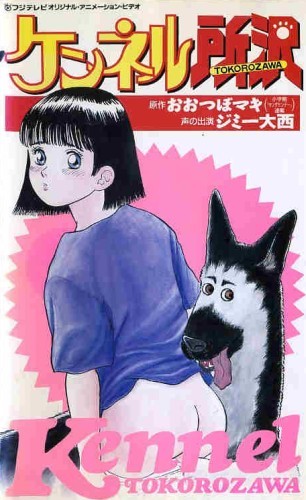 Oh boy where to begin. This is a girl meets dog romance. I will start off by saying that this anime will probably offend and disgust many. I'm pretty open minded and not easily offended. It's just a bizarre show. Not for kids. It's a comedy with fanserve and some nudity. This show is very Japanese, so for many Westerner's it might be too off putting and they may not see what's so comedic of the show. I personally didn't think it was funny only for the grooming/hair cut scene.

We are introduced to Rin Tin Tin a german shepard that lives with a family that owns a kennel. As soon as Rin said his name sounds like penis, I knew this was going to be a quite a show. Rin is a very perverted dog. His owner is a girl named Chika for short. Rin is in love with Chika and any opportunity he has to hump her he tries. Yes he tries to hump the poor girl. Rumors around Chika's school are that she and her dog Rin are an item. Yes, really bizarre. Even her friends are pushing her to have a relationship with her dog. Chika thinks about being a dog groomer and things ensue. Rin nearly gets killed and he and Chika go off to a resort for a short vacation. There Chika meets a boy. Theres is a scene with a octopus that I will say is very very disturbing. This story concludes with Rin practically trying to rape Chika on the shore of the beach.

Than we have another story where we meet Rin's archenemy an old math teacher. While on a school trip this teacher begins to believe that Chika likes him. A love triangle between a dog, old man, and high school girl develops. Just bizarre. The perverted dog versus the lecherous teacher. Chika is bitten by a snake on her butt..than the teacher is bitten..and finally Rin is bitten on the penis by a snake to end this show. Oh boy.

This show was cringe worthy, but when I start to watch something I like to watch it to the end. It's not very long. The animation looks like it's from the late 80's, I actually liked it. The sound was bland. Nothing execeptional. Characters were forgettable. I want to forget them.The story is sophomoric. I think I gave it a high rating of 4 overall because I like the animation style. I also think it's a show that's very Japanese. Different cultures see things differently. They find different things funny. This show is not recommended, because I know most people would just be offended. It's not a good show at all to begin with.

This shit is about dog boners.  But I kid, it's only about a dog who wants to bone his totally legal age owner, if 17 is legal in Japan because I don't know what the legal age of... shit man, whatever it is in your country, it's probably... prob... Shit, what the fuck. The fuck is all this? I'll tell you what it is. It's just like the OVA.

I don't know what to tell you. I mean, just look at the cover. You see that shit? You would think she's like... 12 or something. 14? I don't know, but younger than she actually is. And that dog is probably older than her when you convert dog years to human years. And let me finally get to the plot, where I explain shit:

The dog wants to bone her.

Bam. Done. That is the plot: Bestiality, and know what? Everybody is fine with it! Every fucking ass person is fucking fine with a fucking dog fucking humping the fuck out of his fucking owner because fuck all of these fucking fucks.

God... this is just... man. I still don't even know. The more I think about it, the more down I get. The more exhausted I get. The more haunted I get. And I didn't even get to the love triangle, which is... yeah. You can tell that it's wrong from what went on in the previous paragraphs.

But before I forget, watch this on Youtube. There is a bonus Live Action video that is one of the most hilariously depressing things that can come out of this entire thing because let me tell you, I felt like a sack of shit for laughing. And ahead of time, it's an interview sort of thing so don't get your hopes up on it being some Live Action dog boners.

Dog boners and bestiality... this is one of DTAB's lowest moments.

It's... it's 90s shit man. Shit looks like shit in the 90s in most cases for OVAs. It's some ghetto ass quality in Youtube and merely adequate but I do give it props for some nice round female ass. Can't deny the ass. And an obligatory shoutout to dog boner, which is the boniest of dogs.

FUCK. ALL OF THESE FUCKERS. This girl's friends are the worst pieces of fucking shit that ever walked on this sinful earth. Each and every one of her "friends" can fucking roll in a ditch. They promote and accept her dog's sexual advances to her, help out the dog, are complete voyeurs, sick fucks, complete assholes and commit acts of inhuman decency to her dog including shitting on the name "Sex Pistols".

And the dog... ohhhhh that fucker, that is one fucking shitfuck of a mutt. For his owner's kindness, he wants to repay her with his dick. It could have been some netorare shit all up in here in multiple points which would have actually made it worse. Kinda surprising given how repulsive most characters are. He may be honest in his feelings, but his feelings are putrid and rotten, full of scumbag douchebaggery that is only fueled by everybody elses' acceptance of their taboo "affair" that normal society would look shamefully down upon.

There is one nice guy, but he is looking after the girl because he thinks she is suicidal. Which I forgot to mention earlier: Suicide comes up a lot in this, and for good reason.

Nothing more needs to be said.

This has been another DTAB watch of questionable shit that you would never show to your family, friends or people you will see because they will judge you like a kangaroo court.