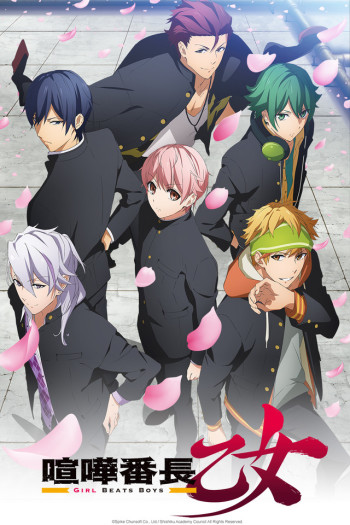 I stumbled upon this when browsing through some Danganronpa discussions (as the game this anime was based off of was made by Spike Chunsoft, the same company).

This has an interesting premise, but...wow, what a letdown.

So, this is the area where I usually break an anime down into the categories ("Story/Plot", "Characters", and "Overall"), but there's just so little to go off of that I'm going to have to break the format of my own reviews for this one.

Each "episode" is only about five mintues long.

Yes, you heard right; excluding the intro song (which does often contain some clips from the start) and outro songs, the episodes are about five minutes in length.  Within that five minutes are the sort of character inverviews one would expect to see from a Reality TV show as well.  Rather than show us the story as it develops within the anime, they have the characters explain it.

Though that captures a Reality TV show well, I don't think that's what this is going for.

I don't even know what makes the protagonist tick, and what she honestly thinks of the entire thing.  I don't know the background of her or any of the other characters, or just who in the heck allowed a school to get so out of control like that.

There really is no plot, the location makes no sense and no explanation is given to us, the episodes skip around and will start in a completely different place from where the last one left off, and though the characters seem like they would be interesting...we really never get to know them due to the five minute time limit.

I saw the Danganronpa animation; it was a major flop and missed out on explaining some of the major questions which the game covered.  However, it's quite a few heads and shoulders above this train wreck.

The fight scenes aren't bad when they actually occur, but don't expect any heart-pounding fights; they're over in a matter of seconds (they have to be, what with the entire episode only being five minutes in length).

Thus far, we also just see the same unnamed antagonists every single time, and thus far, we constantly get to hear the upperclassmen chatter randomly about the first years, but I can't name a single one of them.  If we were ever given their names, I forgot them because all we really see are portrait shots of them as they talk.

The anime feels like it was low budget to begin with, and quite frankly would have done much better with a full length episode to really flesh out all the characters.

Within the first couple episodes, we meet so many characters that it's hard to keep track of them, let alone see any development.

My guess is that this anime is supposed to lure people into buying the visual novel game, because despite the fact that it had an excellent summary and premise, the execution of the anime was terrible.

I wouldn't say "move along, nothing to see here"...I mean, the episodes are only about 5-6 minutes long, and it's one of those anime where you can just sort of let your eyes go unfocused and detatch your brain.

Honestly, I'm disappointed because I expected something much more when I read the summary.  Again, it had the potential to be so much more...but I suppose the anime is just really a snare to get people to buy the video game (which apparently goes much more in depth into the characters and their situations).

That said, it's still not the worst anime I've ever seen.

I'll admit the story did sound a little rushed at some points, but the character really make up with it with just how lovable they are.

I've seen it had a few pretty bad reviews, but I think if you consider it's target audience it hit well.

I only wish it was longer and the ending had more meaning behind it!

This anime was such a waste of potential. I'm a sucker for otome, and this plot seemed unique and interesting. I was disappointed by the length of the episodes but I hoped they could still tell a good story in the little time they had... Well, they didn't. There were some great characters (I personally love Konparu), but their introductions, back stories, and development were horribly rushed. The plot itself felt rushed, forced, and messy. There was so much potential in the twins' relationship and individual pasts, yet we got nothing. This short anime left me wanting much more, but not in a good way. To rate it a 5 is very generous of me. ...It has made me interested in the original Otome game, though, so I'll give it that,

This anime and it’s characters had so much potential, in mysteries that were never revealed and backstories never discovered.

This story is about an orphan girl who is unusually good at martial arts. Because of this and the fact that she is almost identical to a yakuza boy / young boss with a weak constitution, she is scammed on her first day of high school to switch with him and attend a delinquent all-boys hs in his place. Subsequently she meets a bunch of different guys, some who even played a major part in her past.

But why does she resemble the young boss so much? What does the family head think of all this? She is given a room at the family house, what do the room and house look like? We NEVER Find Out!!!🔥

I know this was just to promote an otome game but it would be so great if some video company picked it back up and finished it.💖

Kenka Banshou Otome: Girl Beats Boys was one of the biggest disappointments for me this year. It was originally a romance otome game, now turned 10-minute episode anime. While it promised me a kick-ass girl in a mean delinquent school filled with good looking guys, almost everything in the series fell flat. The characters aren't fleshed out, there is barely a plot, and overally so many details are skimmed over it's like watching cliff notes for a better series. Luckily, at least the episodes are short.

The story is simple and sometimes vague. Girl runs into long lost twin brother. Brother asks her to secretly take his place at an all-boys school for delinquents. She agrees with little resistance. She beats everyone up. The end.

The worst part about this series was the unbelieveable and simple story line. The reasons for her being asked, and agreeing, to secretly take her brother's place are almost non-exsistant or unclear (I believe the brother was Yakuza? It's not mentioned again). So right from the first episode the setting is far-fetched and confusing. Why doesn't he want to go to the school, did he just happen to run into his long-lost twin by accident? Why are there werid cuts to "interviews" with the characters?

The show doesn't get much better, as there doesn't seem to be an overall goal for the main character to achieve or any character development to go through. She was asked to control the school by fighting other students, but this is barely a 'goal' and she clearly isn't very motivated to acomplish it. She begins the series being super strong and doesn't need to work hard to acomplish anything. Most of the episodes are spent introducing characters, and then barely doing anything with them. The main character beats delinquents one by one and they instantly decide to be her friend. This is probably a side-effect of originally being an otome game, although this series has no romance in it at all.

So while I thought the series had potential, it was a disappointment. I would have preferred a much more detailed beginning, more scenes within the school to flesh out the setting, and much more content involving the main character.

One of the reasons the show's plot wasn't enjoyable was the lack of personalities, details, and characte development given to the characters. The most obvious of which is the main female character, Hinako, who suffers like many females in otome-turned-anime series: She is incredibly boring. She has a dull, softspoken voice, can't do anything for herself, and lacks any personality. This series needed an interesting and driven lead ton compete with the tons of testosterone, but almost everything she does is influenced by the men surrounding her.

The second reason this series failed is the lack of commitment to the side characters. Being from an otome game, all the male character designs and personalities were different and interesting. They all had potential in the first episodes they were introduced. However, after they join Hinako, they become background characters with little purpose. Most likely this was because of the short run-time.

Overall, this show lacks substance. It really felt like huge chunks of the show, mostly plot and character development, were cut from the show. It really did not work well as an 10-minute anime. I didn't find any enjoyment in this, only disappointment from what the synopsis promised.