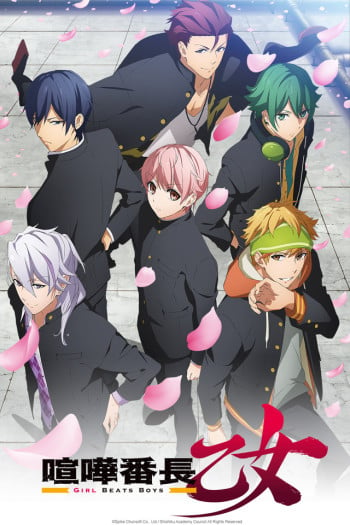 Orphan heroine Hinako Nakayama suddenly reunites with her twin brother Hikaru, who asks her to take his place at Shishiku Academy, a private boys school infamous for its rough-and-tumble student body. Being the child of a powerful Yakuza family, the Onigashima, Hikaru is obligated to become the leader of Shishiku Academy. Hinako will have to hide her identity and fight to control the school. How will Hinako deal with a school full of handsome boys who let their fists do the talking rather than talk about their feelings?

The Road to Conquering Shishiku

Fight In the Rain

Show 'Em What You're Made Of! The Great Study Session

Taking On All Comers! Love, Fists, And Best Bros

I stumbled upon this when browsing through some Danganronpa discussions (as the game this anime was based off of was made by Spike Chunsoft, the same company). This has an interesting premise, but...wow, what a letdown. So, this is the area where I usually break an anime down into the categories ("Story/Plot", "Characters", and "Overall"), but there's just so little to go off of that I'm going to have to break the format of my own reviews for this one. The reason? Each "episode" is only about five mintues long. Yes, you heard right; excluding the intro song (which does often contain some clips from the start) and outro songs, the episodes are about five minutes in length.  Within that five minutes are the sort of character inverviews one would expect to see from a Reality TV show as well.  Rather than show us the story as it develops within the anime, they have the characters explain it. Though that captures a Reality TV show well, I don't think that's what this is going for. I'd love to touch on the characters, but with only five minutes per episode, it's hard to get to know any of the characters. I don't even know what makes the protagonist tick, and what she honestly thinks of the entire thing.  I don't know the background of her or any of the other characters, or just who in the heck allowed a school to get so out of control like that. There really is no plot, the location makes no sense and no explanation is given to us, the episodes skip around and will start in a completely different place from where the last one left off, and though the characters seem like they would be interesting...we really never get to know them due to the five minute time limit. I saw the Danganronpa animation; it was a major flop and missed out on explaining some of the major questions which the game covered.  However, it's quite a few heads and shoulders above this train wreck. The fight scenes aren't bad when they actually occur, but don't expect any heart-pounding fights; they're over in a matter of seconds (they have to be, what with the entire episode only being five minutes in length). Thus far, we also just see the same unnamed antagonists every single time, and thus far, we constantly get to hear the upperclassmen chatter randomly about the first years, but I can't name a single one of them.  If we were ever given their names, I forgot them because all we really see are portrait shots of them as they talk. The anime feels like it was low budget to begin with, and quite frankly would have done much better with a full length episode to really flesh out all the characters. Within the first couple episodes, we meet so many characters that it's hard to keep track of them, let alone see any development. My guess is that this anime is supposed to lure people into buying the visual novel game, because despite the fact that it had an excellent summary and premise, the execution of the anime was terrible. I wouldn't say "move along, nothing to see here"...I mean, the episodes are only about 5-6 minutes long, and it's one of those anime where you can just sort of let your eyes go unfocused and detatch your brain. Honestly, I'm disappointed because I expected something much more when I read the summary.  Again, it had the potential to be so much more...but I suppose the anime is just really a snare to get people to buy the video game (which apparently goes much more in depth into the characters and their situations). That said, it's still not the worst anime I've ever seen.

This anime was such a waste of potential. I'm a sucker for otome, and this plot seemed unique and interesting. I was disappointed by the length of the episodes but I hoped they could still tell a good story in the little time they had... Well, they didn't. There were some great characters (I personally love Konparu), but their introductions, back stories, and development were horribly rushed. The plot itself felt rushed, forced, and messy. There was so much potential in the twins' relationship and individual pasts, yet we got nothing. This short anime left me wanting much more, but not in a good way. To rate it a 5 is very generous of me. ...It has made me interested in the original Otome game, though, so I'll give it that,

Call me crazy but I thought it was so damn cute. >///<  I'll admit the story did sound a little rushed at some points, but the character really make up with it with just how lovable they are.  I've seen it had a few pretty bad reviews, but I think if you consider it's target audience it hit well.  I only wish it was longer and the ending had more meaning behind it! 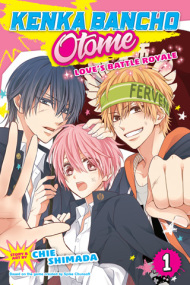 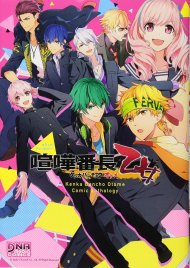