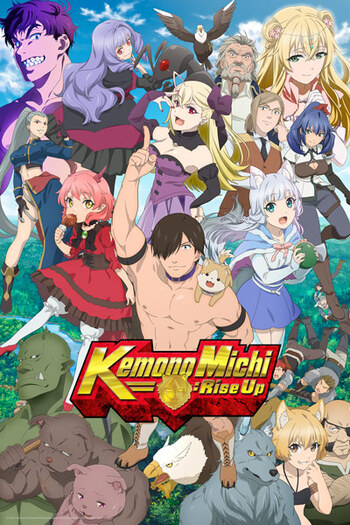 While this show might seem similar to konosuba at first, it doesnt rely on its waifus and pure stupidity from its characters for its comedy, This show opts to make the entire show extremely stupid.

people say there is no story for this show, or the story sucks, but i say.... the story is there, but its just SUPER STUPID. Looks like the writers wrote an actual script, then got drunk on pure laboratory alchohol and did magic shrooms at the same time, then edited the script.

.... so technically, there's a story. its just a tiny bit wacky

This show is the purest form of chaos. another unspoken category of comedy.
if you're a person that likes grand blue, nichijou, asobi asobase ... etc, you'll enjoy this show.

Comedy show about a guy being summoned into a fantasy world - a satire to all these isekai animes that have been popping up nonstop. Seems like a very small budget production, characters faces and body parts often look like they were drawn in a rush, but not so much as to ruin the it overall.

Nothing special, but it may give you some good laughs.

This is a very easy anime to watch. There is nothing particularly deep or new about it, its just fun. The characters have enough personality to either make you like or dislike them. Its a comedy with a little fan service thrown in. The animation is good and the voice actors do a great job. I like it!

Who is this show for? This show is for someone looking more for a comedy mix with a lack of overall story.

For whatever reason, the main person was brought to some other world to kill animals. Since he is an animal lover, he attacks the people asking him for help. And my personal problem with this is 2 things.

1. It looks like there is already a ton of people dealing with the problem.

2. If he really gave a crap about the animals, then he should know hunting actually helps. Like overpopulation of say deer will cause them to starve (look it up where we had to send a number of wolfs to an island due to this), and an overpopulation of lets say wolfs will kill too much.

Which means the "animal lover" wants animals to die, while at the same time saying he loves them. I wonder if he is the head of PETA.

Anyways, I'm not going to drop this show since there isn't much else on. But, I wouldn't recommend anyone to go out of their way for this one.