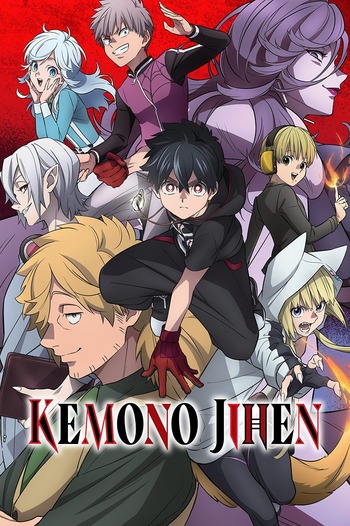 In the spiritual land of Kunisaki, Highschool freshman Nonoka Kibe runs a consultation office for the supernatural. As the only one who can see them, her goal is to aid in any way she can, along with her oni friend, Chibiki, and her Yamaha TownMate.

The local gods are out of followers, and only have one yokai to give them power! Can Mizuchi, the yokai, bring any more into the fold?

Nate Adams is just an average kid until the mysterious Whisper gives him the Yo-kai Watch. Now he can see what others cannot: Yo-kai of all shapes and forms!

Although he may appear rough-and-tumble, Jiro Azuma’s compassionate side emerges when it comes to the furry critters he can communicate with. But Jiro's soft spot for animals gets him in major trouble when a suspicious stray cat fuses with him, granting him exceptional power but also dragging him into humanity's hidden battle against powerful Japanese spirits, mononoke.

In a futuristic Japan, a castle suddenly appears one day at the foot of Mt. Fuji, bringing with it a massive influx of youkai. The youkai attack Tokyo's Chuo district, bringing it to its knees in a day of terror known as the Chuo Riots. A young girl, Makoto, is caught in the centre of it all and witnesses the brutal death of her mother. Years later, the Government have decided to repatriate the youkai in order to curb the country's issues with a declining workforce and population. The JSDF also create a small anti-terrorism task squad, the Tachikawa Task Force, in order to curb the violence between youkai and humans. At the head of the Party is none other than Makoto, who is now harbouring a secret power and a burning hatred for youkai.