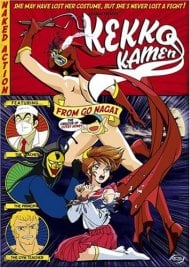 StoryAs a hardcore ecchi anime fan, I find there are very few "naughty" shows I turn my nose up at. In fact, they're usually a great way to sit back, relax and have a good giggle at the completely mindless fun bouncing around on screen. Part of the problem now is that originality in this genre is extremely difficult to find, especially when watching some of the older (and for some reason, more risque) shows. I went into Kekko Kamen after a joke recommendation placing it alongside Butt Attack Punisher Girl. Yup, the title says it all - mindless ecchi of the most perverted kind. The similarity between the two is quite striking. Just like in Butt Attack Punisher Girl, a scantily clad superhero - the titular Kekko Kamen - takes the initiative to smite the perverted opposition on her school campus using some extremely questionable wrestling moves. The culmination of flimsy plotline and extreme stereotyping results in pure, unashamed fanservice. The wafer thin story usually revolves around one completely hapless and innocent school girl Mayumi, who is regularly punished for her failing grades. This discipline usually results in her very perky and ample bosom being exposed, and then her pathetic cries are answered by the masked and butt naked Kekko Kamen. Fighting for "Love and Justice" apparently makes the indecent exposure perfectly acceptable as she deftly sweeps aside her next foe. The predictability of each kinky predicament numbs the viewer and kills off what could have been some comedy gold moments. With content that may have been funny in its day (the show is now 18 years old), the recent outpouring of ecchi might have taken the edge off the humour for todays audience. The over the top speeches by sexy Kamen are usually met with witty retorts by the enemy, and fans of the genre might appreciate the utter depravity of the humourous advesaries. Usually leading to some rather amusing punishment situations for poor Mayumi, the girl is subjected to hilarious situations as a study tutor who chastises poor grades with some rather adventurous tentacles. The extreme ecchi will be the shows' saving grace for some viewers, and the final nail in the coffin for others.AnimationAs is the case with a lot of older and dirtier animation, the production budget was not huge, and as such the anime looks middle of the road. That said, it seems the artistic team now have a speciality in drawing breasts having had plenty of practice drawing the sublime female curves throughout four short episodes. Although not bad, there is very little else to make Kekko Kamen stand out in the artistic department. Facial expressions are very limited and simplistic, whilst action scenes are mostly spent covering the modesty of Kamen and her open legged attacks. Consequently, you're left with a drudgery of animated mediocrity.SoundSadly lacking an opening theme, I had to settle for one of the funniest and bizarre ending themes I have heard in a long time. The funky tune is accompanied by such original lyrics as "What a nice set of buns, nice set of buns, of buns - thats our Kekko, Kekko Kamen". Although not greatly forthcoming in the soundtrack department, the Japanese voice actors were all highly suited to their roles. From the dominant, sexy tones of Kekko to Mayumi's whimpering lament, the seiyuu are all well chosen.CharactersThe female protagonist, Kekko, leads the way in the character freak show. Once you get over the fact she fights crime in her birthday suit, the stripped hero doesn't offer a whole lot more. With no backstory to the character, viewers are left wondering who exactly she is and why she became the envoy for feminine justice. While occasionally feigning shyness and covering her boobtastic assets, she spends most of the time flying across the screen in such devastating moves as the "Muff-o-cation ring" in what can only be described as a brashly stereotyped wet dream. Mayumi comes across as a whiny, feeble and pathetic individual with the depth of a puddle, ending up in some extremely compromising positions. Living up to a perverted otaku's desires, she experiences such questionable situations as being placed naked onto a rotating swastika and having her clothes whipped off by an enthusiastic nazi woman. Subjecting the poor girl to such bizarre atrocities is a whole host of evil teachers, doctors and the Principal Toenail of Satan. As well as the crazy naming choices, the characters suffer from zero development - although, can anything else really be expected in four episodes of debauched mayhem?OverallBlatantly laughing in the face of womens rights, Kekko Kamen is a feminist's nightmare. It uses some very questionable material to get laughs, and quite often falls flat on its face. However, if tongue in cheek ecchi humour is your cup of tea, then the show definitely delivers on its promise of fanservice, over the top perversion and produces one of the most naked female characters currently listed on Anime-Planet.

Before starting this anime, I wasn't actually expecting anything good. Heck, it was chosen as an event for the Damn, That Anime is Bad club for a reason, and going by the only two reviews this site had at the time - one scoring it 1.5/10, the other 5/10 - and the average AP-score of less than 1.8/5, you shouldn't expect anything grand. Add to that the ridiculous premise, and your hopes for anything good would probably be very small or even non-existent (unless you think tons of sexual content automatically makes an anime good, of course).  So maybe it was because I had sufficiently lowered my expectations, but I was pleasantly surprised by this anime. Make no mistake here, I'm not saying it's good by any means, but it isn't unbearable to sit through either. In fact, if you round up some other people to watch it with, it's quite entertaining. Of course, you need to be able to tolerate tons of sexual content, and girls almost getting raped to get through all this - but hey, it's still better than Kagaku na Yatsura.  Story (this part came out a little long, so I put a tl;dr at the end of this section) So, what is this anime actually about? Well, it's about the Spartan Institute, an elite school where people whose grades are too low get punished. But only if they're girls, because - as the principal so eloquently stated it - "nobody cares about guys". And you know what? The principal is correct here, because I sure wouldn't watch the anime if the guys got the same punishments the girls get. I mean, those punishments involve all the kinds of stripping you could think of: ripping off the clothes with hands, mechanical hands, or tentacles, whipping till they tear, slicing them apart with knifes or swords... and of course, this can be done in front of the school or in private, depending on the whims of the punishers and the principal.  Luckily, there is a woman who wll stand up to fight against these overly harsh punishments: Kekko Kamen, "the girl who hides her faces but exposes all else". Because apparently you can't fight for love and justice while wearing clothes. Then again, kekko kamen's ultimate move - which I'm not going to spoil, nor will I ever forget it - would be pretty much impossible with clothes on. Whether or not that move has any point other than providing extra fanservice is debatable, but I'd say yes, because it's absolutely hilarious. Even upon re-using that move, things are spiced up a bit by taking the move to the next level.  The above might seem like a perfectly fine premise for a parody. It is. The problem is, that you need more than a good premise to make a good show. Apart from the lack of continuity between the episodes - why are there nazis in episode 1, but never again after that? - there is also the problem that it gets repetitive. The setup for each episode is pretty much the same: the principal appoints a new punisher, Mayumi gets punished for her low grades and Kekko Kamen comes to save her by beating the punisher and the principal (why Kekko Kamen never helps anyone else remains unclear), after which the principal promises to stop the punishments so he can resume them anyway in the next episode. Of course, there is still variation in the kind of punisher for each episode, but it's still basically the same. Which is also why I felt that episode 1 was by far the best of the 4. The main good point was that some of the ridiculous things made laugh sometimes (a couple of the fourth-wall breaking jokes were really good), and there were a couple of good jokes too. Some other jokes fell flat though. tl;dr: All the points I can give to the story are for the premise and the comedy: although the comedy didn't always work out that well, there are a couple of well-executed fourth-wall breaks, and the over-the-top ridiculous things also got me giggling sometimes. I won't lightly forget that finishing move... ( ͡° ͜ʖ ͡°) Characters When it comes to characters, it's sad to say that there's practically nothing to say about them. We don't even know who Kekko Kamen is, nor do we get a backstory, so its not like we can sympathise with her. We have no clue why she became a nudist fighter for love and justice.  For the other characters we only get to know one side of them: "she's an SM-queen" - "her grades are bad" - "he's muscular" - "he's a pervert" - "he's a pervert too" etc.  The best part about the characters was the principal's name: Toenail of Satan truly is at Welldone the Pussyhand's level of ridiculousness.  Animation Animation and artwork are mediocre (for as far as I can see it relatively to the time it was released), but not all that terrible. Bonus points for nipples that glow in the dark. Sound The soundtrack wasn't all that impressive, although Kekko Kamen's themesong was fitting in this series. The outro was great, mainly because of the lyrics about Kekko Kamen's nakedness, which makes it hilarious and actually better than the anime itself.  As is DTAB-tradition, I watched it dubbed to try and make it extra terrible. To everyone's great surprise, the dub was actually quite good. Overall If you're looking for a well-written story, don't watch this. If you can't stand ecchi/nudity/sexual content/depraved stuff, don't watch this. If you're looking for a nonsensical, sexual content-ridden superhero-parody, then you can definitely give this a try. In spite of the bad parts here, it definitely has the potential to entertain some people for at least 20 minutes. 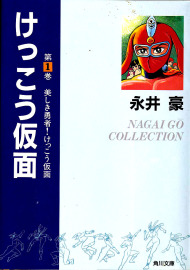