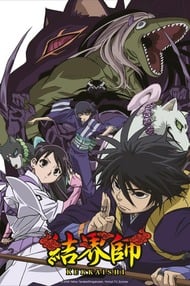 I would never have guessed they would actually make an anime based on the old Solomon’s Key videogame… Animated by Studio Sunrise, which means it will have cool robots… What? It doesn’t have robots? In that case it doesn’t have anything cool. Directed by Kodama Kenji who is somewhat famous for his work in City Hunter and Case Closed. He is not bad but surely has no experience in shows with story continuity, something which shows up easily in the anime. Kekkaishi is definitely original when it comes to the basic concept of its battles. The characters are creating spiritual cubes that have all sorts of uses, and as such each battle is ten times more interesting just for the sake of watching what kind of a trick they will pull off. You see, those kekkai cubes can be used to trap monsters, to destroy anything trapped inside them (mostly monsters, lol), to be stepping stones to reach high places, then can even become walls to shield the heroes from incoming attacks. It sure felt a lot more tactical than just firing energy beams at each other. While the anime was building up on this concept and flavouring its passive or indirect attack patterns, I was really enjoying it. But then they had to ruin it all by upgrading this unique concept to a generic direct attack method and afterwards I began losing my interest. It may feel weird the way I began with mentioning the concept and not the story or the characters, but the truth is that was the only memorable and noteworthy thing in the whole show. All the rest are mediocre shounen stuff we have seen a million times already; youths with superpowers who must protect their friends; end of story. You want more details? Fillers, long-winded flashbacks, monsters of the week, last moment saves, sudden power-ups, villains who send only one monster at a time instead of ALL OF THEM for a clean victory. If there is something less noteworthy yet still unorthodox that I feel important enough to mention, is how the main heroine IS NOT USELESS IN BATTLE. Yes, sounds impossible to believe after the myriads of big breasted bimbos like Inoue or nagging useless old maids like Sakura, yet it is true. Tokine is of almost equal footage when it comes to be proven worthy in battle. Of course the hero, Yoshimori, still manages to surpass her with a hundred times less effort, despite the fact she is training hard all her life. And despite she clearly has the hots for him, she never does the slightest to admit it and leaves everything as nothing more than a vague platonic relationship. Oh well, we can’t expect TOO much fairness in a shounen show. After all they survive only because the villains send one monster at a time. The production values are in all mediocre for their time. The character designs are generic, the backgrounds don’t excel in details, and the visual effects are ok 3D magical cubes and environments, and lots of pretty sparks when something blows up. The soundtrack is generic pop pieces and the voice acting is standard performance.Eventually, what ruins the show is how it refused to evolve its unorthodox formula further and instead went back to standard shounen mediocrity. The kekkai method of fighting lost its magic after they turned it to almost simplistic energy beams, the romantic aspect never heads anywhere, the characters never stand out as special or memorable, and the whole story is three lines long to describe. There simple isn’t enough material to bother liking in here, or even enough motivation to rewatch the series. I don’t recommend this series as nothing more than a good idea that was handled poorly. And now for some excused scorings. ART SECTION: 6/10 Analysis: General Artwork 1/2, Character Figures 1/2, Backgrounds 1/2, Animation 1/2, Visual Effects 2/2 SOUND SECTION: 6/10 Analysis: Voice Acting 2/3, Music Themes 2/4, Sound Effects 2/3 STORY SECTION: 4/10 Analysis: Premise 1/2, Pacing 0/2, Complexity 1/2, Plausibility 1/2, Conclusion 1/2 CHARACTER SECTION: 5/10 Analysis: Presence 1/2, Personality 1/2, Backdrop 1/2, Development 1/2, Catharsis 1/2 VALUE SECTION: 2/10 Analysis: Historical Value 0/3, Rewatchability 0/3, Memorability 2/4 ENJOYMENT SECTION: 1/10 Analysis: Art 0/1, Sound 0/2, Story 0/3, Characters 1/4 VERDICT: 4/10

Story Kekkaishi is about two school students, Yoshimori and Tokine, whose family has guarded a sacred ground which resides on the ground underneath their school for the past 400 years. Yoshimori and Tokine families are rivals in this task as both believe that their families are the “legitimate heirs” however they both have a soft side for each other since childhood. Both clans use kekkai, which is a form of supernatural power which erects an energy barrier, to capture and destroy “ayakashi” which trespass and absorb the energy on the sacred ground.   Animation The animation for this anime was pretty standard. The characters models were pretty good and the fight scenes were pretty well done.   Sound The sound is something that generally that compliments the animation. Kekkaishi music almost goes unnoticed but when you’re watching it the music though unnoticeable at first it does a great job of bring the characters a life and helps share the emotion with the audience. The opening song was great I enjoyed listening to it multiple times however the endings, in my opinion, left something to be desired.   Characters The story did a great job of portraying the characters in general. The audience feels like it has a deep connection with the characters and wants them to triumph. The story does go into the character’s past which displays how they became the person today which is nice. Each character has their own quirk which is a nice touch without going overboard.   Overall Overall I believe that Kekkaishi is an anime definitely worth watching. The characters, music and story alone are slightly above average however in combination it creates a great anime. The comedy is light hearted and the action is abundance but neither was overdone. 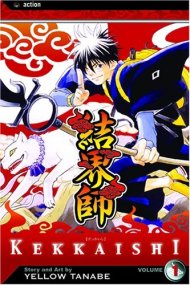