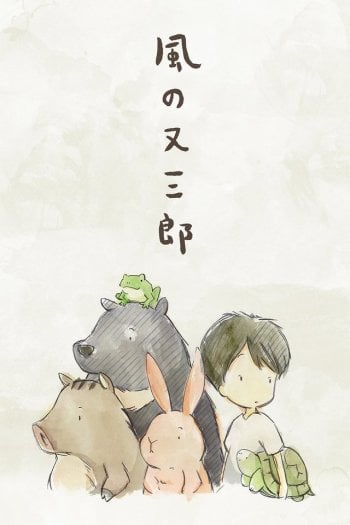 One day while playing hide-and-seek with his friends, Toichi finds an old oil lamp in the attic. Seeing how entranced his grandson is with the object, the boy's grandfather decides to regale him with a story from fifty years ago. Minosuke is a young orphan who picks up any odd jobs he can in order to scrape a living. After taking on another errand, Minosuke becomes enamored with the various lamps decorating the night-time streets in town. Determined to illuminate his village with this new technology, the strong-willed boy begins selling the items to his fellow villagers and soon becomes a successful merchant. However, the advent of electricity soon spells doom for the humble lamp seller's trade...

First-grader Masaya-kun is a crybaby despite his large stature, so he can't walk by himself on the dark path to school. The one who holds his hand is Akiyo-chan, a tiny but capable second-grader. Masaya wants to be strong like Akiyo and admires her, but one day, something happens that leaves Akiyo in tears. To lift Akiyo's spirits, Masaya goes trekking to the distant Ipponsugi forest to find the spotted bellflowers that Akiyo loves. But there are still many paths in the world unknown to him.

Noel Hiragi used to live alone in the city, until her mother sent her an old wardobe one day, claiming that it was "her turn" to have it. Little did the woman know that she'd return home to a strange boy sitting in her apartment eating crackers! When he disappears into the bottom drawer of the dresser, the young office worker decides that she’s simply had too much to drink and dismisses the event. However, the following day Noel wakes up to a sparkling clean apartment, a freshly cooked breakfast and not one, but SIX people living in her wardrobe claiming to serve the current mistress of the Hiragi household! Now Noel must adapt to living with her new housemates as she learns the joy and importance of a well-kept household.

In the children's room of the Amanogawa household in the neighborhood of Shichifukujin, there are five Engimon: Haruo (a papier-mache dog), Kin-chan (a goldfish paper balloon), Hebikura (a bamboo snake), Chief Daruma (a daruma doll), and Koume (a Kokeshi doll). They are always watching over the siblings of the household, Himi and Yamato. One day, an Engimon from somewhere else appears, and Himi leaves the house to chase it. Haruo and his friends come alive, much to Yamato's surprise, and together they go to rescue Himi.

In a futuristic world, the "Nanorace," people whose genes contain nanomachines that grant them special abilities, are controlled and suffer prejudice from the "Purerace" of normal human beings. Beck, a legendary hunter with the power of "Red Ash," aims to undergo the surgical procedure to become Purerace. Alongside the large yet timid mechanic Tyger, they use their parallel machine to fly to the old world, doing dangerous jobs. One day, they suddenly run into Call, a girl pursued by the duo of Safari and Stripe. Call, Beck, and Tyger together travel to the clockwork world. But Safari, Stripe, and their leader Deny, stubbornly pursue Call, and are finally in a position to make their attack on Beck and his friends.