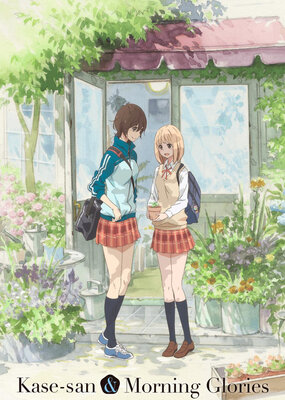 Asagao to Kase-san throws us into the start of a relationship. Two girls have started dating, but they're both very inexperienced. The story's narrative focuses on their initial troubles with communication and understanding, while also cluing us in on who these characters are and what their lives are like. It's a very simple story, and it only lasts 50 minutes or so, and I wouldn't highlight the narrative as an important aspect of the show. Rather it exists as an excuse to show us a beautiful romance. And it really is beautiful... The visuals are stunning. All of the backgrounds, and I mean all of them, are drawn with the classic pencil and watercolor technique, and they look gorgeous. Every building is hand drawn, every petal is perfectly placed, and every splash of water has a beautifully transparent reflection to it. The blemishes and imperfections of the stone walls or worn fabrics are the details you can only really find in analogue art such as this, however despite this heavy analogue approach, Asagao to Kase-san doesn't suffer from any of the expected drawbacks. When it comes to drawing rigid objects such as bicycles or metal fences, the artists do a grand job of making sure the shape and the details are exact.Of course with a show that utilises the pillow shot as much as Kase-san does, you'd only expect for these background cutaways to look good, but the show also makes sure that the 2d animation matches the detailed storybook-esque backgrounds. This is done in multiple ways, primarily with the stellar color design of each shot. For example, if a shot's lighting is going to be orange (maybe during a sunny afternoon scene) the primary colors on display in the 2d animation will be yellows, oranges and reds. Here's an example of that very shot: This color selection is also typically used to portay a specific emotion. That orange tone is used quite frequently to portray the constant motif of romance, often as a sort of budding or struggling happiness, but the palette will strengthen into a red during particularly passionate moments. It even goes so far as to drench the screen in purple when the couple are at their most lovey dovey. In ominous moments, the dark profile of a person will be used to block out a light, be it from a window or from the sky. The other way that the backgrounds are blended seamlessly with the animation is with various effects in compositing. The blurring in and out of characters as they move between the foreground and background is one such example. Another is in the screened gradient overlay attached to certain shots. A simple diffuse effect is probably the most common effect I noticed however, being the effect that smooths out harsh lines and makes sure everything looks even. I haven't actually touched upon the 2d animation or the character designs at all, but it's safe to say they are equally pretty. The characters have these big detailed eyes that convey a lot of information, and again the color choice is great here. The eyes of the main duo are a yellowy orange, which matches most of the color selection for the entire show, however the great thing about the eye design is that the bottom half is a bright yellow while the top half is black. In happy moments the camera can focus on the bright yellow, and in darker moments the dark half can instead become the focus. Very versatile eye design.The characters are very expressive in other ways too. Their facial expressions, especially the different mouth shapes, are very fun to watch.  The degree to which a character's hairstyle is well kempt or not is also a tool utilised frequently for both comedic affect and just general use.There were no moments of extreme sakuga-tier animation, at least not in a conventional sense, but I think that's fine. This is a very simple story with a very simple structure. The prettiest moments come when we stop and reflect on the good things, and Asagao to Kase-san understands that. These moments of reflection would be nothing without accompaniment. The music throughout is absolutely perfect. There's a constant rather classical instrumental playing. It changes from one style to another, from one theme to another, all to match the current scene without feeling or sounding like a simple cut and trim job. I'm certain the show isn't backed by a single track, but it does a good job of capturing that old school Disney style of composing to perfectly match the animation. It's a subtle beauty, an underplayed beauty. That's Asagao to Kase-san in a nutshell. Subtle beauty. The show doesn't do any one thing in a fancy or flashy way. It doesn't go out of its way to do something new or spectacular. It simply gives us a romance story—one of a genre we don't have anywhere near enough of—and trusts that romance enough to give it space and respect. It may not be grand or bombastic, but it is the kind of quaint romance we all had (or dreamed we had.) Nothing complex, but everything we could want.

It is a short and sweet "Short Movie" that gets straight to the point. The two girls are in love and it is a sweet romance between them. However there really isnt that much plot or development as it is only apromotional video for the manga.So its literally only an hour long. So if you want the full development of how the actual story goes then you need to read the manga. However, all in all, it was a nice, sweet and loving short anime. Overall, 7/10.

This anime is very clearly an adaptation meant to flutter the hearts of those who have already read the source material, and, to that end, perhaps it succeeds.  But for someone who did not (and likely will not, given how this went) read the comic, Asagao to Kase-san is…fine. Maybe even pretty okay, if you’re in a good mood. Because, given that there is no context for who these girls are or what they're like--which, as an ardent defender of Glasslip, is a storytelling method I absolutely advocate for--there is a real issue with the presentation of this OVA: it feels like you are supposed to already know what it is about, who the characters are, and everything that happened before and after what you are shown. And, again, while this is an absolutely doable storytelling technique--this literal slice of life, wherein your hand is not held and you must suss out what you are watching as you watch it--the OVA did not do enough to make me feel like I did, even if I didn’t.   If a story is going to start in the middle of what would otherwise be a much longer story--and this is undoubtedly culled from various, disparate chapters well into the manga--it doesn’t need to convince us a thing is true (like, say, that a relationship is strong), just convince us to accept that it’s true. In fact, it must make the assumption of that thing being true unavoidable. That is, contextually, the story we see unfold must only make sense if that thing is assumed to be true. But Asagao to Kase-san waffles between using this glean-as-you-go method for telling the story and the antithetical method of overt expository narration that tells you how every moment is meant to be interpreted.  As such, the storytelling clashes, resulting in less and less reason to trust the fundamental insistence about the relationship of our main characters. They seemed not to have any chemistry, didn't change or grow or do anything particularly interesting or romantic--to the point where the dramatic climax didn't elicit any kind of sympathy (from me), because nothing we’d been shown up to that point led us to believe the pillars upon which that conclusion was based were ever true to begin with. Essentially, Asagao to Kase-san just does not feel cohesive, does not feel thematically linked, does not seem to have a unified vision. For every blush-inducing phone conversation or trip to the bus stop where they couldn't bear to part ways, there were a million more moments of them clearly not being on the same wavelength--and not in a "love is overpowering and confusing" kind of way. In a "you two should see other people" kind of way. They seemed so very much a childish romance rather than high school sweethearts--but without the point of the story being that their self-perceived great romance was anything but.  I didn't buy it. I didn't buy them. And there’s a very good chance you won’t either.  Then again, maybe you’ve read the source material. In which case, it’s probably pretty okay. 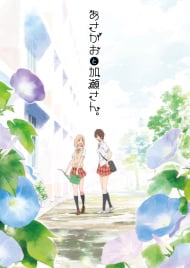 Your Light: Kase-san and Morning Glories 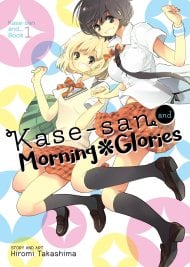