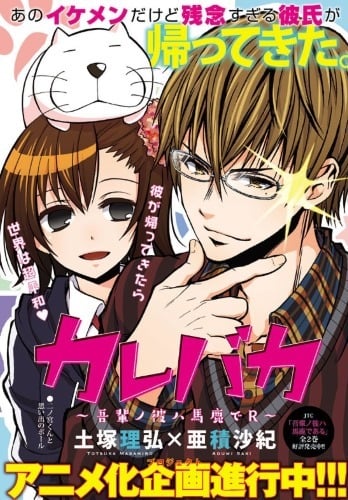 If you're looking for anime similar to Kare Baka: Wagahai no Kare wa Baka de R, you might like these titles.

funniet one ever create.The level of of idiocy is way above the roof.The characters are hilarious and alot ofcomplications along the way.

Chitose Sakuraba is an energetic 11-year-old girl, while her older brother works for the town hall next to the school.  Without regard to her surroundings, she rushes to the office to spend all the time with her her brother whenever she has free time, causing all sorts of trouble. Chitose, her close friends, homeroom teacher, and even her older brother's superiors will get pulled into this slapstick, comedic adventure that you won't want to miss!

A series featuring super deformed versions of the Hamatora characters.

Shuri Komori is a 14-year-old girl, who is so nice that she can not turn down people’s request. She gains amazing abilities while she fulfills people’s request. There are many fun & happy things in her life, since she is an adolescent middle school student after all!

Asuka is a high school student who sees the apparition of a dead student named Haruka, asking Asuka to find her body. As the story progresses, Asuka and her friends attempt to find the eight scattered pieces of Haruka's corpse in the school, and learn more about the Red Person that is hunting them as they do so. The Red Person hunts students who are alone at school to kill them, and until they exit the school gates, the Red Person will keep appearing before them. When the Red Person kills a student, it scatters the student's body into eight pieces, and tasks another person to find the pieces in the school. If Asuka fails to find Haruka's body, the day will keep repeating and she and her friends will keep dying until they do.