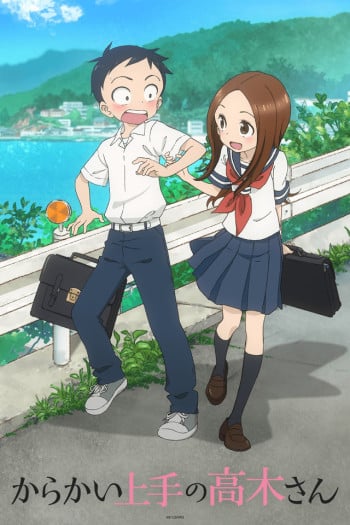 Nishikata doesn't know what to write for his calligraphy class, so Takagi-san suggests they should both write what they want from each other. Nishikata wants Takagi-san to stop teasing him, of course, but what does Takagi-san want from Nishikata?

Anime-Planet users recommend these anime for fans of Karakai Jouzu no Takagi-san. All available to watch right here, right now!

In the middle of class at a certain school, Rumi Yokoi, a diligent student, has her in-class life turned upside-down when her next-door desk mate "Seki" (full name Toshinari Seki) begins to play by himself at his desk in class. Although Yokoi is irked by Seki's distracting yet intricate playtime, she finds herself being drawn into his interesting...

Its similar. First of all its the same studio. You will laugh a lot. The main difference is the duraction. Karakai Jouzu no Takagi-san is 24 minutes which is a lot and it can tired you. Tonari no Seki-kun was only 11 minutes.

The shows are similar as their both about a boy and a girl that sit near the window the only difference is in Seki-kun the boy is doing weird things that the girl finds distracting and in Takagi-san the girl is deliberately doing things to mess with the boy.

Both animes are very similar, middle school student keeps teasing / distracting a classmate. (high school in Tonari no seki-kun but they totally look like they're in middle school)

Only difference being that in Tonari no Seki-kun it's a BOY distracting a girl classmate NOT ON PURPOSE while in Karakai Jouzu no Takagi-san it's a GIRL teasing a boy classmate so it's obviously ON PURPOSE :3

As leaders of their prestigious academy’s student council, Kaguya and Miyuki are the elite of the elite! But it’s lonely at the top… Luckily for them, they’ve fallen in love! There’s just one problem—they both have too much pride to admit it. And so begins the daily scheming to get the object of their affection to...

both are about boy and girl that are clearly in love but refuse to confess and instead they tease eachother in a battle of wits. both shows are also episodic and episodes are divided into several segments instead of focusing on one scenario each episode.

Both feature two likable leads who are obviously in love competing in a battle of wits with their crushes.

Both are episodic in nature contains mini-vignettes within each episode.

While Teasing Master Takahi-San is far more innocent in its comedy than some of the “Three’s Company” style humor of Kaguya-Sama: Love is War both are very much full of heart.

Its easy too assume if you like one of these you’ll definitely enjoy the other.