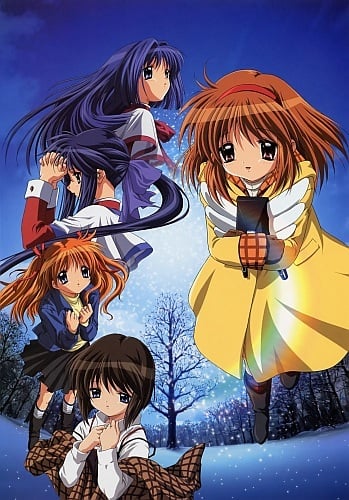 he protagonist regains his consciousness to find himself falling down from the sky. As he realizes that he doesn't know why he's here, even more that he doesn't remember anything at all, three girls flying on brooms appear in front of him. Shortly after as he keeps falling he witnesses a tragic battle between these girls calling themselves Etoile and the monsters they call Zodiac take place. Then he dies... and wakes up in front of a TV, that has "Kamisama" (God) written on it, with a little girl inside. She asks him "Do you want to be reborn?"...

A 16 year old boy, Hiroshi Kuzumi, has recently moved to a town in the mountains. The town is separated into new and old streets by the river, and many mysterious local cultures still remain. Although he is sometimes confused, he enjoys his new life. One person kept her distance from him: class committee member Kushinada Nemura. In their few encounters she gave him a word of advice: "Stay away from the old streets."

Hatate Sota is a high school boy who has an ability to visualize "flags" for future events such as "death flag," "friendship flag," and "romance flag." Despite the flag-viewing ability, he avoids making friends with others due to a trauma he experienced in a ship submergence accident. Four beautiful girls get interested in his strange way of living, and they begin to live with him at the school dorm by force.

Tayutama: Kiss on My Deity

Tayutama Kiss on my Deity centers on Yuuri Mito, a student at the Sousei Academy and the only son of the man who runs the Yachimata shrine.At Yachimata, there is a legend of a deity named Tayutayu-sama who protected the area, but this deity and other so-called “Tayutai” have been lost in time.Mito and his friends discover a relic on the school grounds with mysterious patterns on them.Then, at the opening ceremony of the new school year, an equally mysterious girl named Mashiro appears before Mito.Mashiro is somehow tied to the relic and the legend of Tayutayu-sama…

To cure his persistent virginity, Yuuto Mutsura joins his friend Naota in a trip to Aqua Eden, the "City-by-the-Sea", where brothels are allowed. Before he has a chance to become man, he is separated from his friend and accidentally turned into a vampire! Now forbidden to leave the city and forced to participate in a Public Morals task force with several beauties, how will Yuuto handle this new life?

Makoto has been in love with Kotonoha, a beautiful girl who rides the same train as he, for some time now. Luckily, his classmate Sekai’s nosy personality ensures him an introduction to his crush, and soon the two begin to date. However, Sekai herself also has feelings for Makoto. Will Kotohona and Makoto’s relationship survive in the face of hardships and trials?

Keita Itou--a boy with no special qualities other than superb luck--suddenly receives an acceptance letter from the prestegious all-boys Bell Liberty Academy. There to welcome him are the two most powerful students on campus, the King and Queen of of BL Academy, Niwa and Saionji.Keita works to discover the reasons behind his invitation to such a remarkable school, struggles to find his niche among such brilliant and beautiful young men, and attempts to win the school-wide contest that will grant him his greatest wish! With all the obstacles in his way, including his own self-doubt, will Keita be able to win the competition--and the king's heart?