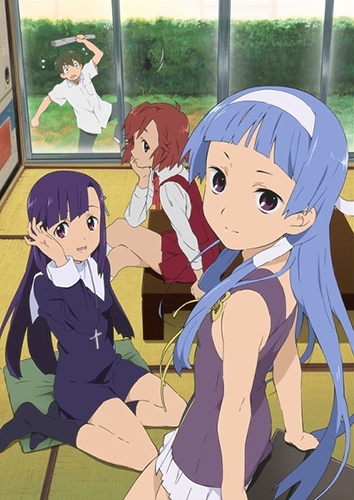 I'd heard about Kannagi thanks to Sankaku Complex. It piqued my interest since it had something to do with Japanese myth and being a big fan of any sort of mythology, I went to go take a look and see.

What I found was a fanservice anime that wins my award for OVERHYPED SERIES OF THE YEAR.

Kannagi is supposedly about a goddess who appears in the human world because a human carved a statue out of the sacred tree. Now she has to live with said human. Think a far shallower version of Aa Megami-sama.

None of the characters are memorable and neither is the plot. As I write this review, I'm scrambling for any Kannagi related memory at all. The entire plot seemed pasted on and the entire thing about Nagi battling these shadow... things seemed to happen just when the writers remembered she had to do these things. if you came looking for a slice of life anime with a sprinkling of supernatural qualities, prepare to be disappointed.

You'll learn more about the characters in the extra karaoke episode than the entire series combined. It's almost as if they hired a different writer than the rest of the series.

Don't recommend this to your friends unless they're raging perverts... or if you don't wanna be friends anymore.

STORY & CHARACTERS
Kannagi is a little deceptive kind of series: it may look like fantasy at first, yet soon it ends up a harem/moe comedy with insignificant fantasy elements, and well, it isn't nearly as good as some people make it out to be:
- first, the major part of the "plot" is taken up by endless dialogues about nothing at the pace of a crippled snail. Perhaps, fans of K-On! and similar series may enjoy that, but I personally consider it to be nothing more than a boring waste of time;
- second, the "story" is essentially a generic harem with your cookie-cutter boy-protagonist who allows a girl to live at his place, and how that girl and two other girls compete for his attention. That's the base, and the authors apparently try to add some other aspects to make the anime more entertaining, yet that eventually turns the "plot" into a total illogical mess. First, it starts as fantasy with the heroine taking on the duty to destroy some shadow creatures because it's supposed to be a purpose of a goddess - to protect the land from the negative energy those creatures are made of; then this mission suddenly gets abandoned, and she starts rivaling another goddess for popularity, making the show a parody on pop-idols; then this plotline also gets abandoned with no conclusion, and the anime shows several comedy fillers; and then out of nowhere it becomes a serious drama. None of those parts are logically connected, and nothing gets solved by the end, as the show has an open ending and no sequel whatsoever. Overall, it looks like those who wrote this "story" tried to appeal to different groups of viewers but totally failed to tie various elements together and make a proper conclusion;
- third, the only good character here is Nagi - the female lead who somewhat reminds me of Holo from Spice & Wolf: she's cute, very likeable and lots of fun to follow. The other characters aren't nearly as interesting and memorable since they are only some shallow anime stereotypes that never develop into anything.
All in all, my experience with this "story" & characters may be described as boredom with occasional sparks of entertainment when Nagi comes into play with her tricks & shenanigans. Basically, she's the main attraction of the show and the only aspect I truly enjoyed about it.

ANIMATION & SOUND
The animation utilizes fitting colour palette and shows nice fluency of motion. In general, it's good but not really something to brag about. As for the sound department, the voice-acting is quite remarkable, especially when it comes to Nagi who sometimes uses archaic Japanese words in her speech: not only it sounds rather amusing, but it also might be interesting to those who study the language. Sadly, the musical score doesn't match the voice-acting: it's bland and absolutely forgettable except for the ending song.

OVERALL
The series might be enjoyable if you're ok with the extremely slow pace and the numerous plot issues it has (in other words: if you don't care whether the anime you watch is exciting and has a logical and conclusive plot). As for me, I personally like the comedy fillers: for example, the episode where Nagi locks herself up in the cupboard is very funny indeed. However, the rest of the show is pretty boring and nonsensical.

Kannagi has its ups and downs. The story iteslef is good, but it feels like so many other harem anime. The childhood friend who loves him secretly, and all these other girls around fall for him as she watches, but never does anything about her feelings. Toward the end the story takes a dive, imo. like they had to come up with something quick to end the series, which is what happens way to much in anime

Contrary to what some may think from reading the synopsis, there is actually less plot involved in Kannagi than you think. While there is a loose underlying theme and storyline, the bulk of the series focuses on comedy and humor, with just a touch of drama added in here and there. This is by no means a negative aspect of Kannagi, as it still finds its niche as your standard comedy flick with characters that you can attach to; they're developed sufficiently, though perhaps not to the extent seen in many drama animes out there. And while there are a few moments in the anime that can mislead the viewer's expectations of what is to come next, namely the beginning, the story eventually balances out and becomes focused mostly on a variety of forms of humor.

On the other hand, Kannagi does feature a bit of dramatic development at the beginning and towards the end of the series, and viewers who latch onto those aspects of the storyline may interpret the anime as a drama with a bunch of comedy filler in-between. It really depends on the viewer's interpretation of the anime as whether it's primarily a comedy or a drama. In my case, I find the anime's blend of the two genres balanced and enjoyable.

This was recommended to me by my 2020 Secret Santa! Thanks a lot if you are reading this!

So Kannagi has some amazing comedy, simular to konosuba, i do have to admit that some of the jokes have aged, but it was around that era that i started watching anime so it was very nostalgic hearing otaku jokes and the like. It make fun at a lot of cliches and it seems to be very aware of what it is doing, almost like a parody of what was a typical slice of life anime those years. I do have to admit that i was surprised at some episode concepts the anime used to make jokes (that in the end fell a bit flat because of its age). The story is in my opinion the worst part of the anime, it seemed like an afterthought, that the director forgot after the second episode that the story even existed, and it had the moments of 'OH YEAH THERE IS A STORY HERE' every 4 episodes, until it reached the last 2 episodes and the director remembered ' oh damm i have to put a conclusion'. The same can be said about its main message, the thing that gave it the drama tag here, it was just an afterthought, like it was burried and overshadowed by its other components. The characters have to be the most enjoyable part of the anime, they are the center of the comedy and the events of everything in the anime are limited withing what the charecters are doing. There are a lot of character troupes used, but its only so the anime can make fun of them later. Overall, it was a very enjoyable show that had my expections very low at the start and surprised with its charm in the middle.