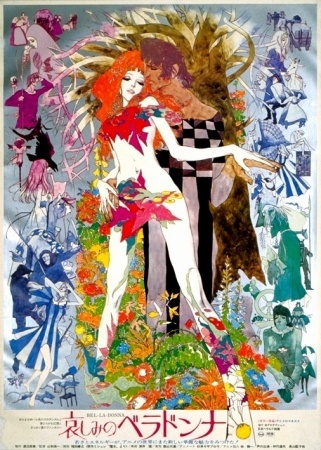 I was very glad to have access to this title recently as it was credited by the director (Ikuhara) of my favourite anime, Revolutionary Girl Utena as the movie that got him interested in working in animation. More recently another title (Gankutsuou) credited its visual style to that of Belladonna. Which just goes to show how impressive it is that the textures and patterns from a surreal anime such as Gankutsuou, was actually first utilised in 1973! Influences alone, let's discuss the visuals of this title. For a 1973 title, it boasts amazing qualities. As mentioned - the textures, patterns, phycadelic colours, morphing are impressive. Much more so when one thinks that all of it is hand drawn and not computer generated, like the titles of nowadays. Considering the difficulty in producing such visuals, one has to really commend the staff on their hard work. The most interesting aspect is that they created an anime that is much more powerful when it is static, and sure many scenes are, this plays like watching a painting - a beautiful and torturous painting. The static images resonate as they are crude, violent and yet incredibly sensual. The fluidity of the style replaces the animation in many ways. Much like a painting, the eye is lead from one scene (or even a line) to another as the carema moves along the image. This title has a strong storybook look and feel which will appeal to some and not others. This did not affect my enjoyment of Belladonna at all, and based on how old this title is, I give it a 10 - it is creative, lush and incredibly well executed for a title from 1973. The voice acting, vocal tracks and background music match the animation in the way they pack a punch. An incredibly great human performance from the cast suits the visuals and the vocal tracks sensuously drive the narrative. The mix of the visuals and vocals in this instance reminds me a lot of the last two episodes of Berserk, much lauded episodes as they take that particular title in a different direction, however the execution of those episodes made them the most artistic horror scenes of 90s anime history. The story, much like those last two episodes of Berserk features creatures that take advantage of human's weaknesses - be it a sexual struggle, one of power, loss or greed. As with the monster of Berserk, the creatures are men, morphed with animals and different creatures; adding to a sense that the creatures are actually very much the dark side of humanity. Giving in to one's dark side is also a driving point of the title, with Jean and Jeanne being tempted to do so on many occasions. Once they make their respective choices, things become more and more allegorical, metaphoric and abstract. The extreme dramatics in the drawing style convey what the characters feel without one needing to utter a single word (an aspect that Ikuhara borrows in his creation of Utena). When the characters do though, it makes them feel very real and as such become well rounded ones. Jeanne is especially well developed, and considering the narrative in play - one cannot blame the script writer to focus on mostly her. Other characters are also developed well, but not to the extent that Jeanne is. While this anime was very enjoyable upon viewing, it is a difficult one to watch repeatedly as the visuals and scenario are so powerful, one needs some time to digest everything that has happened on screen. The subject matter also makes it a hard sell, or even recommendation to a friend. However, it is a worthy addition to my personal collection.