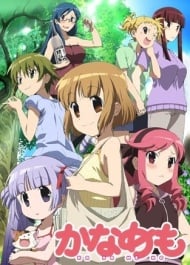 After her grandmother dies, thirteen year-old Kana Nakamachi runs away from home convinced her absent parents will sell her. She tries to find a job, but with nowhere willing to hire a girl of her age without parental consent, she is back at square one. Then, to make matters worse, a young girl called Yume crashes her bicycle into Kana and knocks her unconscious! Following this chance encounter, Kana learns of a job vacancy at the newspaper company that Yume works for and quickly applies. Now Kana has secured herself a live-in job delivering newspapers along with her new co-workers: lively Yume; quiet Yuki; drunken and perverted Haruka; money-hungry Hinata; and grade school deputy manager, Saki. From memorizing her paper route to learning how to ride a bicycle to fixing her terrifying smile, Kana’s new life has only just begun.

StoryFrom the delightful Strawberry Marshmallow and Minami-Ke to the wacky worlds of Azumanga Daioh and Lucky Star, there’s no shortage of cutesy comedies with adorable schoolgirls and little to no plotline. Each new incarnation of this sort of slice of life anime attempts to reinvent the genre, whether saturating the viewer with pop culture references or indulging in bizarre fantasies about detachable pigtails and patriarchal felines. So what fresh offering does Kanamemo bring to the party? Well, other than a newspaper office, not a whole lot. The series centres on Kana, an adorable, shy and naïve middle school student whose grandmother has just died, leaving her all alone in the world. After believing that she was to be sold off with all her gran’s possessions (as any sane human being would suppose), Kana finds herself at the Fuushin Gazette, where she manages to secure a live-in job delivering newspapers. The remainder of Kanamemo’s thirteen episodes documents the young girl’s day-to-day life as she acclimatises to her surroundings. As with every anime in this vein, the presence of adults – parents in particular – is completely ignored. In fact, despite their mention earlier in the first episode, Kana actively denies having a mother and father at all; infuriatingly, this is never explained. Are her relatives dead, living overseas, or just plain incompetent – who knows! Comedy peppers Kanamemo’s plotline throughout, but like most other aspects of the series, the humour is neither groundbreaking nor spectacular. While amusing, most jokes are not enough to evoke a full on belly laugh, though the episode where Kana attempts to smile had me in stitches. The majority of the time however, the show seems to rely on the same running gags, which often wear a little thin. Much like in Strawberry Marshmallow where Miu constantly receives blows to the head and lands face down on the floor, Kanamemo all too often falls back on Haruka’s habit of fondling Kana at every opportunity – much to the young girl’s terror – in order to gain a quick laugh.AnimationKanamemo utilises a vibrant colour palette to reflect the series’ narrative admirably, such as the deep crimsons and calming lilacs forming a spectacular dusk sky at the beginning of the first episode. The cutesy character visuals aren’t out of the ordinary, but they don’t quite feel like stock designs either; each protagonist looks different without being boring or completely unimaginative. Commendable animation complements this pleasing imagery. Movement is not blocky or lazy, and small details such as the swish of Kana’s hair as she moves adds to the environment’s believability.SoundNeither horrifically awful nor outstandingly brilliant, Kanamemo’s opening and ending themes are forgettable. Instead they meld together with the plethora of other fluffy J-Pop songs out there and subsequently, I wouldn’t be able to pick them out of a line-up. Kanamemo’s voice acting is fairly standard, and the characters’ vocals all seem to fit well with their personalities, such as Rie Kugimiya’s performance as Mika/Taiga/Louise/Tsundere X.CharactersKanamemo boasts a variety of entertaining, likeable and ‘wacky’ characters to bounce off against the timid and clumsy Kana. Sadly, the series doesn’t make the best use of its cast and rather than developing the secondary protagonists, or exploring their personalities at all, they remain ignored. Instead of getting to know the quiet and mysterious Yuuki, or the bouncy Yume, the anime places sole focus on their rampant lesbianism. Meanwhile money-hungry Hinata leaves such a faint impression that I actually forgot her name and had to look it up. The series’ two tsunderes fare no better; not only do neither of them receive much exploration, but could someone please explain to me what the hell an elementary school girl is doing running a newspaper?! Despite her lack of growth as a character, Haruka can take credit for the majority of the points that I’ve given this section. Her loli-perv antics provide the majority of the entertainment throughout, though it did get a bit much at times. While I am aware that the series centres on Kana and how she adapts to her new life, I would have liked to see at least some development of Kanamemo’s supporting cast.OverallWhile an entertaining and cute series, Kanamemo is still decidedly average. Maybe it’s because I like this genre and have seen a fair amount of comedic slice of life anime, but Kanamemo seems to take the safest paper route possible; consequently it feels like I’ve seen it before, and that it has been done better previously. Anyone who likes this vein of storytelling will probably enjoy it, though there are similar shows out there, such as Hidamari Sketch or the aforementioned Azumanga Daioh, which, by my reckoning, are far superior.

I picked this up not expecting anything special. Slice of life has never really caught my attention for new shows but i'm happy to say this one was worth the watch. It started off pretty slow and meh like but quickly started to make me giggle joke after joke after gag.There was one episode in particular that i loved.... and this is weird cause i generally dislike singing in anime... yup it was a musical episode. there was nothing special about it but every song sung was hilarious to watch and hear. Pretty hilarious.... LOL The characters were all wild and wacky always helpful to eachother with some added shoujo-ai on the side which proved to be quite interesting and funny. I suggest checking this out if you need to laugh.

Story: Interesting storyline that I've never seen before; a group of teenage girls running a newspaper business that is run by a 5 year old little girl with a fiery temper. Animation: The animation is quite colorful, vivid and beautiful. Sound: Good voice acting, lots of emotion. Nice intro and outro songs too. Characters: All characters have a different and distinct personality that each grow little by little as the anime progresses through it's short 13 episodes. Haruka is definitely funny, in a creepy kind of way. Yuuki and Yume's relationship will have you aww'ing and lol'ing through-out the whole series. Overall: I've always been a fan of slice of life anime and this one is definitely great. The story starts off a bit dramatic and sad, but quickly leads into a light, hysterical storyline based around a news paper business. With a bit of shoujo-ai thrown in for definitely heightened interest, this anime didn't fail to keep me entertained. I wish there were more episodes! 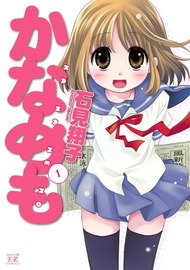