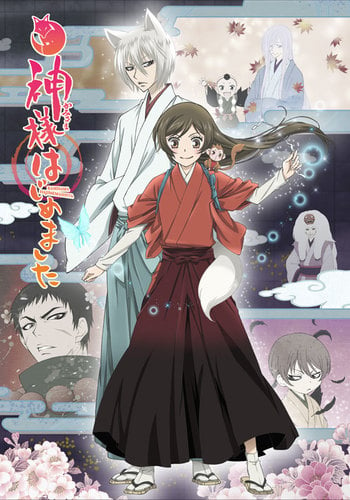 (Sorry for this not being a comprehensive review, but I really have nothing more to say that wasn't said in my review for the first season)

The cuteness and tender, loving relationship between Nanami and Tomoe continues in the most pleasant of ways in the second season. This is eclipsed by the ultra-sweet finale that makes up episode 11 and 12. Once again, Tatum in the English dub gives a phenomenal and believable not-quite-tsundere performance for Tomoe, and Brandon Potter as the newly-established semi-antagonist Kirihito/Akura-Ou provides a fairly pleasing, if somewhat monotonous rolling gravel for a demon.

My only wish is that there will be a third season, as the establishmentand introductin of Akura-Ou's goal to retrieve his body from the netherworld was not concluded, obviously. It is reasonable to do this, as the final arc ends on a sweet and pleasing book end that, if Kamisama Season III never surfaces, still encourages people to continue the manga (the spot leaving off Episode 12 being chapter 64, or thereabouts).

Again, thoroughly entertained by this season and Tomoe and Nanami's close and genuinely multi-faceted relationship. Man, it's been awhile since I've had the warm fuzzies such like this!

if you loved the first season you are going to love the second ! BEAUTIFUL. No more words, it's beautiful n.n

Okay, so if you are expecting season 2 to have lots of development in terms of the love story then you may be dissapointed. As in season 1, the devlopment of Nanami and Tomoe's relationship makes some progress, but not much. Tomoe still takes forever to admit his true feelings, but at least he finally does. The problem with Kamisama Hajimemashita it that both seasons are way too short. You feel like you only get to spend one or two episodes with a new character because there are only 12-13 episodes in both seasons. I do not feel like the shortness of the series allows you to feel satisfied. Hopefully there will be a season 3, because season two ends on a cliff hanger, even more so than the first season.

However, with the negativity aside it is still a great series. It is probably one of the most adorable animes out there right now. The music, mixed with the characters adds such a delightful atmosphere throughout each epsiode. If you liked Fruits Basket, you will like this show becasue the director is the same. I loved Fruits Basket and can see the similarties thoguhout both shows. Overall a really sweet series with moments that may make you laugh out loud or even just smile. I only wish it was longer!

It was so cute and I absolutely loved the store and character. The story has not progressed much which I hope leave an opportunity for a 3 season. Overall it was amazing and I do not see why more dont recommend this anime.  It was Beautiful.

I very much enjoyed this anime! I loved the concept and the characters. I loved it so much that this became the first manga I ended up reading as I was very curious who the story will develop beyond the two seasons of the anime. The manga is still going but the story is very good. It felt somewhere in between Inuyasha and Fruits Basket. I give this anime a 10 and recommend the anime and manga to anyone without a doubt!