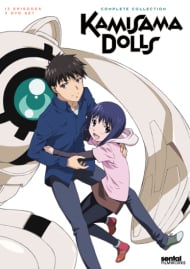 When Kyohei moves to Tokyo, he thinks he’s left his old life behind. But when he discovers a bloody corpse, he also discovers that the past isn’t easily left behind, especially when the past is as unusual as Kyohei’s. You see, back in his home town, Kyohei was a “seki,”an individual able to control “kakashi,” ancient wooden “gods” capable of incredible feats, with his mind. Now there’s a kakashi loose in Tokyo, and it just may be up to Kyohei to stop it AND its seki in Kamisama Dolls!

What I Liked: The Kakashi designs and sound effects, as well as the in-plot reasoning behind their creation. Fight choreography isn't bad and is usually engaging. The soundtrack, and Chiaki Ishikawa's contributions. Animation is passable for the most part. What I Didn't: Episode 7. Miss Senou. The characters feel completely undermined by their own emotions, and the series spends a lot of time jumping between frivilous comedy and dramatic moments. The series feels overencumbered by all its subplots that offer no real interest or much connection to the main plot. Hibino's treated as something for the main character to fawn over and not a character. The puppet previews are some of the most jarring preview sequences I've ever seen. Mahiru, and the absolute drudgery that was the final quarter. The ending was a sequel-baiting mess. Final Verdict: Much like the warbling of the show's brilliantly-designed Kakashi, Kamisama Dolls spends a lot of time being nonchalantly unclear about the elements that matter. Characterisation is limited to simplistic backstories in an attempt to justify emotional outbursts, there's no clear central theme or message and it just generally feels messy. Not even the ending offers respite here, throwing away any potential this show might have had.

This was originally a blog post found on my blog, Moe Monster. 神様ドォルズ, Kamisama Dolls I’ve just danced my last samba to the opening of Kamisama Dolls. As the saying goes, all mediocre things must come to an end–or at the very least, “To be next story.” Like other finales, some thoughts on the final episode before thoughts relating to the series. Hi friends. Welcome to Kamisama Dolls, the show with incredibly conflicting moments. One minute there’ll be a cute little girl breaking dishes and in the next minute there’ll be a dozen bloody bodies strewn across the floor. Over thirteen episodes, the large cast of characters are fairly well-developed, but for no apparent reason as nothing happens. Nor is there any real conclusion to the show. In E03 I finally got to see Utao wait tables.There is a main storyline. Kyouhei Kuga leaves his village for the big city to escape his past. A past riddled with supernatural stuff, which he had somehow been a part of. That sounds pretty good, right? Also there’s the antagonist, Aki, also introduced in the first episode. He’s also from the village, an escaped convict and apparent psychopath. He has some sort of history with Kyouhei and most strikingly, controls a supernatural based robot thing. That sounds even more interesting, right? Well I sure thought so. However over the course of the 13 episodes the show seems to try its hardest to ignore these two main characters and their story. Nothing wrong with the show’s animation, music or any production values. The show had a slightly retro look and feel, even down to the muted colors. The opening song, while certainly catchy and Brazilian, confused me on a weekly basis. They could have done something more befitting a Japanese folk-song, similar to the sounds the robots or kakashi make throughout the show. The main kakashi, Kukuri. Again, it’s the story and the execution that’s the problem in my mind. Regardless of the source material, if the anime had stayed with the main thread of Aki, Kyouhei & Utao, and the conflict of village vs. city, the show could have been 100 times better. The introduction of all the other robot users, or Seki, took mounds of time away from the more important characters. I actually enjoyed many of the characters, but there wasn’t that much of a need for them to ever be there. Moyako is a good example. A girl from the village, who is from the family of kakashi repairmen, is a nice level-headed character with a couple nice moments, but unfortunately, she’s not very important to the story. Many of these characters were well-written, but out-of-place overall and ended up sucking the life out of the story. Koshirio, Kirio, Moyako--Glorified extras. In addition to character-overkill, the other problem I had with the show, were all the holes in the plot. Or perhaps, lack of common sense to the plot.  Without naming specific incidents, it always felt like they were making up some of the story as they went along, while paying very little attention to the things that had happened previously. For example a character will tell others, that they can’t do A, because B will happen, and B is bad. But A happens over and over without B. The biggest hole, in my mind (I can name it specifically, because I already have), is that no one tries to catch the person we’re told is the reason why we even know the characters we’re being introduced to on a weekly basis show after show! Believe me, there’s a reason that sentence doesn’t make any sense! Lighter fan service moments shown in Kamisama Dolls. I have to be honest and say that I wouldn’t recommend Kamisama Dolls. There’s probably a blu-ray coming out with additional material, but the 13 episodes were so-so at best. The show has comedy, action, supernatural things, robots, fan-service, some horror, giants boobs–pretty much everything. But it doesn’t do anything very well, except maybe giant boobs. I enjoyed some of the characters and lighter moments, but that was about it. The show had a great premise, and even after a few episodes, I felt like this series could have turned out swell. Along that line of thought, even if the show sounds (reads I guess more accurate) good to you, think twice about watching this. The other “non-rating” theme that’s sort of evolved in these posts, is the “Did I ever, at any time watching this, want to drop it” scale. The answer to this, is yes. There were a couple of moments where I almost stopped watching. Without specifics, one such moment was a flashback episode about halfway through the series, and it’s god-awful. Seriously, as heavy as the back story (the entire reason for the series) seemed like it would be, it’s really just a jumbled coincidental mess. Overall, not the worst show I’ve ever seen, or even seen this Summer 2011 season, but forgettable nonetheless. Thanks for the support! 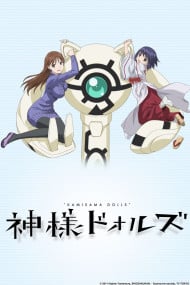 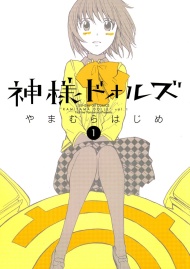