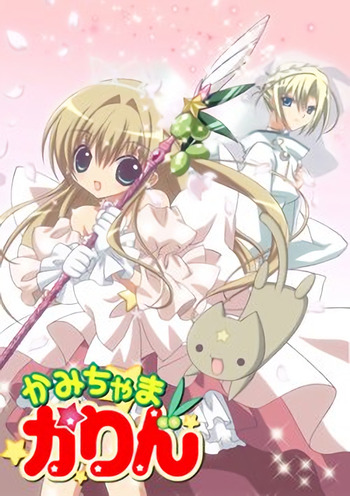 i wasnt to sure when i first started this series if I'd like it, but once the story really started to unfold i couldnt stop watching it! the characters are cute, funny and fit the story well. the the story gets really good as it goes on in my opinion, i really like the unexpected turns. i would defenitly recommend this anime to my friends. (and i will) the best things (in my opinion) about this anime is the comedy, the characters, the cute romance, and unexpected story plot. 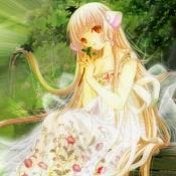 Kamichama Karin initially caught my interest because I thought that the ability to turn into a goddess would be an interesting concept.  Unfortunately, this is not the case.  The powers have nothing to do with the god they are meant to represent - unless of course there happens to be a second god named Athena unknown to me who is the god of frilly pink dresses and random zotage from wands.  However I still found the series entertaining and felt it was worth watching.

One of the things I liked most about the series was its mischievous sense of humor.  For  example, the heroine Karin is looking forward to a certain event with a boy, but ends up spending most of her time frantically running away from said boy due to a tactical error on her part.  This includes lying face down in a goldfish pool.  Another example, is when she and the main hero of the story are stuck together and have to deal with the various issues that arise from this incident (like which locker room to use).  Circumstances also often lead the main antagonist to the completely wrong humorous conclusion.   I wouldn’t rate the comedy as a masterpiece and some may find it stupid rather than funny, but I personally found it enjoyable to watch.

The story seemed fairly standard for a magical girl series.  The series starts with a ‘flash forward’ type scene that I feel they should have just left out because it is more confusing than anything else.  I thought the ending rather weak as well with it being hard to follow.  Fortunately, from the end of the flash forward to the climactic battle was decent without being ‘brilliant’.  There are  also some strange aspects in terms of time that are never fully explained.  It feels like the creators intended to have more seasons than were actually made.

One thing that definitely was a plus was the fact that the battles are more varied than most magical girl shows.   There is no ‘monster of the week’ concept and the powers are more difficult to use and control.  In more than one case the main antagonist is sent fleeing without anyone firing shot and some episodes have no battle at all.  There are also some unexpected twists and turns in the plot that keep things interesting.

Like many other magical girl stories, comedy often wins over realism or depth of character.  For example, the villains are sometimes ‘dumber than dirt’.  I did feel the interrelationships between the various characters to be more complex than most series which kept me interested.  The story also has a fair share of romance in it and definitely makes one wonder how everything will turn out.

I also like the fact the story has the rare and elusive ‘magical boy’.  The main hero also has the power of a god (Apollo, god of odd white outfits and more random zotage) and does more than throw the occasional flower from the sidelines.

Unless the animation is very good or very bad, I generally won’t notice it.  This series mostly falls into this middle ground.  I generally liked the look of the characters, and thought some of the effects to be interesting so I am giving it an eight.

The sound was acceptable without being brilliant or stirring.  The battles felt a bit blander than it could have been because of this.  The voice acting seemed decent for the most part, though Himeka had a very unusual way of speaking that some might find annoying.  It made her sound very young.  Neither the starting or ending song were gripping so I tended to skip over them.

I am giving it an 8 mostly because it was more varied than other series and because I enjoyed the humor.  I would say that if one liked the humor in other magical girl stories then you will probably like this. On the other hand if you dislike characters acting stupid purely for the humor value, then you likely will find it dumb. Even the battles, except perhaps for the final showdown, were more comic than dramatic.  I also liked the twists and turns and odd side elements of the series despite the fact they are never fully explained.

Do they really sell eel ice-cream in Japan?  I remain dubious.

i really enjoyed this series, fun characters, great plot line, and a really BIG twist. i didnt understand the begging of the first episode?? it doesnt match up to me but i just forget about it. i thought the ending was going to be awesome but im really fustrated beause it doesnt tell us what happened to him, it just says he dissapeard :(. overall i think the plotline was amazing and i was happy with this series