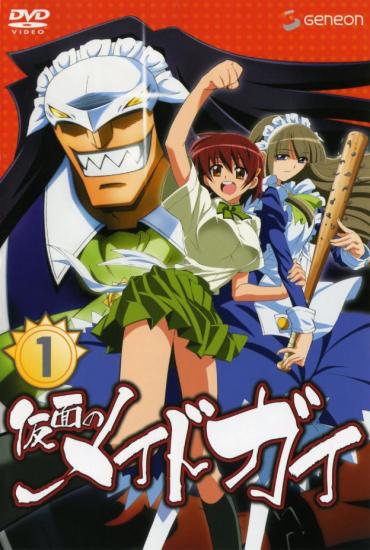 The ongoing hunt for good ecchi brought me to the doorstep of Kamen no Maid Guy – an anime with a scary looking promotional poster, and a lack of well known subbing groups picking up the title. It didn’t look promising, and the absence of recommendations from other perverts made starting the show a little daunting. But as ever, the odyssey of panty-shots takes president, and so I fired up the first episode with the hopes of finding a hidden gem.

Straight away, the show gives the impressions of a plagiarised mishmash of Bamboo Blade, He is my Master and Hayate the Combat Butler. Although this feeling remains, Kamen no Maid Guy certainly finds its own (crazy) little anime niche and runs with it throughout the entire twelve episodes. Interspersed amongst the plethora of panty shots and boatloads of boobs, there is a genuinely likable comedy. Relying mainly on innuendo and in-your-face perversion, the series dares to go a step further and slap the viewer around the face with a satirical trout at the most unexpected moments ensuing in plenty of nose snorting and even outright guffawing.

Perhaps more surprising than the inventive bullying techniques regarding Naeka's cup size, is that the laughter remains strong throughout. The number of side characters and constantly switching focus between them keeps a fresh feel and allows the writers to be extremely creative with each perverted situations. How many series can boast a kendo tournament where the loser strips to the delight of her peers? Or a demon teacher who merely has to look at a girl to have her fall completely in love with him and do his every bidding? The butch man dressed as a maid is not the only randomly bizarre part of the show, but this is one of the rare cases in which spastic comedy works extremely well.

As per the norm with ecchi shows, Kamen no Maid Guy's animation is relatively simplistic with a special focus on the female form. Various breast shapes and sizes are drawn with loving care and attention whilst retaining a natural resistance to gravity. The characters also exhibit quirky facial features – girls sport large, innocent eyes and fashionable hair styles, whilst the boys are stock designed bishounen. Well, apart from Kogarashi, and his cross dressing, mask wearing strangeness.

The first thing to strike me (metaphorically speaking) was the “boing” sound effect that accompanies Naeka’s movements. In the same vein as the rest of the series, it is completely over the top and utterly hilarious. Incidental music is comical, and wouldn’t feel out of place in a Bugs Bunny romp. Ranging from a country-style guitar twang, to a mischievous ditty that accompanies Kogarashi’s explanation of his super maid techniques, the tunes are off the wall and fit Kamen no Maid Guy's insanity perfectly. Also deserving of great praise, the OP and ED rock and have some amusing visuals to accompany them. The voice acting is certainly befitting of the show, however the constant screams of “nooooo!!” as Naeka’s breasts are under threat of being exposed can start to grate...

The characters, although not the show's greatest strength, are what keep the humour flowing so easily. Naeka will earn the viewers sympathy as she repeatedly finds herself (and her mammary mountains) as the butt of every joke. Frequently playing the tsundere, her actions are completely understandable, although maybe I can empathise because I’m also female...

Kogarashi remains a mystery throughout the series, and not just because of his apron wearing fetish; using his maid powers to protect his goshujin-sama, he seems to cause more problems for Naeka than solving them, usually involving her underwear in some shape or form. Fubuki is a more typical servant taken on to protect the family, and is also useful when it comes to keeping the Maid Guy in check. Very handy with a nail studded baseball bat, she is often caught up in some bizarre plots that see her stripped down to virtually nothing. Don’t expect any deep character development, as there is none. Instead, laugh along with some very amicable and diverse personalities that fit the insane show perfectly.

The rest of the side cast are massively stereotyped, but this is definitely a bonus in a parody driven show. From the pettanko loli to the glittering bishounen teacher that has females falling at his feet, each adds a new spin to the varying, yet hilarious, despair of Naeka.

I know this will not appeal to ecchi-haters, as it does feature girls being exploited for their “female protrusions” and underwear shots. However, those that revel in perversion will love the varied cup sizes, hilarious jokes and utter depravity used to make the viewer smile. Probably about as far from intelligent viewing as you can get, Kamen no Maid Guy is a great show to waste a day with when you’re ready to kick back and relax without thinking. Just be prepared for questioning looks from passersby as the cow-titted girl's breasts steal the focus of each show... I know I certainly got some!

Naeko & Kousuke are the rich kids assigned "maid agents" who cook, clean, and protect the siblings who are under threat before they receive a grand inheritence. While the overaching story is typically non-sensicle the humour, much of it boobs-based, is hilarious. The characters are great particularly Maid-Guy with many special moves and imappropriate investigations into the life of his young female charge. I really liked the fun of this anime and think it succeeds in all it's ambitions.