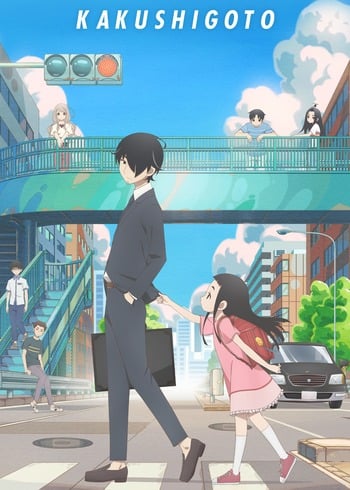 I had seen this anime on Funimation and was curious on how this anime would play out. I really love it so far especially when he gets all depressed or worried if his daughter were to find out what he truly does for a living.

Awww man folks....we have been really treated spoilt to another father-daughter anime this year. The relationship between Goto and Hime was absolutely precious like the pair of them just melt your heart into pieces!

This anime and Somali & the Spirit Forest have been definitely giving me lots of onions in terms of what goes on behind the scenes of Goto's secret in attempting to hide his job from his daughter. It even gives us a sense of reality to what an mangaka does for a living. The lighthearted comedy makes you laugh but at the same time, there's always confusing depressing scenes to the future at the end of each episode. As a viewer, you really wouldn't have a clue on what's going on with Goto and Hime.

I'm not gonna bother telling you lot to what happened because this anime is so so worth everyone's time whether they hate slice of life stuff or not.

I thoroughly enjoyed this anime, it was emotional, funny and just heartwarming. Now if you'll excuse me, I'm going to cry in the corner because of the ending.😭

I really enjoyed watching Sayonara, Zetsubou-Sensei but the show had moments where it went a little too deep in Japanese culture, resulting in jokes that I just couldn't relate to. A lot of it was still fun and goofy but I always wished that there was a bit more focus on the cast, the characters had tons of personality but it was obvious that they didn't always suit the narrative.

Kakushigoto and Sayonara, Zetsubou-Sensei have a lot in common, they're by the same author with a very similar art direction, but there is a lot more focus on the cast compared to Sayonara, Zetsubou-Sensei. Instead of everybody's fav teacher, mr. Despair, we follow the story of a father who raises his daughter by himself but feels ashamed to tell her what type of work he does. It creates a lot of awkward situations and a lot of misunderstandings.

The jokes don't always land, the main story that they're building up to will leave a lot of people scratching their head but there is a certain charm to the show that a lot of people will appreciate.

There’s something that’s just slightly off with Kakushigoto for me, even if it’s a comedy series I’m supposed to like. Its main ingredients – the story, the characters, the balance between its comedic and heartfelt moments – are solid and they all go well with each other. But the series, as a whole, just wasn’t clicking with me, so even if there were slightly more comedic hits than misses, I would still always end up waiting for it to kick into some higher gear.

Its entire premise is built around a mangaka father trying to keep his dirty gag manga a secret from his precious daughter, so you know that something’s got to give at some point. It’s a gag that can only be taken so far, so that’s what this show does. It takes the joke as far as it can – at first, in little bits and teasers scattered throughout its first eleven episodes, until finally bursting into one huge dramafest in the finale.

I guess you could say this was the higher gear the show was building itself up to, but it gets to a point where you start getting tired of the jokes themselves, which were mostly just variations on a theme. The theme, of course, being: working as a mangaka is disgraceful, let’s make sure my precious daughter never finds out, please? So from there, you already know that you’re in for a series of self-deprecating gags about the manga industry, self-deprecating gags about being a single dad, self-deprecating gags about working as an artist in general, and so on. To make it worse, the jokes are mostly one-off and don’t really escalate, so while this means the show doesn’t flatline, it doesn’t soar, either.

Kakushigoto, in the end, was just fairly average, which only makes the soap opera-worthy ending a little too much. You know it’s the father-daughter relationship that gives the story its core, but once the heavy drama starts to hit, you’ll get the sense that it’s here the show’s begun to overcompensate. Maybe it’s not as obvious and maybe it wasn’t done consciously, but you do get the feeling that it tries a little too hard to become something more than a gag series.

Imma just be breif. So anyway, this series for me was really wholesome and heart-warming. It's a really nice anime about a father-daughter relationship. The relashionship between Goto and Hime was literially so precious.

Basically its a show about a mangaka who wants to hide his job from his daughter. It's a light, slice-of-life comedy anime that can make you laugh, but it also has some of them fEeLs at the end of each episode and at the end of the series.

This is definetly worth your time even if you don't enjoy slice-of-life or comedy (but seriously who doesnt enjoy comedy and the slice-of-life part is so fRiCkIn CuTe).

I'm not gonna spoil anything so go watch it!

Now imma join mah fellow friends in crying in the corner because of the ending.