Alt title: A Clerk in Charge 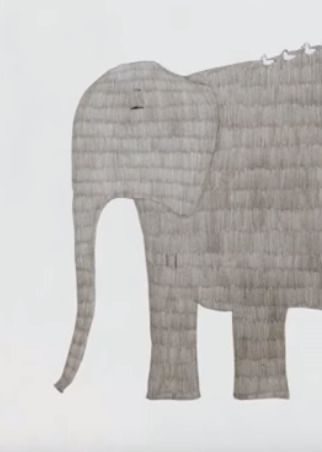 In a pig’s eye

The everyday adventures of an extremely odd family. Dad sleeps covered in meat slices, Grandpa jumps out of windows and the six identical children love to steal Mom's lipstick and leap off the roof. When a giant pig randomly shows up at their house one day, can things really get any stranger than it is already?

Animals takes center stage in both.

A pig in In a pig’s eye, and an elephant in Kakari

Both have a similar animation style and a nonsensical / nonresistant story. Humans pester the animal and the creature stands or sleeps through the torment. Really not much happens in both.

A deeper meaning can be interpreted but you'r better off not thinking about it. Despite the childlike nature the snapshots the content is not child freindly.

Chestnuts, bees, and a mortar join forces to punish a villainous monkey.

A fox steal the world's most valuable diamond and buries it under a tree, believing it to be well-hidden. The next day, a circus arrives and sets up its tent next to the tree, its animals unwittingly digging up the diamond they believe to be just a worthless rock. They soon lose the diamond inside the circus and the desperate fox attempts to retrieve the stolen diamond before the other animals realise what they have.

Spring has come and the animals are coming out of hibernation. The rabbits play jump rope, while the polar bear and the raccoon dog play leapfrog. The frog and the monkey race on a car and a bicycle. School has started...

The animals helped each other and solved each problems.

In spring, the fox is busy partying. On the other hand, the diligent raccoon dog family works hard in the fields even in the hot summer and are ready for the fall harvest. The fox makes fun of the raccoon dog family sweating as they carry their crops and steals a rabbit’s food in front of the raccoon dogs. When cold winter comes, the raccoon dog family enjoy themselves around a fire, but the fox wanders in the snow searching for food. The fox works out a plan to rob the raccoon dogs of the stock of food in their warehouse by starting a phantom fire. The fox changes into the shape of a truck and gets away with the food, but a raccoon dog turns into a sleigh and chases it. A battle of transformation between the fox and raccoon dogs starts in the air. One raccoon dog, reduced to one wing is facing a tough fight, but his family helps him with an anti-aircraft gun and finally fights off the fox.