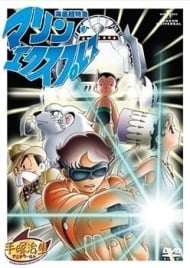 The Marine Express is an underwater, trans-continental train that is about to embark on its maiden voyage to Tokyo - but trouble is afoot! Aboard the train is the murderer of its creator, and private detective Ban Shunsaku is determined to track down the killer before he harms anyone else. Also aboard are the infamous Black Jack (who'd like nothing more than for Ban to pay him the five million yen he owes for services), Adam the robot, and other heroes and villains. Each has a motive for traveling the Marine Express, and each may not come out alive!

706 users are tracking this. Log in to see stats.

StoryThough I had Marine Express at my disposal for several years, I kept finding it difficult to get past the first thirty seconds of the disco-inspired, cheesy as hell opening track. Luckily, I finally found the determination to move forward and subsequently realized that Marine Express – save for the last thirty minutes – is an engaging, action-packed thriller that even newer anime fans can enjoy. Created by Osamu Tezuka, the 'God of Manga' himself, Marine Express is a crossover anime with an interesting premise: an underwater train is embarking on its maiden voyage, and plenty of people onboard would love nothing more than to destroy it. Private gumshoe Ban Shunsaku is aboard looking for a killer; he’s accompanied by the legendary doctor Black Jack and is introduced to a number of classic Tezuka characters along the way. Each person has her or her own motive for being aboard the train, and ultimately all of their lives are in danger! While something seems familiar in the premise, it still manages to be enthralling with harrowing near-misses, plenty of action and a mystery you can't wait to solve. That being said, had the story stuck to the initial premise, I would have rated this section higher. However, the latter 30 minutes of the movie randomly degenerate into a bizarre, scientifically-unexplained tangent that takes you to a fantasy world and beyond; it feels forced, random, and ultimately strongly takes away from Marine Express’s enjoyment. Add to that an unappealing climax and the film's enjoyability degrades dramatically.AnimationWhile you can't fault Marine Express for being made in 1979, its animation is still heavily dated. Whether you're eyeballing the deep water sharks or noticing a rudimentary smattering of lines when a character exits a hospital bed, it's painfully apparent that you’re watching a title from decades ago. However, as long as you aren’t the sort of person who casts aside anything pre 2000s, the anime's visuals won’t distract you too much. Characters are designed in typical Tezuka style, with freakishly-shaped bodies (including massively disproportional noses), doe-like eyes, and an overall crude and simplistic level of detail. Like it or not, they're trademark Tezuka.SoundYeah, I know it was made in the late 70s and the disco era – but could you have please changed it up a bit, Tezuka? The outrageously-campy disco title track permeated far too many scenes of the movie, and additional tracks still overused a few stereotypical disco sounds and melodies. This type of music might be appropriate in small doses or in certain types of films, but hearing nonstop disco during action-packed, thrilling moments just didn't do it for me.CharactersIf you're wanting classic Tezuka nostalgia, look no further than the characters of Marine Express. Black Jack is as deadpan and money-driven as ever, Astro is as confused as always about his humanity, and the rest of the trademark characters fit their roles perfectly. Besides that, little can be said about the others; the villains are generic bad guys, the "additional" characters added at the end are textbook and boring, and you don’t come to feel attached to anyone in particular.OverallIf you're a Tezuka fan, Marine Express is a must see. In addition, anime fans who haven’t gone to the dark side of animation snobbery might also appreciate the engaging, thrilling story that Marine Express brings to the table. However, if would benefit all viewers to hit "stop" as soon as the story shifts dramatically. Had the last third not happened I would have rated the film a solid 7; otherwise, I must give a fair and acceptable 6.