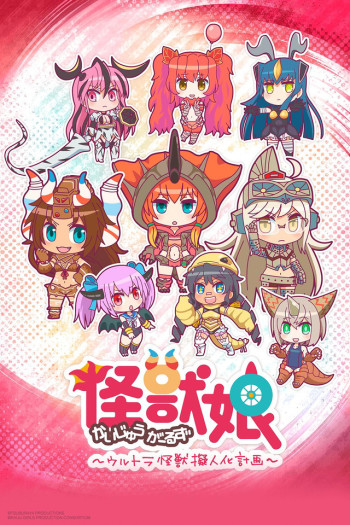 *Below the full review is the one I wrote while the show was airing. I plan to leave up all my partial reviews so I and others can see how opinions changed or stayed the same and because the history student in me does not deal well with the impermanence of the internet. Paper trails (or their equivalent) should be kept.*

I knew from the title this was an anime I could not pass up. I’ve long loved Godzilla movies and I’ve been fortunate to be introduced to Gamera recently. So young girls inheriting “kaiju souls” that cause them to transform into these monsters was a premise I had to see in action.

The show focuses on three girls introduced to the fact that they have these kaiju souls within them. Aki, the main character we follow, has inherited Agira. She’s laid back and seems to be the one bothered by the situation the longest. Miku is the energetic character. She’s quick to act and it is no surprise she’s the first to bring forth her kaiju, Miclas. Lastly is Reika. While at first appearing as a typical smart, glasses-wearing girl, later in the season you learn she’s a huge otaku for a sports manga with two cute male leads. Her kaiju is Windom. Other Kaiju girls are there but these are the focus of the show.

The first few episodes are the basic set up for the show’s setting, characters, and how the company GIRLS works. Each girl is giving a cell phone, a Soulrizer, that allows them to transform safely rather then become out of control. Later the three travel to different places to aid full members while they prepare for their exams. But are Kaiju Girls really there simply to hand out flyers, other simple things , and fight each other in mock battles, or is there more than Aki, Miku, and Reika know?

I still say this is one of the best short anime I’ve ever seen. You never feel like the episode is pressed for time and things are built on while each episode can mostly stand alone. It may be one of the best paced anime because of this. The animation is still something I think fits well with the show. The chibi designs lend themselves to the comedy focus of the series and it makes the transformation sequences done as regular anime girls even more exciting when they show up. I do have to disagree with myself that it is forgettable. Once you get past the three girls’ first transformations, other characters appear more often and the plot picks up. Humor is a major part but there is some real character growth and the last few episodes introduce some really interesting ideas.

A show that is great to binge in one sitting or spread out to offset a more dramatic or sad anime, Kaiju Girls is a fun watch I highly recommend. I just found out that this has a second season airing right now (early March 2018). I’m out of here to start binging now…

*Warning: rating and review are only based on the first two episodes. Will be updated after finishing this anime.*

The moment I heard the title of this anime, I knew I would be watching it. I've always loved Kaijuu movies (Godzilla and Gamora being the two major ones) and so while I'm not really a fan of cute girls doing cute things, I could not pass this up.

The premise is that some young girls inherit a "kaijuu soul" leading them to feel like roaring or other manifestations of their emotions. They are invited to GIRLS, a company that provides them with a cell phone like device that helps them transform into their respective monsters.

It was better than I hoped. I'll admit, I didn't get my hopes high but it really exceeded them. It's one of those sadly few anime shorts I've seen that not only fit the time slot but makes best use of it. This show would not work in long episode form. It would drag along, the parts that should stand out would be lost in meaningless additions, and the humor wouldn't work.

The characters are mostly the typical types of cute girls you expect in shows like this but they work well together and the voice actors do a good job with them. The animation is also nothing spectacular but works well for the show and I felt added to it. I don't think I would like the show nearly as much in another form of animation.

The show is episodic with the audience learning a little more with each episode and several of the settings repeating in what is obviously a format the show will follow. (The girls do something, go to break room and sit a the same table, and then we see or move to another setting.) I can, however, see this as a rather forgettable show. The premise and the characters stand out more than anything that actually happens other than when they actually transform into the kaijuu.

One of the better short anime I've seen, I recommend this for that short and funny show you watch after one of the more drama filled series has you needing something mild.

I only made it through episode 6 but this series really isn't bad. It's just not very good either. The characters are likable enough but not really memorable in any particular way. The animation actually works well for the feel that the anime is going for but the switch to a more realistic art style for magical girl style transformations honestly seems a bit out of place and weird. The story is about what you'd expect from a show with 5 minute episodes focusing on it's "cute" factor as the main thing drawing an audience but it still just doesn't do anything to impress. Again, this show isn't bad, it's just really not good either. After 6 episodes I quit watching not because I didn't like what I was seeing, but rather because I was just sort of bored. I imagine that tomorrow I probably won't even be able to remember the details of what I watched because it was that lackluster and forgettable.