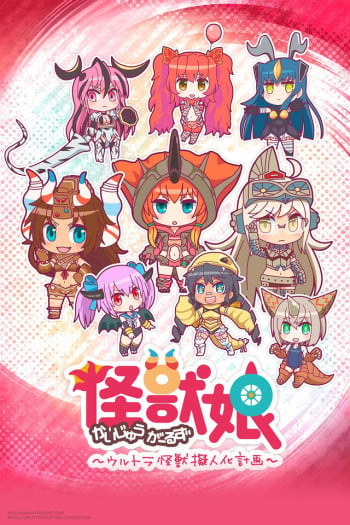 Three girls meet for the first time at the start of a new semester in a brand new school. But these aren’t just any girls, and this isn’t just any school! Dreamcast, Sega Saturn, and Mega Drive might be the names of SEGA gaming consoles, but at Sehagaga Academy, they’re also three girls destined for greatness! Or at least a nostalgia trip. Wacky hijinks ensue when the girls are tested not on their math and science skills, but on their ability to complete challenges inside (literally!) classic SEGA video games. Can they fight their way through the blocky polygons of Virtua Fighter? Can their dance moves get them high enough ratings in Space Channel 5?

Both of these anime are about chibi girls learning to use their new skills in various scenarios. Both anime have some hint of nostalgia, either for old monster movies or old video games. The girls are named after either a kaijuu or a game console and their outfits match. If you liked one, try out the other. They might be vastly different in origin, but they follow pretty similar veins of thought.

At the Nerima Ward Ooizumi Academy Photonic District, the Robot Girls are selling "Photonic Energy', a new type of "cheap and green power." The lab's research has been going nowhere and their government funding's been cut off, so their finances are a mess. Just when the three robot girls are bored out of their minds, the part-timers they hired arrive. They are Garada-K7, with her long pigtails, and Doublas-M2, who only speaks with the two hand-puppets she wears. But they soon realize that the two have come to stop them from selling Photonic Energy, and a battle begins.

Both of these anime are about magical girls who pay homage to older Japanese entertainment. Whether they use the armor of mecha or the powers of kaiji, these girls have fun fighting to protect the city. If you like one, try the other and see how many references you recognize.