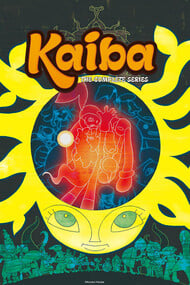 Welcome to a world in which memories can be transferred from body to body; old painful memories can be removed and replaced with new ones, and the poor sell their bodies to the rich to survive. Waking up one day, Kaiba finds himself in a strange place with no memories of his past and a mysterious hole in his chest; the only clue as to his identity is a locket with a picture of a girl hanging from his neck. Armed with this token, Kaiba must now travel across the galaxy to discover who he is and what the girl in the locket means to him; however, his journey will bring him into contact with many people whose lives have been tragically affected by the manipulation of memories. All too soon it becomes clear that something is very wrong with this world…

Studio Madhouse proved once again why it is the king of anime series, with the most awesome director of our times, Yuasa Masaaki, blessing the medium with some of the most exceptional and artsy anime there are, that have nothing to do with fan service or flower symbolism. Although I constantly nag about pretty colors not being that important, having an unusual artwork helps to make a series stand out from the lot. This counts double for a setting that has absolutely nothing to do with high schools, contemporary Japan or Earth as we know it. When the setting is mundane it becomes an unnecessary visual alienation to not use a typical artstyle. In Kaiba, looking bizarre makes it easier to understand how different this world is from ours. At the same time it is not completely different from everything else in the history of animation to the point it’s un-relatable for everyone. It’s somewhat familiar with Osamu Tezuka’s artstyle, somewhat like the Smurfs, or like The Petite Prince. It’s a tribute to retro aesthetics which for a retrofan like myself, it makes it more enjoyable.It appears to be for kids at first glance, which is deceptive as it’s full of nude, bloodshed, eerie monsters and stuff that will probably sent the poor toddlers to the shrink. Everything about it is an allegory, a look into the dark corners of the mind, and deals with all the usual existentialism topics of science fiction, from the meaning of life to finding your identity in a universe where memory is another commodity. It’s essentially like Ghost in the Shell only without the need for super detailed machinery and realistically looking characters. It’s a case of less is more, where minimalism in details makes it easier to convey its message without the need for a thousand polygons moving mechanically on screen. And then it’s the music. The opening theme is fantastic. Nothing that resembles generic jpop nonsense and it’s highly memorable. The dialogues are also not wasting your time with aimless bickering, as they are very focused on how the character feel or what is going on with the plot, and are often supplemented by a visual representation of what they are taking about. The plot is non-linear and has a great sense of mystery, as you are thrown in the setting without knowing what is going on or who everybody is. Instead of going for a lazy infodump, the answers are given gradually over several episodes, which means you are always learning something new instead of feeling you are wasting your time in what appears to be an episodic series at first. It also doesn’t overstay its welcome, since it lasts a dozen episodes in the span of which it includes more character development and world building than your average anime that can’t achieve it with even a 100 times more duration. It is not perfect though, as not everything is explained at the end. We never get any clear answers for what caused the amnesia of the protagonist, or from where did that memory eating plant came from. I had to make up a head canon where the latter attacked the former in the beginning of the story, otherwise the ending wouldn’t make any sense. And I have to point out how minor characters were far too eager to describe the story of their life a minute after they met the protagonist because they only appear for one episode and there is no time to spend on slowly getting to know them better. Despite the hiccups, it’s a fantastic short series. It is not for a mainstream audience, as most are not going to appreciate it for not being easily digestible. It still achieves way more than most anime with its explored theme that does not stop at the premise, and an artstyle that will never be confused with the cookie cutter shows of other studios. It’s fairly close to masterpiece level and a necessary inclusion to the top lists of anyone who considers himself having good taste. SUGGESTION LIST Neon Genesis, Ghost in the Shell, Zegapain and Battle Angel Alita are masterworks that also play along a somewhat similar main idea. Mind game, Aachi wa Sspak and Dead Leaves have a somewhat similar wacky animation. 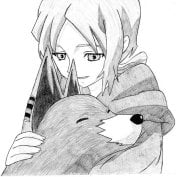