Kagerou Daze: In a Day's - Reviews 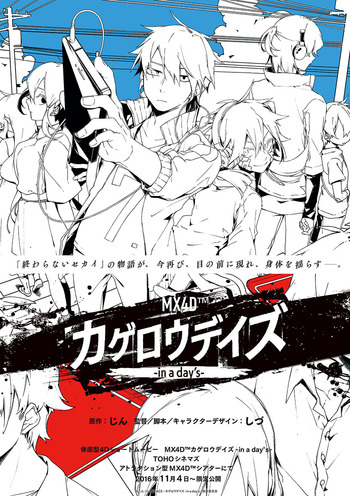 I am a very big fan of Kagepro but although I love the story I have to do this review with hindsight. I am the one who fan-tanslated the movie into French so I think I'm well enough to criticize it.

Chara Design/ Animation: the film was made for viewing in 4D-X. Not very immersive in 2D.
The characters' design is cool but with some flaws: they seem to have aged and... Too bad, because it was promising.

Sound : as usual ans hopefully, the sound is good in all medias of the Kagerou Project Serie. The main music (ending), Red, is really cool and I reconize the style of Jin. Maria is singing the movie music as much as 2 years before with the anime, that's good !

The story:
To sum up in a few words: very disappointed!! this is the shopping mall scene with Shintaro and the Terrorists, the most BORING scene of the whole series. It's just with sole technical differences.

Many inconsistencies in the characters. Hiyori and Hibiya are alive (just both of them is not possible unless one is possessed by the antagonist, and it is not the case), a terrorist has red eyes but nothing is said about him, the territorist leader looks like Kido, not to mention the links between the characters of the mekakushi dan.

To fill the whole thing, the action scenes (and even the whole film) ARE VERY VERY CHILDISH (even more than the anime), we don't find the violent ambiance unlike the manga and the novel.

There is one positive scene : Hibiya did a dab, but while punching a terrorist that faint like a lvl1 magicarp...

The ending is extremely improbable and ridiculous too (the plan to win against the terrorists). As for the real end (no spoil) it's not better.

To sum up, there was potential. I was very happy in 2016 to see that the series would not die, but two years later, with the translation, I must admit I was disappointed: the film was completely botched in history.

Nextt  we'll have to do another scene, like a spin-off with the yuukei quartet /post summertime record/battle against the Real antagonist... But please not this scene, it is not interesting at all because it is the introduction of every media of the kagepro !