Kabaneri of the Iron Fortress - Reviews 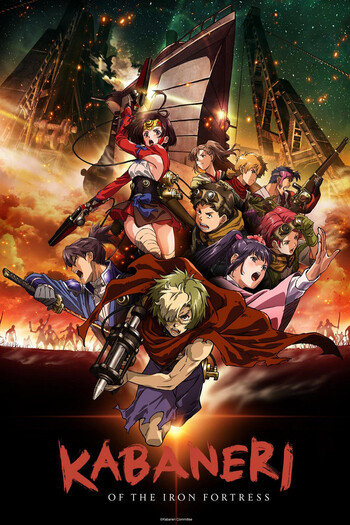 Wit Studio is at it again with their THIRD ANIME THAT IS THE EXACT SAME STORYLINE AS ATTACK ON TITAN. Humanity is dying and has been confined because some more powerful species showed up and is serving human butt on a silver platter. Thus, an angry edgy teen tries to change everything despite having NOTHING special about him, BUT SUDDENLY HE HAS CRAZY SUPER POWERS.

That's Attack on Titan, Owari no Seraph, and Kabaneri of the Iron Fortress. All by Wit Studio. Seriously? Stop it guys, you're better than this. If you gotta make AoT again, just make the second season people have been begging for.

*deep breath in*  I think I have finally decided on what I want to say here.  I have been trying to figure out where this anime belongs in my heart.  I will be less ragey and more deliberate than my previous scribblings

"so what does that mean?"

well, manga is fundamentally different from anime.  Manga does not have animations, often no color, no actual music or sound, no voice actors.  it does have artwork to help visualize, but the most important thing about manga is the story and characters.

"so what about anime?"

Anime takes a manga, which should already have a strong story and characters, and adds all of the fluff.  Great music, great animation, great voice acting.

"so what does this have to do with Kabaneri of the Iron Fortress?"

well, unlike the other two by Wit Studio, this one was not good.  Why?  The animation and artwork? nope.  The music?  nope.  The voice actors? . . . well kinda, but thats because they have to voice act for trash characters.

the problem was the storyline and characters.

"But zombies!! they were so cool, the fortresses and train system was cool! there were some awesome scenes and locations as well!  And the last two episodes!! so cool!!!"

Dont get me wrong, the premise was cool, but the way it was executed and the story that carried us through the premise completely sucked.   This anime clearly had not been battle tested or planned.  It had a cool premise and threw a bunch of stereotypical characters at it.

Story: bad, way bad.  Attack on Titan and Seraph of the End clearly have more thought put in.  This anime is riddle with terrible cliches that horrendously break immersion of the story. In addition to the cliches that pull you out of the fun and intensity of the anime, there are logical holes litering every nook and cranny in the story and characters.

imagine that a storyline is cheese.  Imagine that most anime stories are swiss cheese.  But they only have a few holes, so there is still lots of substance to the cheese.

now imagine that Kabaneri of the Iron Fortress' storyline is swiss cheese, but there are so many holes that there is barely any substance left.  The amount of cheese you get was not worth it. It tastes ok, but its dissatisfying in the end.

Mostly this story just tries to pull on your heart strings, but if you dont 100% sympathize with idiotic levels of pacifism and collectivism, then you are going to want to puke.

I will give this a 3 for premise and effort.

Sound:  Very Attack on Titan like.  I liked it, but it seems repetitive because we have seen that kind of music used well in recent history.  Not sure where I would place this.  Nothing breathtakingly notable though. open theme was ok, but that singer has done better music for better anime.  This category takes a hit in the voice actor department, but then again, the voice actors were having to act out idiotic scenes and terrible characters.

Characters:  another outrageously terrible score.  Again cliched and stereotypical.  unbearably pacifist.  When they were not pissing me off with their bitching and crying they were acting like morons during high intensity and important moments.

OH, AN IMPORTANT MOMENT, I better do the slow dramatic walk towards the zombie.  I should also stick my hand out like im going to choke him, even though I have a gun in my hand.

I dont think that ever happened, but I honestly would not be suprised if it did somewhere in there. :P lel.  The zombies would haul ass at first and then walk in a different scene.  I was waiting for them to stop and do the thriller for us. hehe.

so many logical inconsistencies and stupid actions.  really lame.  pretty much hated all the characters, they seemed so artificial to me I guess.

Overall:  with two really bad scores and a mediocre score this one is not high on my list.  I hope that this review will help you decide on if it is worth watching.  I will not recommend watching this.  I personally thought it was a waste of my time.

With only one episode it is usually hard to decide whether or not an anime is going to be a great series.

However I would consider this to be one of the few exceptions. The first episode is absolutely packed with content, has a plot that hasn't been used to death in other anime already and just absolutely thrills you with the short time it has to make an impression.

I would definitely recommend watching this (especially fans of AOT) and I myself am looking forward to future episodes!

Never have I been so eager for episodes to air. The story thus far has set my heart pounding and left me wanting the next season. And the sound effects and music are off the wall. The main theme song is performed by EGOIST's Chelly！（≧∇≦）❤️😍 looking forward to the next season !!!⚠️Also, to those who take one look and only see a remake of Attack on Titan please give it a little more credit geez! But this is NOT ATO!!!! Koutetsujou no Kabaneri is a dark steampunk fantasy with zombies and vampires!!!!!🚫 NO huge man eating, house crushing Titans allowed!!!!! 🚫

UPDATE (FULLY WATCHED) - ***SEMI-SPOILER*** The ending sucks. I'm confused whether the show is going to have a second season or if it's supposed to be over. And Biba as a villain makes absolutely no sense. I would rate the series overall at 3.75/5, but I'll be nice and round it up to 4.

UPDATE (11 episodes in) - Most of my initial review still applies, but Mumei turned out to be a naive, whiny little b*tch. Shame. Also, it feels a little rushed. One of the biggest issues I have found in animes is that some storylines just do not fit well within the 12 or 13 episode broadcast season. This show is one of those - the latest episode (11) seems entirely rushed and unreal. ***SPOILER SENTENCE FOLLOWS*** Ikoma, the main char, goes from headstrong rebellious in episode 10, to whimpy defeated brat at beginning of 11, to 100% certified badass at end of 11. It's almost bipolar. Too fast, in my opinion.

TL;DR - This show is actually pretty entertaining. Nitpicky criticism aside, I would recommend at least giving it a chance up until episode 4 or 5. If you're not entertained by then, drop it. Also, finally - another anime appears which doesn't treat its female characters as fodder.

The apocalyptic world premise is very popular and can be overused, but the Kabane in this anime are interesting in that they're not like other anime/TV show zombies: they're actually pretty strong and formidable enemies that can fight with intense skill. On top of that, their hearts employ a kind of iron shielding, making the mentality behind fighting them completely different than other zombie shows.

What I'm especially happy about is that, so far, this anime, like other animes by Wit Studio, doesn't employ the following stupid-ass cliches:

The animation is quite gorgeous. Mumei is very pretty, and I don't mean this in a perverted way (especially considering she's 12). The detail they show in both environment as well as character design makes for an enthralling experience. In particular, they're really good at showing light emittance, whether it's light gleaming off of a character's features or the weird glowing of Kabane's hearts.

For the show, there's nothing particularly exemplary about the sound - it's quite normal. I do appreciate that none of the voice actors/actresses sound overly whiny or annoying. The opening song is kind of... meh, but the ending song has become one of my favorite songs. It's called "ninelie" by Aimer with chelly (EGOIST). Look it up - I'm in love.

In general, I'm pretty okay with the story and the characters. Maybe my viewpoint is biased, but I'm just ecstatically happy that this isn't another goddamn harem. The main girl, Mumei, has some spine, and although she does need help from MC at times, it's because she's reckless and stubborn, not because they made her helpless for no reason. Some people have given this show low ratings because it has a similar plotline to Attack on Titan... but AoT and Owari no Seraph are anime adaptations of manga whereas this show is an origional composition, so it's not like they've been writing the same stories over and over.

However, the main character, Ikoma, does strike me as pretty unrealistic. I'm not convinced a person can just mutilate themselves not be a psychopath, but okay. Also, the process by which he somehow manages to gain superpowers is...questionable. Seemed really simple - why the hell haven't more people done the same? You could have hundreds or even thousands of Kabaneri running around by now. But then I guess this show's plotline wouldn't exist. So yeah. Kind of meh on the plot + main character.

I am entertained. I'll give it that.