Kabaneri of the Iron Fortress Movie: The Battle of Unato - Reviews 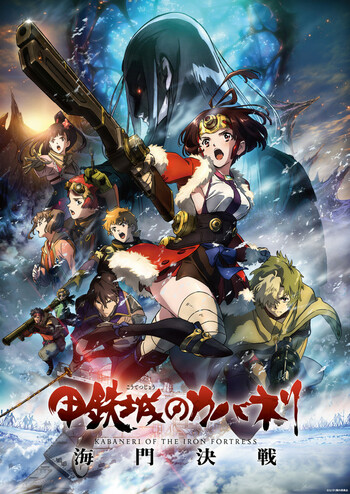 Survival horror has taken all shapes and sizes in manga and anime. One series in particular was Kabaneri of the Iron Fortress, and it was done by the same studio that did Attack on Titan. It was around the half way point that Tetsuro Araki was making mistakes with the characters, such as making the antagonist into a plot device, turning a powerful female character into a damsel in distress, and rushing development with the protagonist. While parts of the first season were messy, the director was able to at least end it on a decent note.

Now, after three years since the release of the first season, we have a continuation to the steampunk survival horror. Was it successful? Personally, after much thinking and reflection, it still fails to have its own separate identity. And that is something I will be explaining.

Story- The story takes place half a year after the events of the first season. Ikuma and his group land at Unato, which is fighting to keep its territory from the Kabane. The Kabane have been acting unusual and Ikuma believes someone is controlling them.

But that's not really all that different though, seeing the characters having to live in these huge fortresses so that zombies don't come and eat them, which doesn't really come off as something new. As much as I like the zombie genre, I feel like Kabaneri didn't bring anything new to the story.

Its just the characters killing zombies, which was established early on in the first season. It doesn't have what Attack on Titan has: great character development, drama, great politcal thriller, mystery. Kabaneri just has what it already has at surface level.

Animation- Wit Studio really knows how to use their budget cause the movie looked gorgeous. The transitions to fight scenes, and all the action that comes with it, they really went all out.

Sound- Wit Studio handled the sound pretty well. Sawano was involved with the soundtracks so no surprise there.

And of course Mumei has to be saved by Ikuma when she gets overwhelmed by one of the Kabaneri. Kageyuki definitely comes off as a tragic antagonist with his backstory, but that's all he's really known for by the end of the story.

Overall- I don't think Kabaneri is going to be getting better as the story goes on. Even more so if it gets another season. I get that it had empathy as a theme for the movie, but Director Araki needs to give the characters a goal in mind. And the characters need to develop more, rather than just be there to kill zombies. Cause if that's the only thing going for it, then its going to get old very quickly.

Kabaneri of the Iron Fortress: The Battle of Unato

These 3 episodes are linked to the events of the first season half a year later. The film deals with the recapture of a huge city fortress in the mountains.

As you would expect there is plenty of dynamism, action and the animations are pure art for the eye. The problem, of course, is that these 3 episodes have almost no plot. A little background for the events and for the most part that was it.

There is nothing to say about the characters either, except that the two protagonists are getting closer and closer. Otherwise there was mostly too much action, which meant that there wasn't really too much exchange.

A nice extension and quite pleasant to look at on a nice evening. However, it is average in terms of content.

This was NOT a good continuation of the first season. The writer(s) could have done the story if they introduced the setting and antagonist better. The entire thing felt rushed after the first episode.

The other two parts though action filled and bloody like the first season the plot was more jumbled and past mistakes that could have been fixed rather easily were blown out of proportion which caused the main conflict.

I mean the main antagonist was only the antagonist because he was protecting his kabane daughter which was cocooned in a black fog core, similar to the one Mumei was in during the previous season final fight with Biba.

The dubbing was also all over the place with syllables and words not matching the characters lip flaps or words being delayed. In the third episode after Ikoma saves Mumei in the cave you can clearly see his mouth mouth for a good second before he even says "Mumei."

I am not shitting on the entire show just this three-part season, skip this you aren't missing a masterpiece.