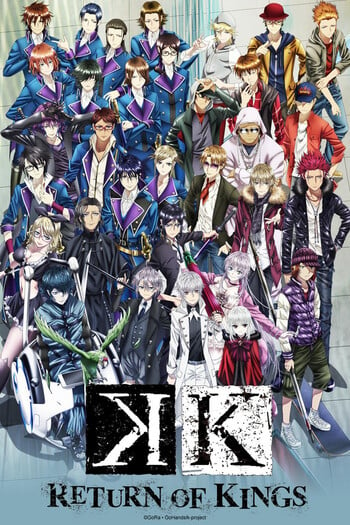 The green clan in K reminds me a lot of the Dollars from Drrr. Just about anyone can join with the use of the internet and the leader is sort of in the air; no one knows much. They are all connected by a cellular device and chatrooms.

Other than that, both shows have supernatural elements. Drrr has color gangs and K has color clans; and they don't exactly get along. Also, Kusanagi from K sort of reminds me of Heiwajima from Drr and Fushimi reminds me a little of Orihara.

Neither anime focuses as much on one character or group like your typical story. Both bounce around and therefor made me feel like I only half understood anyone. However, K has more single character or group focus than Drrr. K has a more defined singular main character.....even if he doesn't do much.

Also, both anime seem to be a bit overhyped imo.

But mainly.....the green clan just reminds me a lot of the Dollars. As soon as they explained the structure of the Green Clan I was like "it's the superpowered Dollars".....sort of.

As I said in the previous K season , in the recommendations:

Both animes are about supernatural and action .

It had been nearly 1,000 years since all the magic in the world disappeared, and most people had forgotten it ever existed. Kohinata Mangetsu is a cheerful high school student who has a pretty positive outlook on life, but she has nothing to call her own-- Because she wasn't good at academics or sports, she dreamed of having something she was good at. On a night where the full moon was shining brightly, she happens to meet another girl with the character for "moon" in her name named Shingetsu Ernesta Fukami. That was also when she encountered the mechanical dolls called "ARMANOX."

Shuramaru thinks he is a normal human, until one day a group of strong fighters appear and Shuramaru's life is turned upside down, revealing a power he never knew he had.

Amane Todoroki is a young girl who is straightforward but also unthinking. She will try her very best in everything and say, "I don't know how to answer you if you ask me whether this can be done. I just believe it can. If not, then nothing will get started." She easily gets stuck in her thinking, but she can also get easily moved at something small and start crying.