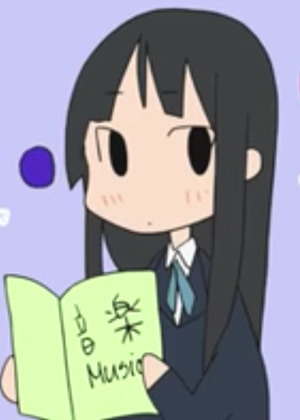 As if the first season of K-On! didn't feel like 90% filler as it is, they decided to make short little clips about the girls favorite activities, joy!

Each episode focuses on three aspects of the girls, Yui's daydreaming, Ritsu's photography, or Mio's underpants (which shows the tone of these dumb little clips.) It's one joke repeated three times, it gets old after the first time. Even when it wasn't a rehash of an overused joke from the series it was just a clip from out of left field, like the girls being on a deserted island and finding different food, there's no way to even stretch that into being related to the series.

The whole series is done in a style similar to Crayon Shin-Chan, except worse. I'd imagine they popped out 3 of these a day for the DVDs without much work.

They use the same background music and sound effects on every clip, further making me believe these were a last minute addition by an intern at the DVD company.

They could have used these to maybe inform us a bit more about the girls, build a deeper back story, but instead they just picked one joke and repeated it multiple time, they squandered a chance to give a nice bridge into the new season.

Even at less than three minutes long and only seven episodes these were pretty much a waste of time. They didn't add anything to the series and weren't even really funny, just dull.

I gave this a 2.5. Not only on this review, but on my own personal page. I did so because I found this little extra tid-bit to be only slightly entertaining, but it got quite old after the first few. If you are a die-hard K-On! fan, you may enjoy it, but I personally found it lacking in not only the humor that the series is known for, but in the animation style. It's suppose to be that way, all cute and what-not... but it just looks as if a 10 year old drew the entire thing. Overall, as I said, if you liked the series, you may wanna give this a try, but don't expect to really enjoy it as much as you would a new episode of the series.

Story: K-On! Ura-On! is a selection of short 3 minute extras based on the original series of K-On! Each one had an unique story, one about the cast being stuck on a deserted island, one when they all discuss Mio's panties etc etc. I didn't find these of particular interest, I was glad when they were over. Yet despite this I DID find myself laughing out loud 3 or 4 times throughout this series, it was ok. But the stories are more for a diehard K-On! fan I'd say.

Animation: The most goddamn awful animation I'd ever seen. I just give it a 3 because the use of colour was ok and the majority of the expressions on the characters were sometimes enough to strike amusement themselves into you.

Sadly, the animation, despite all this, was awful. Worst I've ever seen. It looked like it had been drawn by a 8 year old and this did not have a good effect.

Sound: A simple jingle was used throughout this extra, I think it was trying to create the laid-back mood of Lucky Star. But it couldn't quite pull it off. The song I didn't feel suited and it rather annoyed me.

Characters: All the characters in this show were shown to be almost exactly the same- all ditzy, dumb airheads who were very random. Thankfully as the series progressed a few came out of their shells and individual personalities shone through. Ritsu was shown as the cheeky one of the group and Mio as the big-breasted shy girl who gets constantly picked on. Azuya was a funny character throughout. Its just in the first half of these episodes where everyone seemed the same.

Overall: I suppose these episodes are a nice relaxing thing to watch if you have a spare 20-minutes or so and you don't know what to watch, but I can't really see many people finding these of much interest unless they're pretty big K-On! fans.